The shortage is in part due to a microchip shortage, the Colorado Auto Dealers Association said. 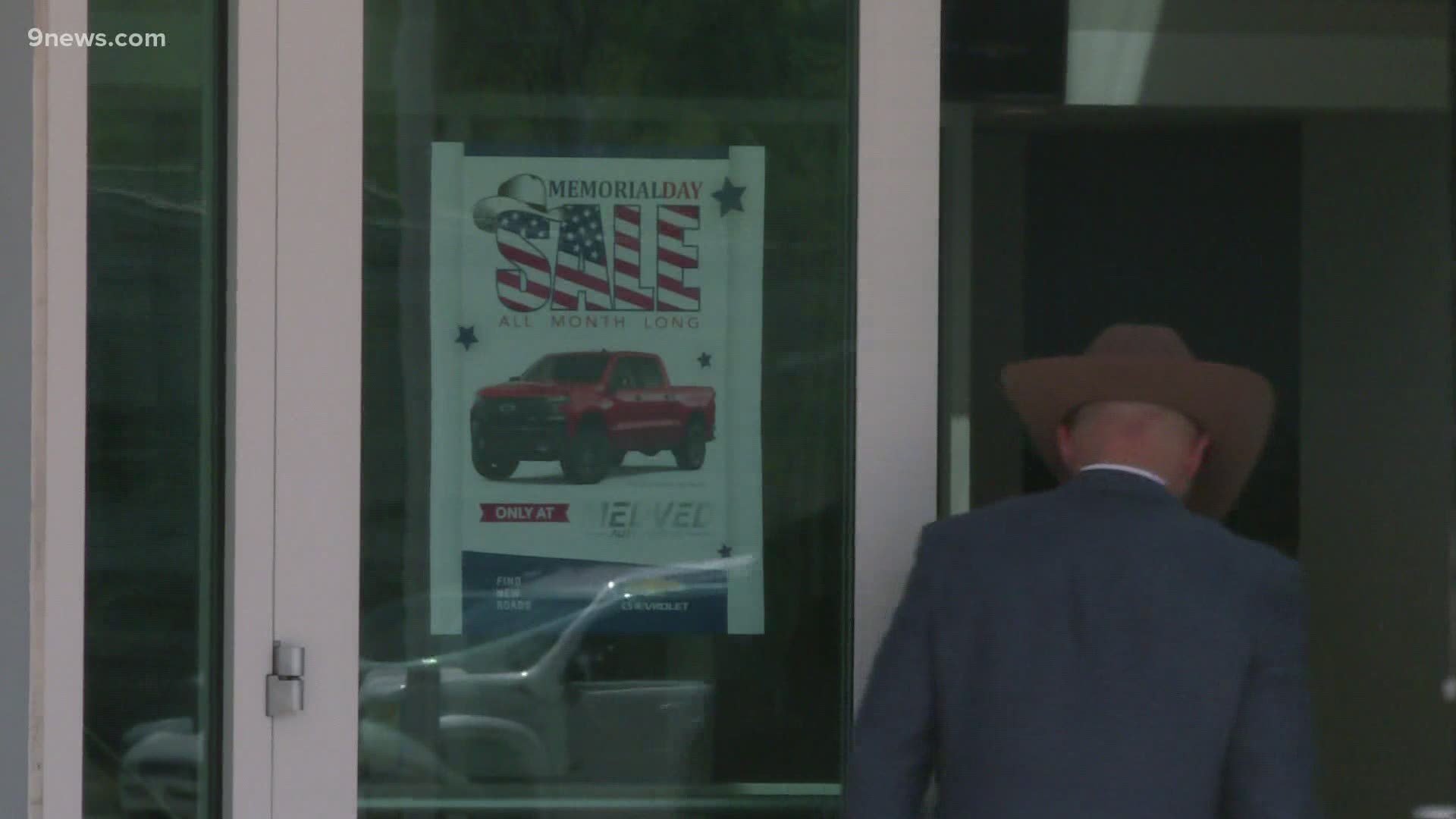 WHEAT RIDGE, Colo. — Even though there's a light at the end of the tunnel for the pandemic, the economic impacts that it left behind remain.

One of which is a microchip shortage that has led to a supply chain issue, paving the way for a car shortage at dealerships that sell new cars.

"Normal year, we'd probably have five or six hundred Chevrolets on the ground. Right now I have about 100," said Josh Letsis, the managing partner of Medved Autoplex in Wheat Ridge.

The ongoing shortage is continuing right into one of the most popular times to buy a car: Memorial Day Weekend.

"It's one of the four busiest weekends of the entire year," he said.

Letsis isn't alone in the current struggle to fill up lots with new cars to sell.

The Colorado Auto Dealers Association (CADA), which represents around 400 dealerships, says several others are in a pinch, but business is still technically up.

"Well, the big thing right now is inventory. Sales are up and we had another record month just reported for April of this year and it looks like May will set a new record as well, which is really a little bit hard to explain because our inventories are so low," said Tim Jackson, the president and CEO of CADA. "We have dealerships that would typically have seven to eight hundred new cars on the ground available for consumers that today only have 70 to 80. So they're literally running 10% of their normal inventory."

He adds that another dealership he talked to this week said they would normally have more than 300 cars on the ground, but they currently have fewer than 30.

"But that shortage of new cars because of the microchip shortage is causing inventory levels to be low and will eventually make it so consumers won't be able to get the car they want or need. And they may have to wait a few months for those," he said.

For Letsis, he says that shortage leading to wait times, can prove to be difficult on a consumer.

"Obviously, we want to sell a car to everybody who walks in the door. So sometimes when we have to explain to them that there's an inventory shortage, you know, we don't want to sound like that prototypical car salesman, "Hey, you better buy right now." But unfortunately, it is that way," he said.

On the other hand, he says prices are still in a good range, which is a positive for consumers.

"The good news is rates are still really low and the manufacturers still have some incentives out there. So that's really good. I anticipate some of the incentives going away as the inventory really starts to dry up. And that'll change your summer shopping for sure," said Letsis. "...Sometimes you'll see some ups and downs with used cars, but new cars, the factories have always been able to crank them out, however many you want. And right now they just can't. They're still playing catch up from COVID..."

RELATED: A gas shortage this summer isn't caused by what you think it is

Overall, Letsis is optimistic that the issue will eventually recover, but likely not until some time in the second half of the year.

"So when it does come back, it's not going to be like COVID, where we had to ramp up the factories again. It's going to come back with a vengeance. And what that means with the used car values is they're probably going to drop pretty significantly, but hopefully our new car inventory, it will stock back up really quickly. Unfortunately, I think it's going to be Q3, Q4 when that finally happens," he said.

What about used cars?

Explained both by Letsis and Jackson, the shortage for new car lots is also having an impact on used car lots.

"The best way to describe the used car situation is that when new car inventories go down as low as they are right now, that causes consumers that can't buy, because they can't find the exact new car that they're looking for, to stay in the late model used car market. And then it puts a greater demand on that used car market and causes the price of those to go up. And that's exactly what's happening in the current marketplace. It's bad for consumers on the car they're purchasing, but it's good for consumers on the car that they have ready for trade on their next new car," Jackson explained.

Letsis has a similar explanation, adding that the shortage is also impacting trade-in values.

"So one of the big things is, is the trade values. I mean, trade values... I sold a vehicle to a friend of mine. He bought his truck two years ago, put 30,000 miles on his truck, I gave him more than what he paid for it two years ago and thirty thousand miles. So if you can find that vehicle that you're looking for, your trade value is never going to be worth more than it is right now," he said.

Jackson elaborated on the shortage, explaining some advice for new or used car customers if they do go to a dealer right now.

"...Definitely shop the market, shop around. If you can't get what you want at your closest dealer shop the next dealer, because somebody is going to have the car that you want and the car that you have for trade is really in demand, more so now than ever before. So in that regard, if you have the late model trade, now is a great time to take the remaining inventory off the new car dealer slot, get that car traded in and make another happy customer out there when they get the older car," Jackson said.

"Now, if you're in the market, I would recommend looking because the only thing that's going to change down the road is going to be the selection. So if you're willing to make a couple of compromises now, you might find the vehicle that you're looking for. Versus if you wait even a couple of weeks, it might be we might have to place that order and you might have to wait four months to get that vehicle," he said.