The Longmont Village will feature 26 tiny houses where veterans can live for free and a 3,000-square foot community center. 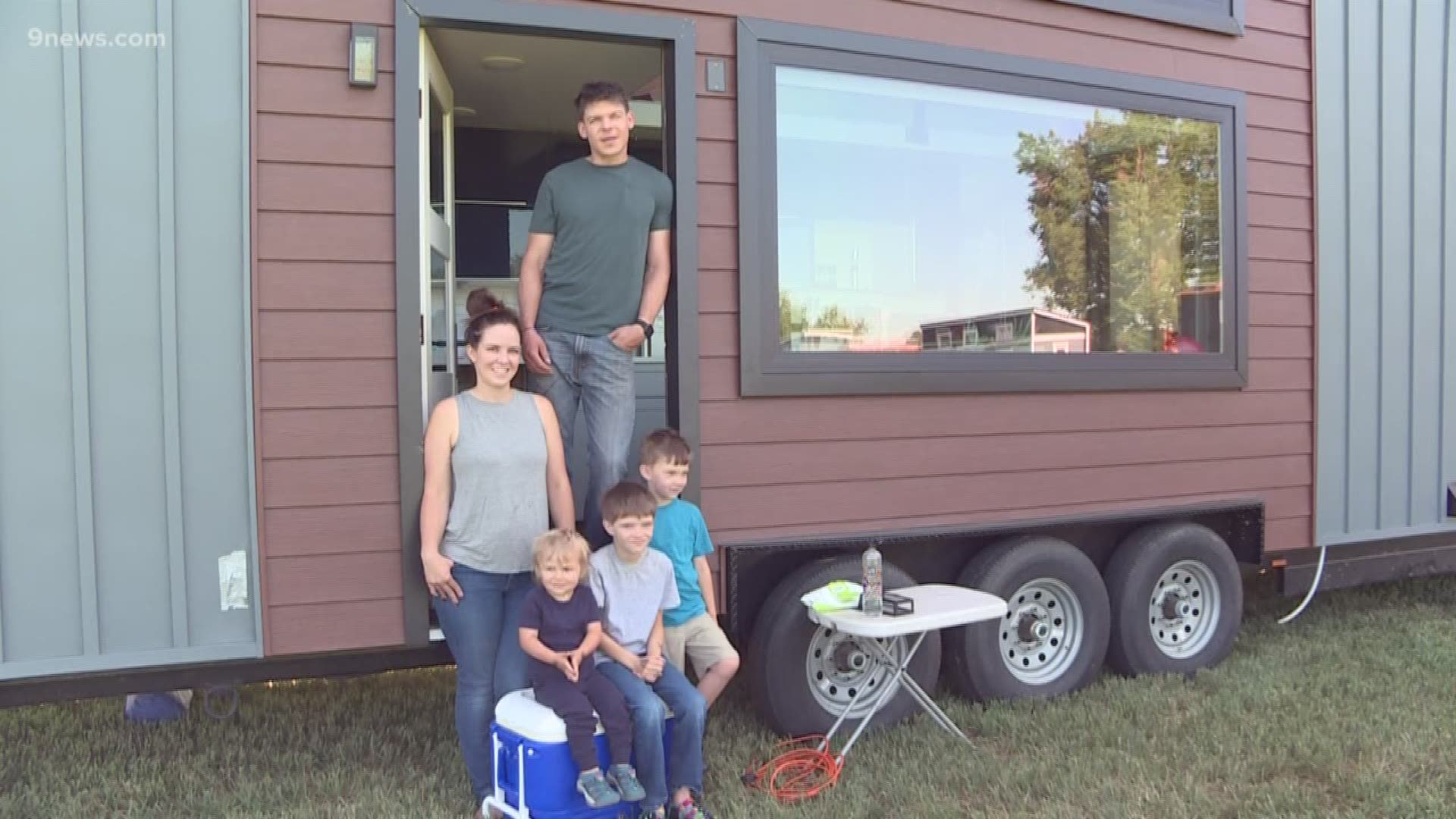 LONGMONT, Colo. — With a few speeches and a few turns of golden shovels, the next chapter in helping homeless veterans began Thursday in Longmont.

A crowd of roughly 150 people gathered under white tents on a dirt lot to mark the groundbreaking for the Veterans Community Project’s Longmont Village. Among those in attendance were Longmont City Manager Harold Dominguez, past and present city council members and Gov. Jared Polis, who said the nation needs to respond to the call to support those who protect us.

> Video above from June 2019: Why people love tiny home living

Numerous speakers, including Polis and Veterans Community Project cofounder Mark Solomon, said as many as 40,000 veterans sleep on the streets each night across the country. But while such a staggering figure is inexcusable, it is not insurmountable, Solomon said.

That’s where the Veterans Community Project comes in.

When completed, the Longmont Village will feature 26 tiny houses and a 3,000-square foot community center. The Village, which will be off Nelson Road to the west of Home Depot and Target, will feature five 340-square-foot homes for families able to sleep up to seven people, while the remainder will be 240 square feet for single residents. Veterans will be allowed to live for free in the homes stocked with new furniture, appliances, housewares and bedding. Utilities also will be paid.

But the village is more than just homes built with “trauma-informed design.” It also will provide the “sanctuary and emotional space” for veterans and the Veterans Community Project team to address the underlying cause of homelessness. That model is based on the Veterans Village in Kansas City, Missouri.

Using a one-on-one case management model, residents work with specially-trained case managers to achieve “incremental, lasting results in the areas of health and wellness, education, employment, financial literacy, and the development of a personal support network,” the Veterans Community Project states on its website.

The community outreach center in Kansas City last year served about 4,500 veterans, homeless or not, Melroy said. The Longmont community center also will be available to any veteran, he said. A site is still being sought for that brick-and-mortar location, but an outreach staff member is already on the ground in Longmont working with and helping veterans, and Melroy said he is hoping to post a job for a second team member soon.

Longmont is the first location in which the effort is expanding, and it beat out some 700 other cities interested in attracting the Veterans Community Project.

It was an “alignment of stars” that made Longmont the ideal location for the national expansion, Melroy said. Specifically, it was a city government with the political will, a city council that has taken a “fairly progressive outlook in wanting to address homelessnes” and a developer that was intrigued by the idea, he said.

“Those three entities were the ones driving this forward,” Melroy said.

HMS Development donated about 3.5 acres adjacent to its planned Mountain Brook subdivision, with the Veterans Village going in on about 2.5 of those acres, said HMS partner Kevin Mulshine. The remaining land is going to Habitat for Humanity of the St. Vrain Valley for eight homes. Habitat is hoping to break ground on its four duplexes this fall.

HMS also will build all the pre-construction infrastructure — roads, water, sewer, gas, etc.  — for the site. The land and work are worth about $3 million, Mulshine said.

The gift to Veterans Community Project and Habitat is HMS’ unique approach to meeting the city’s inclusionary housing requirement for its Mountain Brook project.

Longmont’s inclusionary housing ordinance, passed in 2018, requires that 12% of units in new residential developments be affordable to low- and moderate-income buyers. Developers also can pay fees or donate land in lieu of building affordable housing. It also provides other options, including a voluntary alternative agreement, which in HMS’ case was approved by city council in October.

The city will provide fee waivers for both the Habitat and Veterans Village projects, Kathy Fedler, the city’s Housing and Community Investment Division manager, said via email.

While the land and infrastructure donation will help HMS meet its inclusionary housing requirements, the desire to be part of the Veterans Community Project Longmont Village runs deeper than that. Mulshine, a cancer survivor and founder of the Celestial Seasonings B Strong Ride that annually raises money for cancer patients to receive care at the Boulder Community Health Center for Integrative Care and for the George Karl Foundation, was moved by the passion he witnessed on visits to the Kansas City Veterans Village.

Longmont City Council in 2018 passed a resolution supporting the Mayors Challenge to End Veteran Homelessness initiative, and former City Councilwoman Bonnie Finley tapped  Mulshine to find land on which to house homeless veterans. During a visit to Kansas City with a contingent from Longmont, Mulshine said the founders of Veterans Community Project “kind of blew me off while I was there. They were busy helping veterans. The veterans were more important to them than I was.”

That resonated with him, as did the nonprofit’s definition of a veteran being anyone who took the oath to serve the United States. So much so, that he took a second visit and was sold.

“There was so much positive energy on the campus I thought ‘maybe we can do this,’” Mulshine said.

It took a visit from Veterans Community Project founders to the B Strong Ride at Celestial Seasonings in Boulder to be sold on Longmont, said Mulshine, who takes pride in Longmont being the first city in which the nonprofit is expanding.

It was first suggested by city council that the inclusionary housing tied to Mountain Brook — which will include 459 condos, townhomes and single-family homes — be built at the site. Mulshine said he began researching the number of new housing developments that incorporated transitional housing and found “exactly zero.”

“There’s a stigma attached to having a homeless facility there,” he said.

But in this instance, Mulshine said he sees having the Veterans Village and the Habitat project in the neighborhood as a way to create community connection.

Homeowners will have “access to a pool and a recreation facility, but also will be able to walk down the block to help build a Habitat home or help a veteran with his resume,” he said.

The timetable for Veterans Village construction is a bit altered by the coronavirus — Thursday’s ceremony was originally planned for February — but Melroy said the goal is to start going vertical in late March or early April. Construction will employ a model similar to Habitat for Humanity, using tradespeople to work on those parts of construction that require permits and volunteers to build the rest of the tiny homes.

“We love volunteers. If somebody comes out and actually swings a hammer or paints, they’re engaged and become our best supporters,” he said. “We will try to bring in as many volunteers as we can.”

He expects the work to be completed in waves and that the first veterans will begin moving in by the end of next year.

The Veterans Community Project was founded by combat veterans Solomon, who deployed Friday with the U.S. Navy; Chris Stout; Bryan Meyer; Brandon Mixon and Vincent Morales. Stout was honored as a CNN Hero in 2018. The nonprofit was in the news again last year when former Missouri Secretary of State Jason Kander, considered a rising star in the Democratic Party, dropped out of the Kansas City mayoral race to get treatment for his post-traumatic stress.