Saving the west's open spaces comes at a cost. A Colorado county may have a model for the nation's conservation efforts.

Chaffee County voters approved a sales tax increase of 0.025% in 2018 to address forest health, the impacts of growth and to support working ranches. 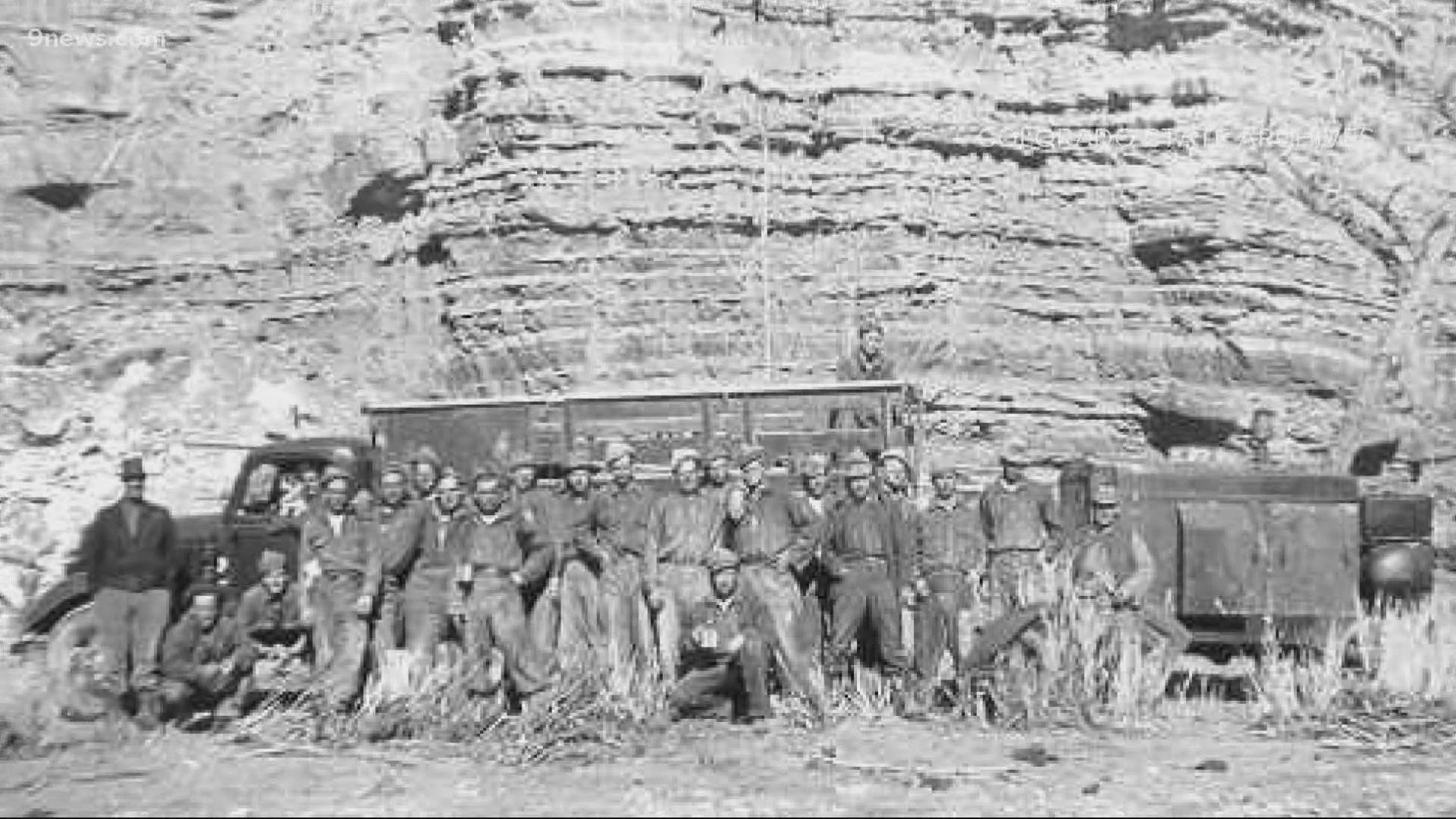 DENVER — Avid Kelly has lived his whole life in Colorado's Upper Arkansas River Valley, where his family has ranched since 1952. The community is committed to helping him and other ranchers there because of the benefits their lands produce for everyone.

Kelly's ranch, about three miles south of Buena Vista, is one of nine enrolled in a 1-year-old program that pays people to not develop their land or sell their water rights. Chaffee County voters approved a sales tax increase of 0.025% in 2018 to address forest health, the impacts of growth and support working ranches, farms and rural landscapes.

>The video above explains how a local congressman's efforts to bring back the Civilian Conservation Core takes on a modern colorado problem, wildfires.

"The fact that they were willing to do a sales tax that would dedicate funding to try to keep these ranches working, I think that’s pretty amazing. I think it's something that could be duplicated throughout the state," said Kelly, whose land was originally homesteaded in the 1870s.

The program is the kind of effort that will be needed to win the support of rural Americans as the White House pursues ambitious conservation goals, a landowners' group says.

The Western Landowners Alliance advocates for people who make their living off the land and for sustainable management practices. After President Joe Biden took office in January, the group issued a roadmap suggesting how the administration can address climate change and conservation while staking out common ground with farmers, ranchers and rural communities that depend on those working lands.

The roadmap, "Redefining Conservation in America for the 21st Century," promotes an approach that stresses the importance of private landowners to such goals as conserving 30% of U.S. lands and coastal waters by 2030, said Lesli Allison, executive director of the landowners' alliance.

The so-called "30 by 30" conservation target, endorsed by numerous conservation organizations and an objective included in a Jan. 27 executive order by Biden, is a laudable goal, Allison said.

"I don't think there's much disagreement to the idea that we want to conserve the lands and the resources that we care about," Allison said. "I think the  question will come down to how we do that in a way that supports the different stakeholders, really achieves the goals in a meaningful way and brings people together around doing those things we agree need to be done rather than dividing people."

Allison said it's crucial to recognize the role private lands play in conservation and take steps to make it easier for ranchers to stay on their property rather than having to sell to developers. She said the alliance hears from people who say there should be a way to compensate ranchers for the benefits their lands provide, including wildlife habitat, open vistas and water.

Chaffee County voters did that when they approved the countywide sales tax increase. The Central Colorado Conservancy, a land trust based in Salida, administers the program, which calls for landowners to protect wildlife habitat and open spaces.

Adam Beh, the conservancy's executive director, said ranchers and others met for a year to develop the program, called the Community Conservation Connection. The conservancy was granted a portion of the sales tax revenue to make annual payments to ranchers.

Participants are paid $14 per irrigated acre and $12 per non-irrigated acre over five years for not developing their land and keeping their water rights intact. The program is open to those whose annual adjusted gross income is under $150,000.

Land trusts usually work with landowners to place their property in conservation easements, which generally provide tax benefits in exchange for agreeing to never develop the land. Beh said the short-term agreement aims to be more palatable for property owners who don't want to sign something that's meant to last forever.

"We're looking for a way for our folks to dip a toe into the water, put their acreage into some conserved state for a period of time," Beh said. "Then we can work with them, talk conservation at a calmer pace."

After just a year, Beh said one of the nine participants is talking about a conservation easement. The Central Colorado Conservancy, which also works on wetlands restoration, is getting questions about the program from groups in other parts of Colorado and in other states, including Wyoming.

The compensation is lower than some state and federal incentives, Beh said, but there's less paperwork and fewer hoops to jump through. The agreement with the conservancy, the county and the landowner, can be finalized in about two weeks. An annual inspection ensures that the landowner is adhering to the terms.

Land trusts and a statewide plan

The nonprofit organization Keep it Colorado is a coalition that includes land trusts. The coalition works to conserve Colorado's open lands and waters, maintain working farms and ranches and large, connected natural spaces. Linda Lidov of  Keep it Colorado said she's not aware of anything similar to the Chaffee County program.

"The majority of our land trusts are working with landowners to put perpetual conservation easements on their properties. We see potential for growing interest in programs like (the conservancy's) to help increase the pace of conservation and get more landowners involved in protecting their land," Lidov said in an email.

The coalition is developing a statewide plan to conserve private lands and ensure they figure overall in such efforts as 30 by 30. While Colorado has huge swaths of public lands -- national parks, monuments and forests as well as federally managed range and grasslands -- roughly 60% of the state's land is privately owned.

"Those ranches are often in some of the most productive valley bottoms in the state. That’s where we can get the most production to raise food and raise livestock," Beh said. "They provide incredible open space, wildlife corridors. Deer and elk come down from the Sawatch Range, come to the river and then cross over to Browns Canyon National Monument."

Kelly's ranch, at the base of Mount Princeton, is a regular stop for herds of elk and pronghorns.

"I’ve got a hundred antelope hanging on the ranch right now because it’s one of the only places open for them to get forage. We have 250 elk across the road, hanging out and coming in our fields at night," Kelly said. "Without these fields and valleys, there wouldn’t be any place for the wildlife."

Kelly said Colorado Parks and Wildlife helps landowners replace fences damaged by wildlife and will build enclosures to protect ranchers' hay. He plans to build a hay barn with the money his ranch gets from the Chaffee County program.

"I'm tired of buying tarps and having the wind blow them off the hay," Kelly said. "Ranchers are typically land-rich and money-poor, so the rancher finally gets the chance to buy the new truck he needs to haul his hay trailer or drive his cows to the sale barn."

RELATED: Neil deGrasse Tyson's 'Search for Life in the Universe' leads to Colorado

Still, many ranchers aren't comfortable taking assistance, Kelly said. "We had to show them why it would be beneficial, not only to them but to the community."

The public benefits become clear as drought and finances drive more farmers and ranchers to consider selling out, Kenyon Fields said. He ranches with his wife, Mary Conover, on a mix of private and public land west of Grand Junction and stretching into Utah. They raise cattle and organic hay, but the drought will likely force them to make some drastic changes.

"We’re basically the last large cattle operation in our neck of the woods that has been able to sustain through the drought, because we’ve done a lot of resting of pastures through the years," Fields said. "Yet, we're finally down to the line, too, because creeks are drying out through the entirety of the fall and weeds are beating out native plants."

Fields, a member of the Western Landowners Alliance board, said technical and financial support could help ranchers hang on.

Another tack is giving landowners flexibility. He agreed to change their cattle operations to accommodate the Gunnison sage grouse living on their land before the U.S. Fish and Wildlife Service added the bird to the Endangered Species List.

"It was voluntary. It wasn't the feds swooping in and saying 'You're going to have to do this or that,' " Fields said.

He doesn't consider financial incentives and support to keep working lands working as handouts. He sees them as payment for so-called "ecosystem services": maintaining wildlife habitat, water sources and land that sequesters carbon. Fields said private lands, which often provide connections between protected areas, such as parks and wildlife refuges, are a key piece in conserving landscapes.

"Or whether it's just someone wanting to keep the West whole, keep the things we love about the West -- the wildlife, open space, clean water, clean air -- you need to keep some of these big places operating," Fields said.