'My grandmother had been a slave girl… but she never talked about it': 108-year-old perspective on Juneteenth

The anniversary holds a special meaning to Easter Hampton Butler and her family. 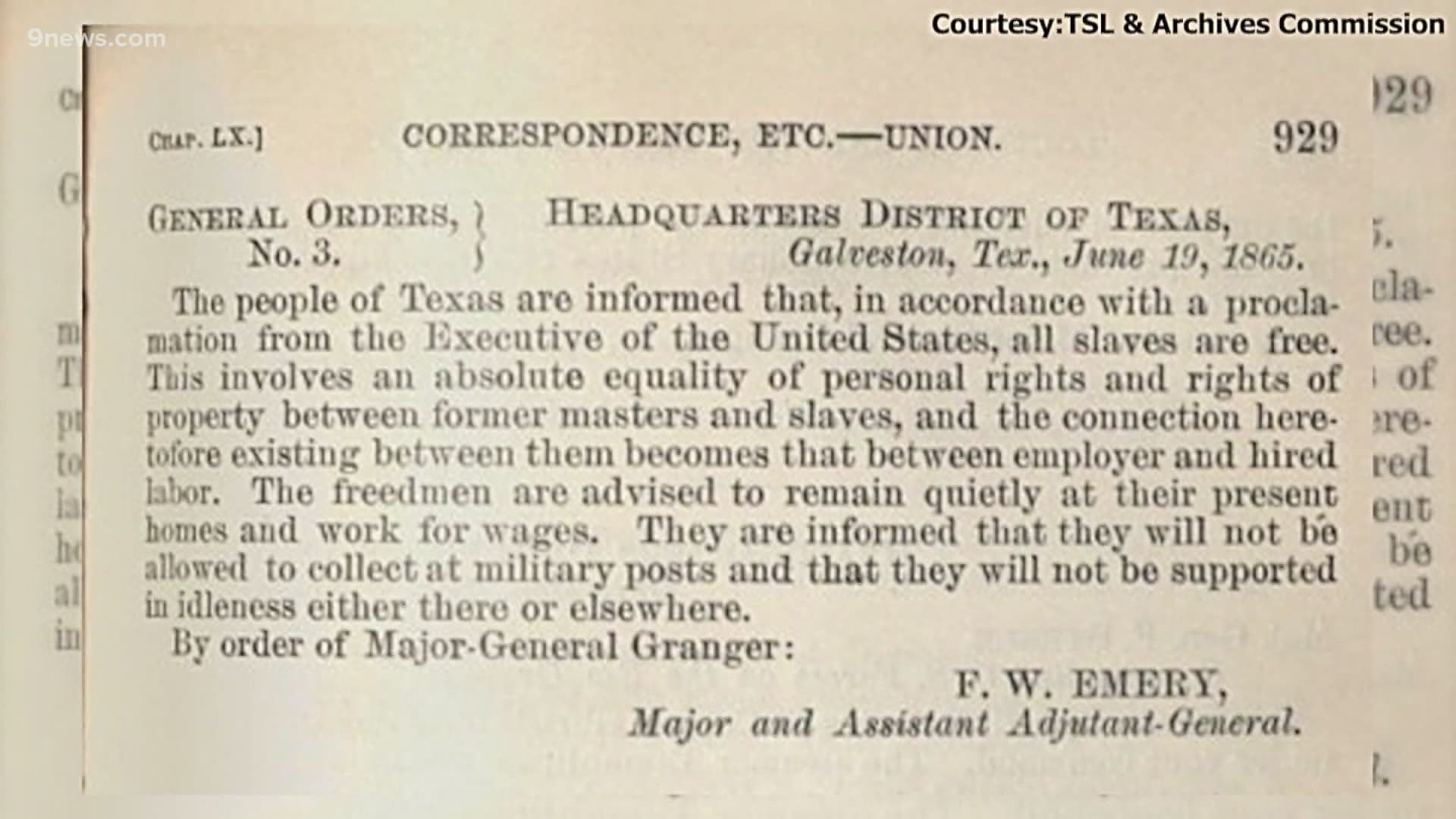 DENVER — Juneteenth is the oldest known celebration commemorating the end of slavery in the United States signed into law by President Abraham Lincoln in 1863.

On June 19th in 1865, General Gordon Granger led Union soldiers to Galveston, Texas with news that the Civil War and slavery had ended. That’s when slaves in Texas had learned they were free, two years after the Emancipation Proclamation was issued.

The observance started in Galveston Texas in 1865 and is now celebrated nationwide.

RELATED: Juneteenth is expected to be the newest federal holiday. Here's a look at its history.

Butler was born in 1913 in Gonzalez, Texas and was named after her late grandmother Easter Hampton, who was born into slavery.

“My grandmother had been a slave girl… but she never talked about it,” Butler said. “We couldn’t ask her what different things meant because she didn’t talk about it… she kept it all to herself.”

Butler said even though the subject of slavery is still difficult to talk about, the anniversary holds a special meaning to her family.

“My great-grandfather came from Africa and he passed away in Texas on a little piece of land that he had purchased from his owners after slavery,” she said. “They were nice enough to grant his wishes by selling him 84 acres of land which the land is still in the family.”

It’s a part of the past that’s affected so many Black people, and is a history her daughter Lee McNeil said is still painful.

“When you think about your family members or your ancestors, the pain and some of the things that they went through… it’s not a feel-good moment,” McNeil said.

Easter Butler and her sister Willie Hampton were raised by their grandmother on the family farm in Gonzalez, Texas which is about 185 miles west of Galveston.

Butler said when she was younger, they went to all the Juneteenth celebrations on the 19th of June in Texas.

“All I was interested in was the food... they had so much food and it was tasty good,” she said. “(I was) seeing friends, school mates and relatives I hadn’t seen for years and years.”

The tradition of Juneteenth was brought to Denver by Galveston native Oltha Rice in the early 1950’s. The commemoration first started as a small family get together, and has now grown into one of the largest celebrations in the West.

“The day’s events went from three days, to four days, to five days because so many people were interested,” said Denver Public Library’s Charleszine “Terry” Nelson. “The population for this event went from about 11,000 people to over 60,000.”

Nelson is the Special Collections Manager at the Blair-Caldwell African-American Research Library in the Five Points neighborhood. She believes the popularity of the celebration here in Denver is because many Blacks like Butler migrated from the South to neighborhoods like Five Points, to escape racism and start a new life.

“Migration is an opportunity for people to come and try to look for a better place to live, look for better opportunities for their youth and look for more jobs,” said Nelson. “Five Points was known for having a lot of jobs and a lot of jobs that African-Americans owned the businesses.”

People like Easter Butler, who first visited the state in 1952 after her oldest son received a scholarship to Colorado College. Butler said she and her husband came out to visit and liked it— so they moved here the following year.

“(We were) looking for a better life,” she said. “There was no work around Gonzalez but farming…no factories no anything.”

Butler said it was a move to a better life that wouldn’t be possible without the freedom of her late grandmother over one hundred and fifty years ago. For her, Juneteenth is more than a holiday, it’s a celebration filled with family history.

“It means that by the slaves being free… I am a free person.”