Many of those named are members of religious orders that were not looked at as part of an independent review released last month.

DENVER — A law firm that has published more than two dozen reports about sexual abuse in the Catholic church released a report Wednesday that includes information about 102 clerics who are accused of child sexual abuse and worked within the Archdiocese of Denver, and the dioceses of Pueblo and Colorado Springs.

The report from Jeff Anderson and Associates includes 95 names. Seven priests in the report are unidentified.

It comes on the heels of an independent review from former U.S. Attorney Bob Troyer, which named 43 Catholic priests who were accused of sexually abusing children in those same three dioceses.

The report from Troyer was limited and did not include religious order priests or other religious clerics associated with the dioceses. It only included "credible" abuse reports since 1950.

The so-called "Anderson Report" is one of 26 released in various jurisdictions where Anderson said there was a "gross underreporting of the perils that have existed both past and present."

The Archdiocese of Denver released a statement about the report that said,in part:

"While the archdiocese is working to reconcile with the past and address historic allegations of abuse through the recently launched independent reparations and reconciliation program, it is objectively false for anyone to claim that children today are any less safe in the Archdiocese of Denver than other youth-serving institutions. It is also objectively false for anyone to claim that nothing has changed within the Archdiocese of Denver in the last 70 years with how we work to prevent, respond to, and report sexual abuse.We are not in a position to comment on hypothetical legislation."

(The Archdiocese's full statement can be found at the bottom of this article.)

Anderson held a press conference Wednesday morning to reveal the report and was joined by several survivors.

Anderson noted that the men in the report were assigned to work in Colorado at some point, but also said the alleged abuse might not have occurred in Colorado. Forty of the 95 men named in his report were members of religious orders.

RELATED: Catholicism in Colorado by the numbers

Anderson and the survivors criticized the report released last month, saying it did not name any bishops or other members of the church who helped cover up abuse. While they all agreed it was a start, they said it fell short.

"It didn't put the spotlight where it belonged, " said John Murphy, who said he was abused by Father Leonard Abercrombie. "It diffused it among all the priests. Where it belongs is on the bishop. I want to see a list of all the priest's names, the known perpetrators per bishop who allowed it to happen. And in many cases, it was bishop, after bishop, after bishop. My perpetrator went on for years, before me and after."

Murphy said he and both his older and younger brother were all victimized by Abercrombie, who was also named in last month's report. He said they served as altar boys and said "Abercrombie" groomed them.

According to the report released last month, Abercombie abused at least 18 young boys over several decades.

Kate Stover and Carol Clear said they were sexually abused by Father Harold White in Loveland. White had 63 substantiated allegations lodged against him, according to the independent report released last month. It referred to White as "the most prolific known clergy child sex abuser in Colorado history.”

All of the survivors pushed for the need for a longer statute of limitations so that perpetrators can be held accountable. None of them came forward until they were adults.

RELATED: Most priests can't be prosecuted, even if they are named in the sex abuse report. Here's why

The Anderson Report was derived from publicly available sources, claims made by survivors to the dioceses and religious orders responsible for the offenders and legal settlements made as a result of claims for sexual abuse and misconduct.

However, in the report, it's also noted that the allegations within it "should not be considered proved or substantiated in a court of law". For that reason, 9NEWS at this time is choosing not to name the men.

The independent report released last month found that from 1950 to present: 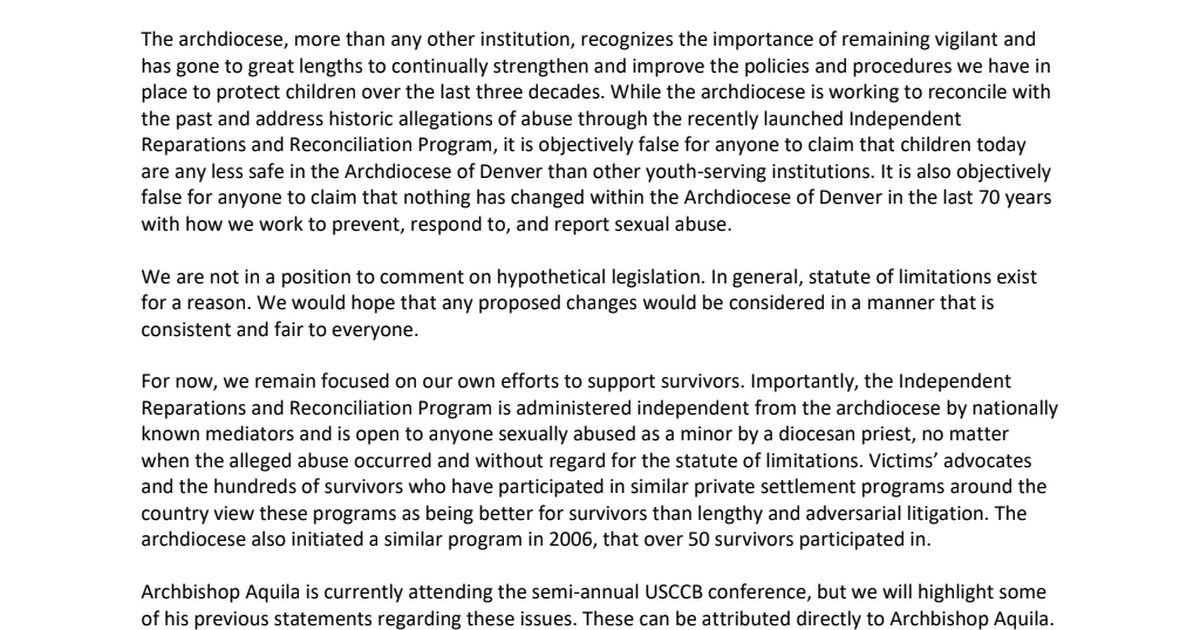