Johnny Hurley, 40, was killed by an officer on June 21 in Olde Town Arvada after he shot the gunman who killed Officer Gordon Beesley, according to police. 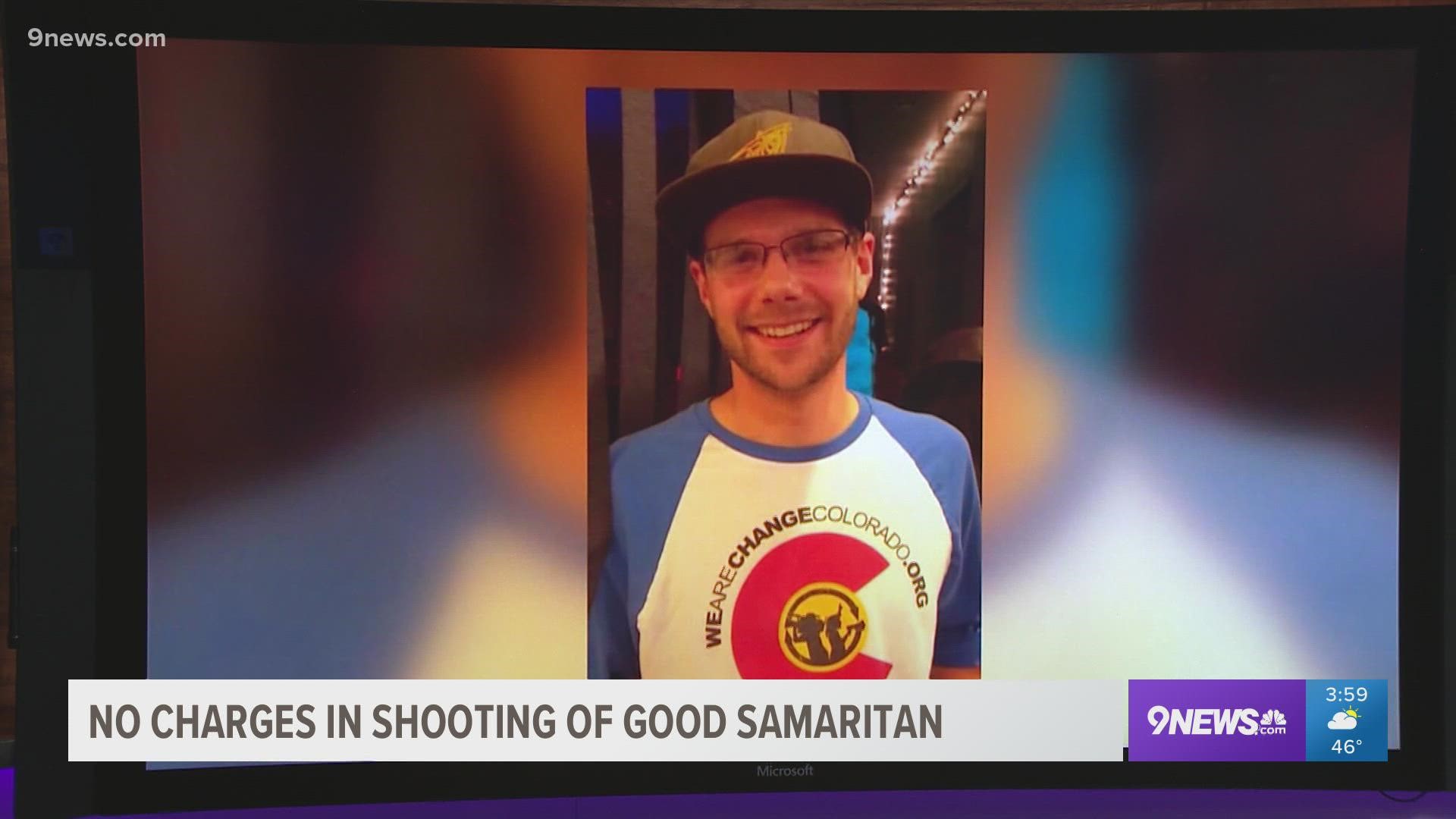 ARVADA, Colo. — The First Judicial District Attorney's Office said Monday charges will not be filed in the deadly shooting of a good Samaritan by an Arvada Police Department (APD) officer in June.

Johnny Hurley, 40, was killed on June 21 in Olde Town Arvada after shooting a man who had just shot and killed APD Officer Gordon Beesley. Hurley had picked up the gunman's rifle and was holding it when an arriving APD officer shot him, according to District Attorney Alexis King.

The officer who fired the shots was identified as Kraig Brownlow.

King confirmed that Brownlow saw Hurley manipulating his handgun and the suspect's rifle before shooting him – thinking Hurley was the gunman.

> Read the full report from the DA

Jefferson County Sheriff's Office led the investigation into Hurley's shooting. Their findings were turned over to the District Attorney's Office in September, who determined the officer was legally justified in the shooting.

"Officers that day saw a mass shooter, heard many rounds of gunfire in broad daylight in the heart of Olde Town Arvada," King said. "Thus, the officer’s decision to shoot Hurley was legally justified despite his heroic actions that day."

9NEWS legal expert George Brauchler said regardless if the person who shot Hurley was an officer or not, the outcome would likely be the same.

"Had anybody in the officer’s shoes seen the exact the same thing take place with the exact same knowledge that he had and engaged that person and shot them, my guess is that they would have been cleared also," Brauchler said.

"In the state of Colorado we have within the law to use lethal force to protect some other person from the imminent use of lethal force against them," he said. 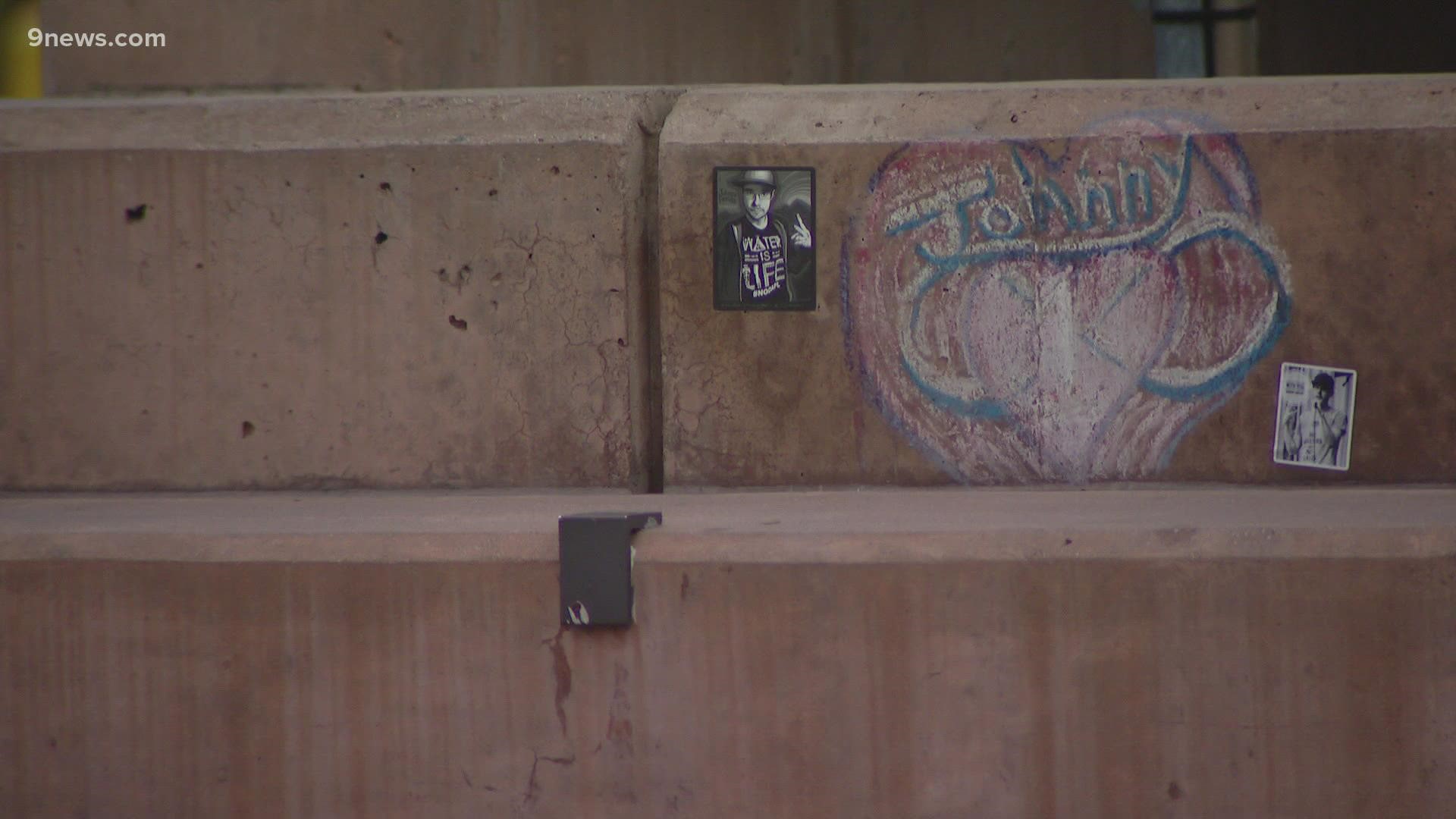 DA King said that three officers were assigned to the community outreach team sub-stationed inside an office building just north of the Olde Town Square where Hurley was shot.

The officers were finishing lunch when they heard a series of bangs, and saw a man in black through a small window in a door pacing around a parking lot, according to King.

The man in black was later identified as 59-year-old Ronald Troyke, who was shot and killed by Hurley, according to the District Attorney's Office.

The officers then decided to engage after seeing the man in black walk to a truck, then turn around and walk back toward the square with an AR-style rifle, King said.

As officers were getting in position, one saw panicked people running away from the square and the man in black from inside the building, according to King.

A second officer took a position at another window with plans to engage, but never saw the man in black, King said.

The third officer remained positioned at the door where officers first saw the man in black, and according to King engaged a man in a red shirt carrying an AR-style rifle. That man was identified as Hurley.

King said her team reviewed more than 3,200 photographs and more than 1,000 pages of reports from various law enforcement agencies before making the decision.

"One thing that became evident throughout our review was that John Hurley, that day, acted like a hero," King said. "Had he survived, we would have praised his bravery in engaging a mass shooter before anyone else was killed. He acted to defend others, and we will remember him for his selflessness."

> Watch the full news conference below

No officers from APD performed critical duties related to the investigation, King said.

An Arvada Police spokesperson said as of Monday night, Brownlow is still on administrative leave.

Brauchler told 9NEWS these are the hardest cases to deal with because everyone is left in pain.

"You can’t compare the two levels of despair, right? Like the Hurley family, this is going to hurt for the rest of their lives," Brauchler said. "And this officer every night going to bed with the idea in his head, 'my God I killed a hero, I killed a hero.' There’s just no winners in this situation."

The following statement was released on behalf of Kathleen Boleyn, Hurley's mother:

"I want to thank the community of Arvada and the nation as a whole for the outpouring of love that you have given to my daughter and me over these past difficult months. This support and love has allowed our family to persevere as we struggle to come to terms with Johnny’s final act of heroism. I also know that many others and the community share in our pain and I honor that grief. I imagine that many people are angry and that is understandable. I would ask that instead of acting out on your anger, that you use that energy to be the change you wish to see in the world. Engage in meaningful conversations that might make a difference in how we all may move forward together. I pray none of us will have to face a situation such as Johnny did, but as we pull ourselves together to move forward in life, consider using Johnny’s commitment to doing the right thing even at the greatest cost to inspire your own actions."

The City of Arvada also released a statement that read in part:

"This incident illustrates the nearly unfathomable decisions society asks our police officers to make as they go about their everyday work. The Arvada City Council and the rest of the City team stand with the Arvada Police Department and support the involved officer and his family.

"In addition, the City team’s focus remains on supporting the family of Officer Gordon Beesley, a 19-year veteran of the APD who was loved and respected by all, especially his wife and two children. The team also continues to grieve with the family of Good Samaritan Johnny Hurley, who took decisive action to protect others without thought for his own safety.

"Finally, the City team remains focused on the Arvada community as we collectively heal from the horrible events of June 21. The conclusion of the DA’s investigation is an important step in the process."

>>Video below from June: 9NEWS breaks down video released from the day of the Olde Town Arvada shooting.

The incident began when Officer Beesley was called to investigate a suspicious person in Olde Town Square. As Beesley walked through an alley, APD said the suspect got out of his truck with a shotgun, ran after Beesley, and shot him twice.

The suspect then ran back to his truck, retrieved an AR-style weapon, and ran back toward Olde Town Square, where APD said Hurley confronted him and shot him with a handgun.