These are some of the unresolved police shooting cases in Atlanta

The cases involve both now-familiar names like Rayshard Brooks and men whose families have been seeking justice for years. 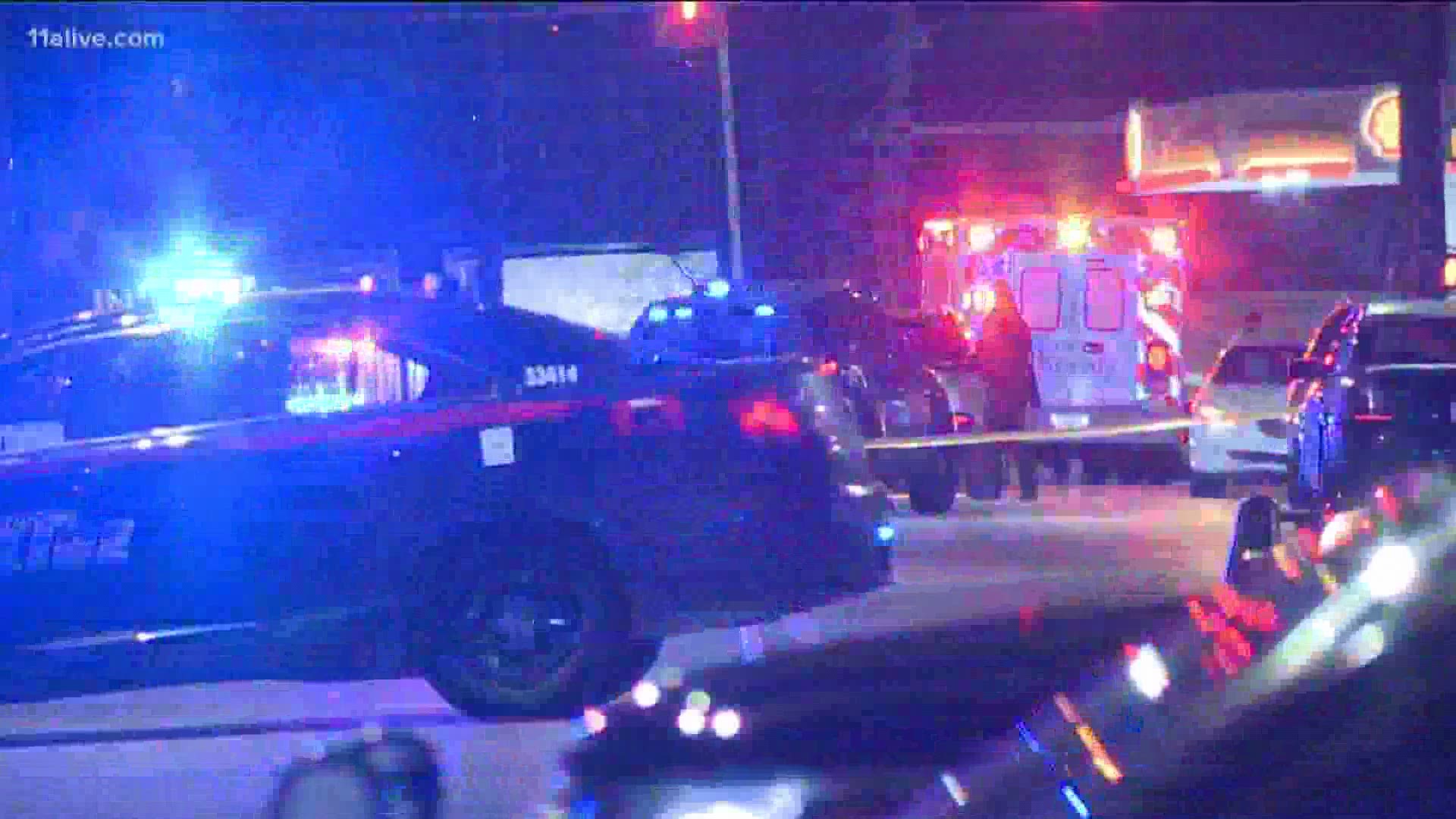 ATLANTA — As demonstrators gathered Wednesday night to protest the lack of charges against any Louisville officers directly responsible for the death of Breonna Taylor, one speaker at a rally noted Atlanta also has a number of police shooting cases where activists feel no one has been held accountable.

Some of the names are more recent, and more familiar, like Rayshard Brooks and Jimmy Atchison. Other cases stretch back years.

Here's a look at some of these outstanding cases that continue to draw calls for justice.

Brooks' death sparked some of the most searing protests around Atlanta this summer, underscored by the spectacle of a burning Wendy's restaurant the night following his death.

Brooks was shot by now-ex Atlanta police officer Garrett Rolfe as he ran from him after grabbing his Taser and discharging it back toward the officer. Brooks was then allegedly kicked and stepped on as he lay dying in the Wendy's parking lot.

The incident had started as a traffic stop for a suspected DUI over complaints of a man asleep at the wheel near the Wendy's drive-thru line.

Rolfe was fired by the Atlanta Police Department and is currently free on bond. As a condition of his bond, Rolfe is under a 6 p.m. to 6 a.m. personal curfew. Brosnan remains employed with the police department.

RELATED: Qualified immunity: Police off the hook for no-knock raid on wrong house

It is not clear when preliminary hearings will be held for either officer.

Both officers were charged by Fulton County District Attorney Paul Howard, who lost his bid for re-election this summer.

Incoming DA-elect Fani Willis has said the case may have to be prosecuted in another county because Howard used the case to boost his re-election campaign, tainting the involvement of the Fulton County District Attorney's Office in the case.

The 21-year-old was shot and killed while hiding, unarmed, inside a closet by now-ex-Atlanta police officer Sung Kim in January 2019, during a joint task force operation with the FBI.

Last October the family said they met with the Georgia Bureau of Investigation to hear the results of the GBI's investigation into the incident, and were told Atchison was given two conflicting commands by officers in the room -- to come out with your hands up and not to move. They said he was following the command to come out when he was shot.

Kim retired from the police force that same month. He has never been charged with anything in relation to Atchison's death.

Atchison's family has filed a $20 million lawsuit against the City of Atlanta and the FBI.

Jamarion Robinson, 26, was killed in 2016 when he was shot nearly 60 times by U.S. Marshals agents, leaving him with 76 bullet wounds.

Robinson had been a college football player at Clark Atlanta University and Tuskegee University, and had no criminal convictions.

The Marshals Regional Task Force said it was serving an arrest warrant on behalf of Gwinnett Police and Atlanta Police, over incidents in which he had allegedly poured gas on the floor beneath his bed and in front of his mother’s bedroom and for allegedly pointing a gun at officers while being confronted at a friend’s apartment complex.

Robinson’s mom said she called police, not to have him arrested, but to get him mental health assistance. His mother said at the time he had been recently diagnosed with paranoid schizophrenia, and that police were aware of this.

A private detective hired by his mother uncovered evidence of gunshots straight into the ground where his body was laying.

No officers have ever been charged in connection to Robinson's death. The U.S. Department of Justice has cleared officers of wrongdoing.

Fulton DA Paul Howard indicated at one point he was reviewing the case, but no charges have ever been filed by his office, which he will soon vacate after losing his bid for re-election.

Last month, family, friends and community members held a vigil to mark four years since Robinson's death. His mother maintains there were local officers involved in the operation who can be prosecuted.

Burns had been responding as backup to a call of a suspicious person, possibly breaking into cars, at an apartment complex off of Monroe Drive, when Rogers came upon him in his car.

Burns put his lights and siren on, and pulled in front of Rogers' car, but Rogers tried to continue around him. Burns fired a single shot into the passenger side of the car, hitting and killing Rogers.

Initially, Burns allegedly told investigators Rogers tried to run him over with a car, but an internal affairs investigation found Rogers posed no threat to Burns. Dashcam video released last month shows there was no attempt to ram the officer's car head-on or otherwise run him over.

Shean Williams, an attorney for the family, said "evidence strongly suggests" he had no involvement in the break-ins that initiated the police call.

Burns was charged with murder. The case was briefly dropped in 2018, but he was re-indicted. No trial date has yet been set. Burns is free on bond with restrictions.

The family is suing the City of Atlanta.

The 19-year-old was killed last year in Union City under circumstances that have never been fully detailed.

According to the GBI, Union City police officer Jerome Turner, Jr. was responding to a call about a fight and, about 20 minutes after arriving on scene, radioed that he was chasing a subject, later identified as Griggs, whom he said had a gun.

When backup arrived, they found Turner wounded and Griggs dead. The GBI said a gun was found on the scene.

In July 2019, the family told 11Alive's Hope Ford that was still the extent of what they knew. The family's attorney, at that time, said he had "interviewed several witnesses that contradict that narrative" that was provided by Turner.

Turner remains on the Union City police force. Last October, he said he was "humbled and blessed" to have recovered from the six bullet wounds he received that night.

That same month, Atlanta attorney Gerald Griggs (no relation) said he'd obtained a Fulton County Medical Examiner's report that listed the cause of Griggs' death as a "contact gunshot to the head." He said he was concerned the official accounting of events "did not sound realistic."

Phillips, a young father, was shot and killed near the Police Annex Building on Donald Lee Hollowell Parkway in January 2017.

According to investigators, Phillips tried to drive off when officers approached the car and one of the officers, Yasin Abdulahad, shot him, as he was clinging halfway in and out of the car. Abdulahad was reportedly in plain clothes.

In 2017, surveillance video was released that does not appear to show things happening that way. Attorneys said Phillips was never aggressive toward officers.

At least one other man came forward to say he'd been beaten before by Abdulahad.

The GBI handed their investigation of the shooting over to the Fulton County DA's Office in May 2017.

Phillips' mother told 11Alive's Kaitlyn Ross in June 2020 that she hasn't heard anything from the district attorney's office in more than a year. Howard said in a statement this summer that he'd planned to bring the case to a grand jury this year before the COVID-19 pandemic hit.

It is unclear how the new incoming district attorney, Willis, will address the case.

Abdulahad is still with the Atlanta police force.

According to the GBI, 31-year-old Oscar Cain was shot and killed by an Atlanta police officer in March 2019, who had been "flagged down by a citizen who advised there was an armed individual in the area of the northbound entrance ramp of I-85 in Atlanta."

The GBI said that as the officer tried to arrest Cain, "he ran and the officer pursued him through the woods."

"Cain did not comply with verbal commands and during the incident, Cain reportedly brandished a firearm," the GBI reported last year. "The officer discharged his weapon, fatally wounding Cain. A firearm was found at the scene."

Cain was known as an activist, and groups have since disputed the official narrative, noting the officer -- Marquee Kelley -- had his body camera turned off.

I’m standing with Jacqueline Sanders. Her son, Oscar Cain, was killed by police in 2019. I asked her what she would want people to know about her son. Oscar’s mother & sister said the same thing:

“If he were alive today, he would be in the streets protesting with the people.” pic.twitter.com/k0dhVuqsYl

In June, Al Jazeera reported he was a "strong advocate for police bodycams" who had traveled to Ferguson, Mo. in 2014, to support the protests there, after the police killing of Michael Brown.

“There’s no bodycam footage, so without that, we only have one side of the story and that’s the officer saying Oscar brandished a weapon,” Atlanta civil rights lawyer Mawuli Davis told Al Jazeera.

Howard told the international news outlet at that time, the case was still under investigation. His mother said she had not been given any updates.

There was never any public report of Kelley being fired. It is unclear if he remains with the Atlanta police force.

The 18-year-old was shot and killed by Atlanta police officer Oliver Simmonds in January 2019 as he allegedly tried to steal an unmarked police car.

His family told 11Alive in 2019 that while they understood the teen was committing a crime, he didn’t deserve to die.

“Even though my son did wrong, it was not left up to him (the officer) to execute my son,” his mother Gaysha Glover said.

She said they met with Howard and then-Police Chief Erika Shields after the incident, but told 11Alive in June, that a year and a half later, an investigation remains open.

Their attorney claims the district attorney won't hand over the surveillance video of what happened, and anytime they request information on the case, they're told "it's under investigation."

It is unclear, as with the other cases, how the coming changeover in the DA's office will affect the case.