The DA's office said there is no evidence the officers acted criminally when they detained a family, including four children, in the August 2020 incident. 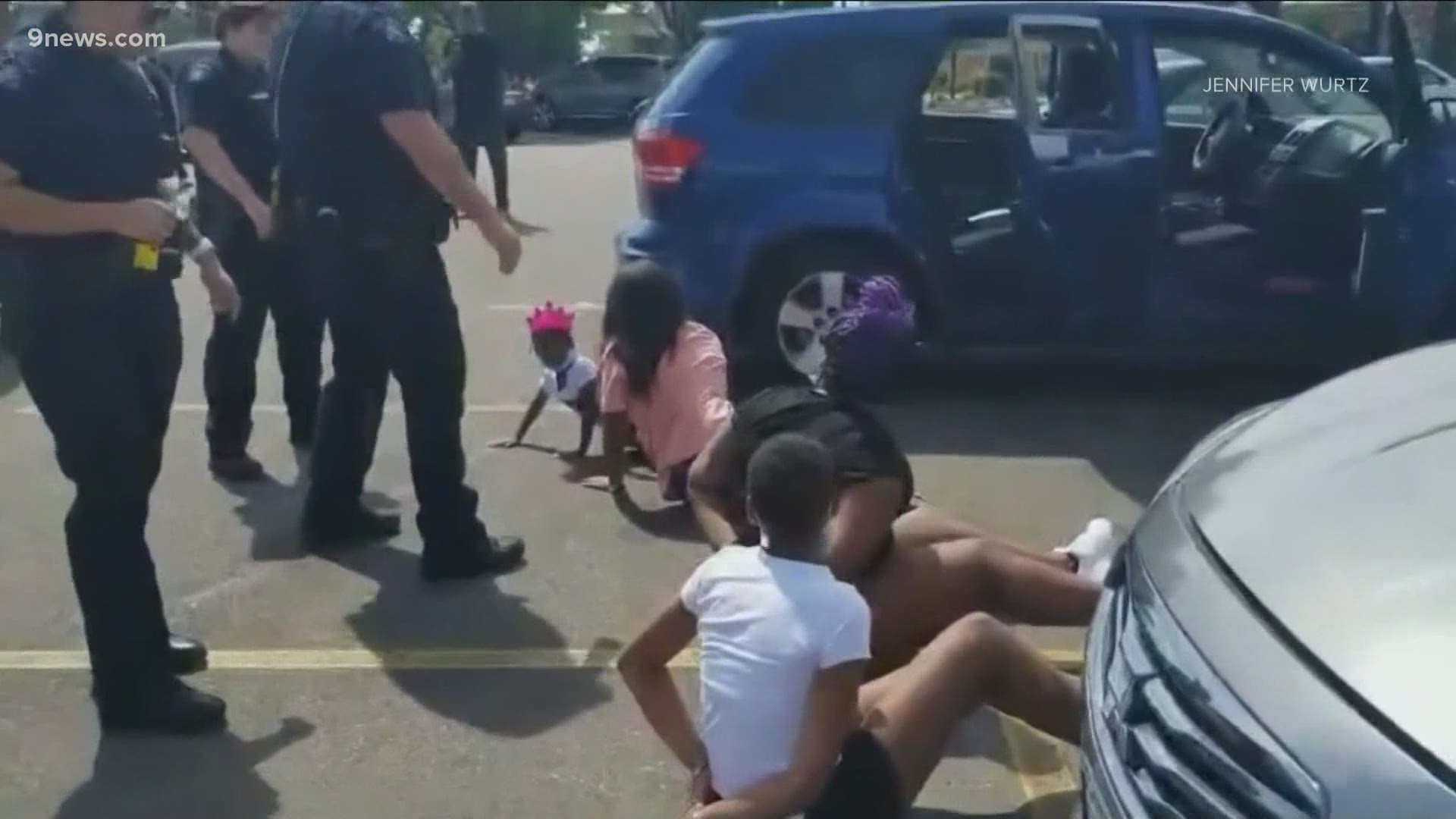 AURORA, Colo. — The Aurora officers who detained a driver and four children inside a vehicle mistakenly identified as stolen in August will not be criminally charged, according to a decision letter released Friday by the 18th Judicial District Attorney's Office.

Aurora Police Department (APD) officers on Aug. 2, 2020, ordered the adult driver of a vehicle and the four young passengers ages 6-17 onto the ground in response to a stolen vehicle report.

APD said the vehicle, which was in the area of the ARC Thrift Store at 16801 E. Iliff Ave., matched a license plate and description they were given.

A video taken by a witness shows the four children facedown on the ground. Officers handcuffed at least two of the children. 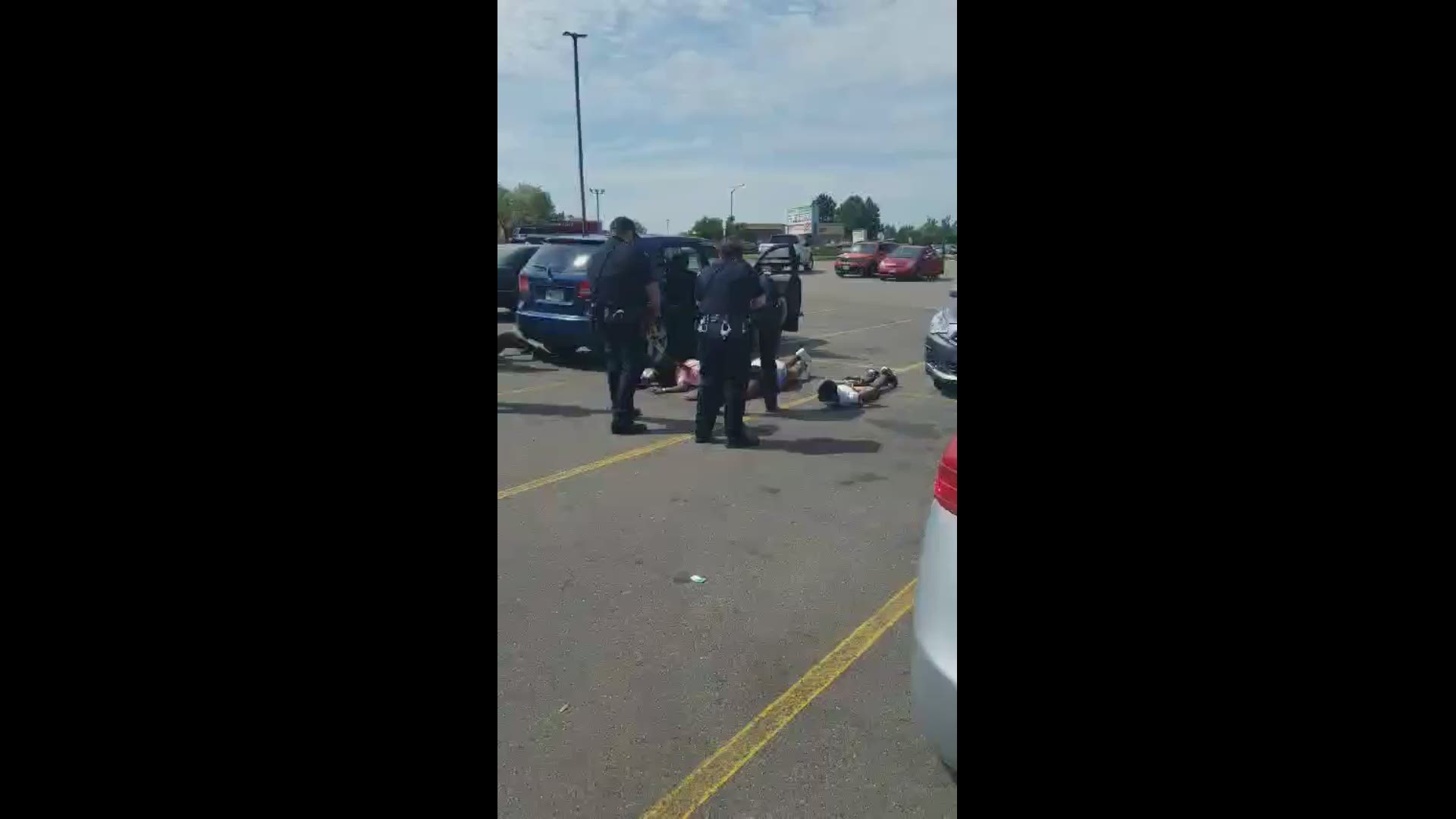 "Despite the disturbing fact that terrified children were ordered out of a vehicle at gunpoint and placed face-down on the ground, our conclusion is that there is not evidence beyond a reasonable doubt that the APD officers involved unlawfully, intentionally, knowingly, or negligently violated any Colorado criminal law," the DA's decision letter says. "It is our hope, however, that APD will immediately undertake a review of their policies to try and ensure that nothing of this sort ever happens again."

"The cops put a 6-year-old girl on her stomach at gunpoint, there’s something wrong with that when they skate," Attorney David Lane said after hearing the decision.

Lane represents Brittney Gilliam, the driver involved in this incident. He said he'd likely be filing a civil rights lawsuit next week against the officers and APD.

APD said confusion may have come from the fact that the vehicle mistakenly stopped was reported stolen earlier in the year.

The vehicle that was reported stolen the day of the incident was a motorcyle with Montana plates that happened to have the same license plate number as the car the family was in.

Officers unhandcuffed everyone, apologized and explained the situation, APD said shortly after the incident. The family asked to make a complaint, so a lieutenant responded to the scene to handle the request, APD said.

A spokesperson for the department said officers are trained when contacting a stolen car to do what is called "a high-risk stop," which is also used when officers know or suspect the occupants are armed.

"In a high-risk stop, weapons are drawn, and occupants are told to exit the car and lie prone on the ground," Agent Faith Goodrich with APD told 9NEWS in August. "There is not a written policy regarding when/how we use this stop. Officers can use discretion based on the information they have at the time."

The DA's decision letter also notes that there is "no evidence" that the vehicle occupants had violated the law or did anything to warrant APD contacting them.

"Neither did they do anything during the law enforcement contact to justify being removed from the car at gunpoint," the letter says. "Based upon the review of the available information, they are blameless in occasioning this encounter with APD.

"What happened to the innocent occupants is unacceptable and preventable, but that alone is an insufficient basis to affix criminal culpability to the two officers involved in the initial contact."

In an interview with 9NEWS following the decision, District Attorney George Brauchler said he hoped APD would consider a review of their policies to try and ensure something like this would never happen again.

"The training they had used on this incident, on high-risk stops, that has to be revisited in light of this," he said. "It was wrong, it was avoidable, preventable, it was something none of the occupants of that van deserved, but having said all those things, that is not enough to make it criminal[ly] actionable."

> The full decision letter can be read here.

"It is my opinion that, given the information they were relying on and the training they had received, the officers involved in this incident were reasonable, prudent, and safe in their choice and use of tactics, weapons, and restraints. All of the officers involved in the incident acted in a professional, safe, and respectful manner in all their interactions with the driver and the other occupants of the vehicle during the encounter. The officers’ actions were consistent with the high-risk stop training they had received. In addition, using high-risk tactics to stop an occupied vehicle when there was reason to believe the vehicle was stolen was consistent with APD training and practice along with other local and national law enforcement policies and practices. The officers reasonably modified their tactics when they discovered that a very young juvenile was in car and quickly removed restraints from everyone involved when they determined that an error had been made. While there were certainly areas in which performance could have been improved and additional training should be considered, I am not convinced that they would have substantially altered the outcome of the encounter."

An internal investigation was opened following the incident, according to APD.

"We are not providing any additional comment or providing interviews on this case as it is under investigation by our Internal Affairs Unit now upon the completing of the DA review."