Aurora police provided updates about 2 officer-involved shootings this month and the August death of Elijah McClean. 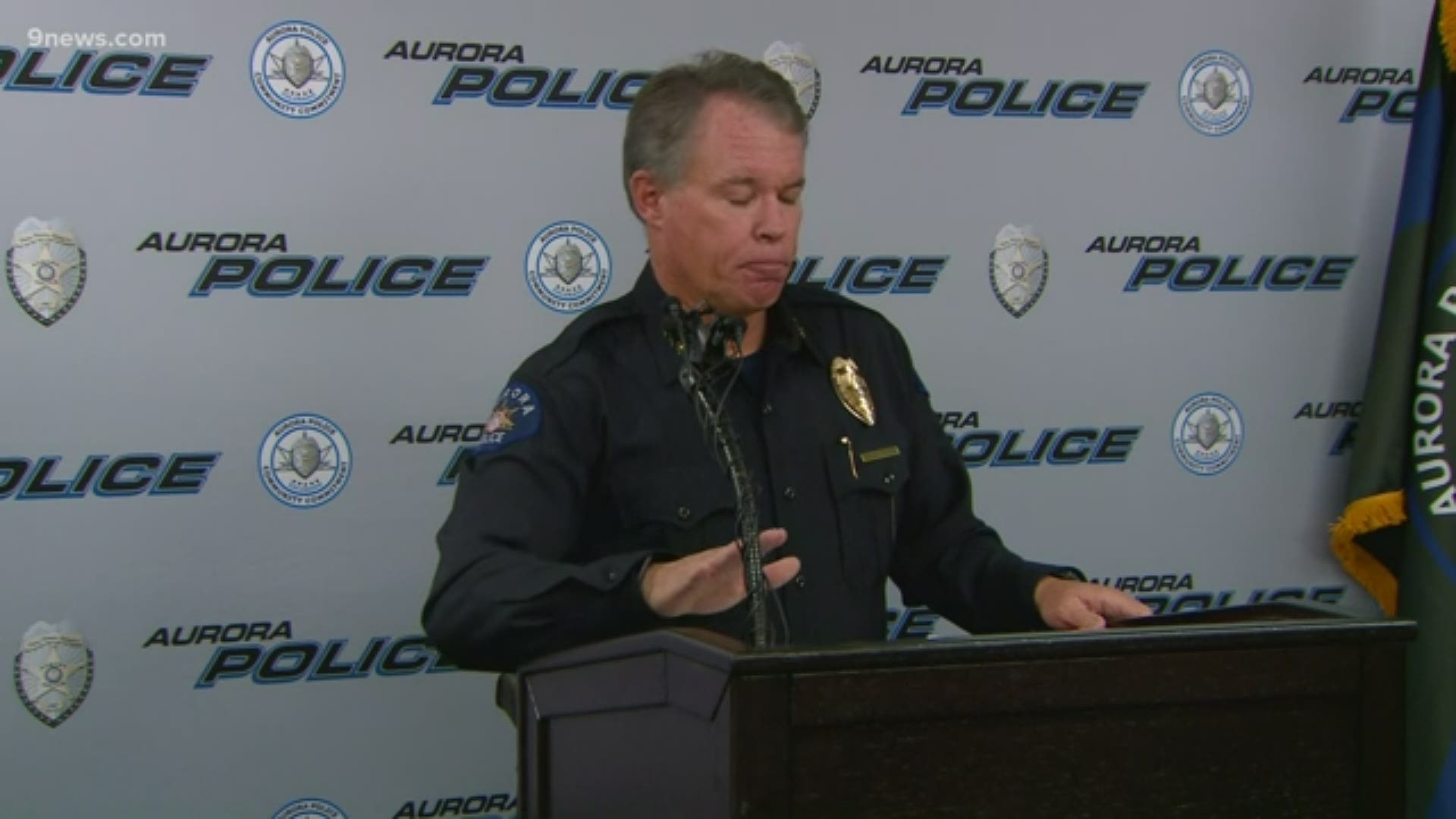 AURORA, Colo. — The Aurora Police Department (APD) provided updates Friday morning on three high-profile incidents involving officers since August in what it said was an effort to be transparent with the public.

The incidents include two officer-involved shootings that happened this month and the death of 23-year-old Elijah McClain. He died in August following a struggle with Aurora police officers who were attempting to take him into custody after responding to a call about a suspicious person.

The most recent incident happened on Oct. 20 when just before 2 a.m. officers responded to a call of a disturbance outside of an apartment building at 9121 E. 14th Ave.

Prior to their arrival, APD was notified by Denver Police that their shot spotter system had detected gunfire in that area. As officers arrived they saw a man armed with a weapon.

"As at least two people are running away from the building, an officer sees a man with what appears to be some sort of firearm," said Deputy Aurora Police Chief Paul O'Keefe. "He does order that person to drop that weapon, again this happens very, very quickly, that officer does discharge his firearm."

The armed man went back into the building through a garden level window and a short time later was helped out of the building and was "obviously injured," O'Keefe said.

A firearm was also found inside the apartment, consistent with what the officer saw, according to O'Keefe.

He said the man is expected to survive his injuries and that the officer who fired his weapon is on administrative leave. Once the investigation is completed, it will be handed over to the 17th Judicial District Attorney's Office for review and determination of charges.

Huff was shot inside a home in the 1500 block of South Bahama Circle in Aurora around 11:30 p.m. Officers went to the home to follow up on an assault from earlier in the day.

"The background on that case is that we received a call from a gentleman who was assaulted at 1570 S. Bahama, he received injuries that required him to go to the hospital. After his release from the hospital he called us to go out there," O'Keefe said.

The victim had lived with Huff for about a month and said he went over there on Oct. 10 and was pulled from his vehicle by Huff and his brother and assaulted, according to an arrest affidavit for Huff.

The victim went to the hospital and was diagnosed with broken ribs and a minor head injury, the affidavit says.

The victim also alleged, according to the affidavit, that the brother had stolen a gaming system, several video games and a coin collection from him. He said he was kicked out of the residence, and believe it was possibly because the brother didn't want to pay back money he had let them borrow, the affidavit says.

Based on information from the victim that Huff was armed, four officers responded to the home on South Bahama Street later that evening to contact him.

As officers approached the home, they said they saw a man — later identified as Huff — in the driveway and then watched him go inside.

The female officer who approached the door, she said she waved at Huff, the affidavit says. She also said she was "certain Andrew Huff saw her and recognized her as a police officer" and noted she was in full uniform.

"The officer recognized that Mr. Huff was looking directly at her as she approached the door," O'Keefe said. "Mr. Huff disappeared for some period of time and then returned with what appeared to be a long gun moving toward the front door."

As officers approached the home, they could see Huff inside through a large picture window, O'Keefe said.

An officer saw Huff with the gun moving toward the door, and the officer who was about to knock on the door ordered Huff to drop the firearm and then fired inside the residence, striking Huff once, O'Keefe said.

"I don't know if Mr. Huff could hear that, obviously the door was closed, the window was closed," O'Keefe said. "However through our investigation, we are able to say with a pretty high degree of certainty, that Mr. Huff knew it was police who were at the residence at the time he went and got that long gun."

Birk Baumgartner, an attorney for Huff, said Huff was scared following an earlier altercation with his roommate and said the officers never verbally identified themselves. O'Keefe said Friday that they "did not announce as the Aurora Police Department."

Baumgartner said he believes the officer who shot Huff was inexperienced and made a mistake.

“What we would expect the Aurora Police Department to do is to apologize," he said. "Nobody think[s] Aurora Police came there to assassinate Mr. Huff… What we think happened is that they showed up to arrest him in this inexplicable manner and that an inexperienced police officer made a mistake and shot Mr. Huff because she got spooked."

Huff faces charges in connection with the earlier assault, O'Keefe said and could face additional charges.

The officer who fired his weapon has been with the department since June 2017 and is currently on administrative leave.

Aurora officers responded to a call just after 10:30 p.m. on Aug. 24 about a person wearing a ski mask and waving his arms at the caller near Billings Street and East Colfax Avenue, APD said an earlier release.

McClain went into cardiac arrest after rescue workers administered medication to calm him during a struggle with Aurora officers.

"I know my cousin, personally," McClain's cousin Rashiaa Veal said last month. "He doesn't like drama. He's not an aggressor. He gives the most respect to anybody. You can be arguing with Elijah and he'll just walk away. He wouldn't even revisit the conversation. He's nothing but positive."

He was pronounced dead on Aug. 27.

On Friday, Deputy Aurora Police Chief Paul O'Keefe said the investigation was "active and ongoing" but said they were still waiting on the official coroner's report before turning the file over the 17th Judicial District for review.

While McClain's family members and attorneys for the family have been able to watch body camera footage from the officers, it has not been released publicly.