The brewery said it has ordered security cameras to find the person responsible for leaving offensive notes about the business. 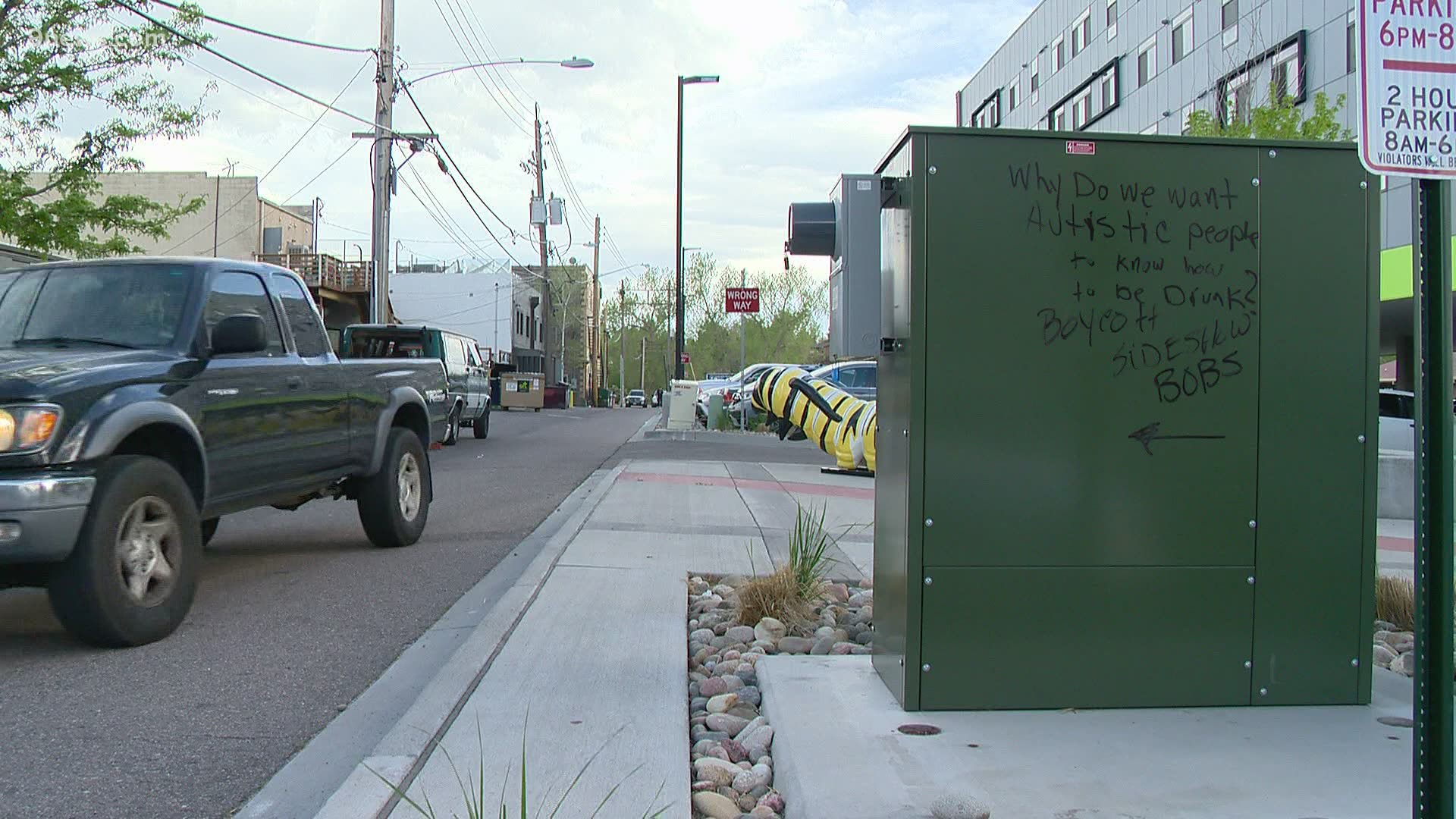 ENGLEWOOD, Colo. — For the third time in a week, Tiffany Fixter said her business had been targeted by anti-autism messages. Brewability Lab employs and caters to people with intellectual and developmental disabilities.

"It's heartbreaking because you can see it hurts our employees," Fixter said.

The Englewood Police Department said it is investigating a series of threatening messages left on cardboard, a utility box behind Brewability Lab, and a dumpster across the street.

"I guess my fear is that it's going to escalate, and there's going to be extensive property damage or physical violence," Fixter said.

Brewability and Pizzability are both owned Fixter and located on-site. She first shared photos of the notes on Facebook on Thursday.

“If the person responsible for the damage is reading this, please STOP,” the business wrote on Facebook. “Your signs will not keep us from operating. We have a strong community of people who believe that people with disabilities have the power of choice. In addition to beer (all below 7%), we sell soda and local On the Fence kombucha. We also sell pizza. We do not pressure alcohol consumption on staff and customers.

“You do not need to support us, but you cannot stop us.”

One of the notes was written on an Xcel electrical box and reads, in part, “why do we want autistic people to know how to be drunk.” Another written on a cardboard box included the phrase, “sign up for autistic AA meetings at our other location.”

Here we go again.... we thought this was a one-time thing. Clearly this person is escalating to property damage. If...

Posted by Brewability & Pizzability on Thursday, May 20, 2021

Sgt. Tracy Jones with the Englewood Police Department said one call regarding the notes came into officers on May 14, and the second came in over the weekend. Jones said the owners of Brewability may have had a confrontation with a patron that possibly led to the notes.

On Friday, Brewability and Pizzability shared another photo on Facebook showing a dumpster near the business that was spray-painted with the phrase “alcohol and autism don’t mix.”

He hit again! 🤦🏼‍♀️ City of Englewood, CO please be on the lookout. Thanks to Sam Hills Barbershop for letting us and to The Breakfast Queen for covering it up! Please contact me if you see any others.

The business said it got help from a neighboring restaurant to help cover up this case of vandalism and is ordering surveillance cameras to find the perpetrator and scouring footage from other businesses.

Aaron Harris has worked for Brewability for several years, and is proud of his job. He said the messages this past week have made him feel unsafe, and he's worried about the situation escalating to violence.

"I've got autism myself," he said. "I don’t let that stuff get to me, what people wrote on there, but I still don’t like it. And it makes me feel unsafe, too."

Friday afternoon, Anthony Scott was working behind the bar serving beers and visiting with customers.

"It's just a community where we just, take everybody and treat them with love and kindness."

Scott, who says he was born with cerebral palsy, said the messages were upsetting to employees, who consider the brewery a safe and welcoming place for staff and customers.

"That’s all we're trying to do," he said. "We're just trying to do our best to make everybody happy."

RELATED: A recommendation: The Brewability Lab

The business initially opened in 2016 in north Denver, and moved to its current location at 3445 S. Broadway in Englewood in 2019.

Fixter said she's been dealing with this issue ever since she started the business.

"When I first came up with the idea, I had death threats," Fixter said. "If you don't like it, just don't come here. You know, we don't want you here if you have that opinion."

> Watch the video above for a previous 9NEWS story highlighting the good Brewability has done for the community.