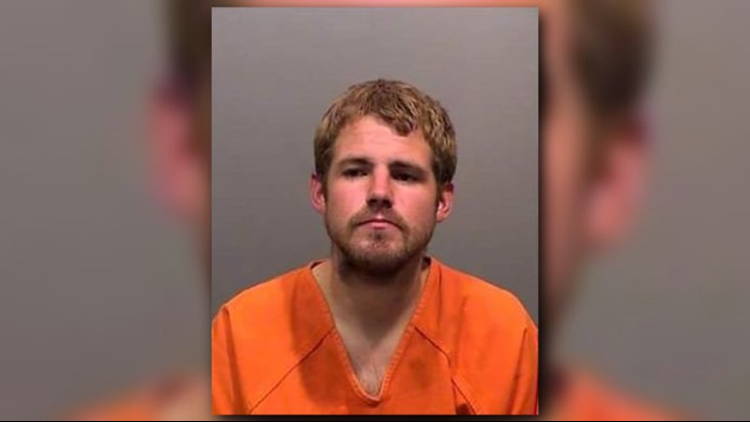 Photo by: Courtesy Jefferson County Sheriff's Office
Adam J. Vultaggio, 27, is accused of breaking into a car and then trying to escape from the scene in a Lyft.

A man accused of breaking into a car in Jefferson County early Tuesday morning was spotted emerging from overgrown bushes and into a Lyft.
Author: Allison Sylte
Published: 10:50 AM MDT May 24, 2018
Updated: 11:17 AM MDT May 24, 2018

KUSA — A man accused of breaking into a car in Jefferson County early Tuesday morning was apprehended after a deputy spotted him emerging from the bushes and trying to get into a Lyft he ordered as a getaway car.

That’s according to a Facebook post from the Jefferson County Sheriff’s Office, which commended the deputy involved for figuring out the alleged ruse.

The incident happened shortly after 1:30 a.m. on Tuesday in a neighborhood near West Quincy Avenue and South Kipling Street. The sheriff’s office says multiple deputies responded after a resident said he saw someone trying to break into a car.

When that suspect was confronted, the resident told deputies he ran away. He was wearing a backpack and yellow hoodie at the time, the resident said.

Deputies searched the area, but didn’t find anyone.

It wasn’t until 30 minutes later that one deputy, who the sheriff’s office identified as J. Allen, saw a Lyft driver come into the neighborhood and drop a woman off at her house. A minute later, another Lyft driver showed up and pulled up to an intersection.

The sheriff’s office says Allen went up to the Lyft driver, who told him he was waiting for a man named Adam but he hadn’t shown up.

Allen then drove down the block and turned off his lights to see what would happen, the sheriff’s office said.

That’s when the sheriff’s office says 27-year-old Adam Vultaggio emerged from the overgrown bushes nearby and got into the Lyft.

He was sweaty, the sheriff’s office says, and was wearing a yellow hoodie and carrying a backpack.

Vultaggio denied breaking into vehicles, according to the sheriff’s office, but nevertheless, he had numerous stolen items with him as well as a knife and drug paraphernalia.

He has since been booked into the Jefferson County jail.

Vultaggio has a Colorado criminal history dating back to 2015, according to court records. He has been convicted of drug possession as recently as January, and has also been accused of identity theft and stealing cars.