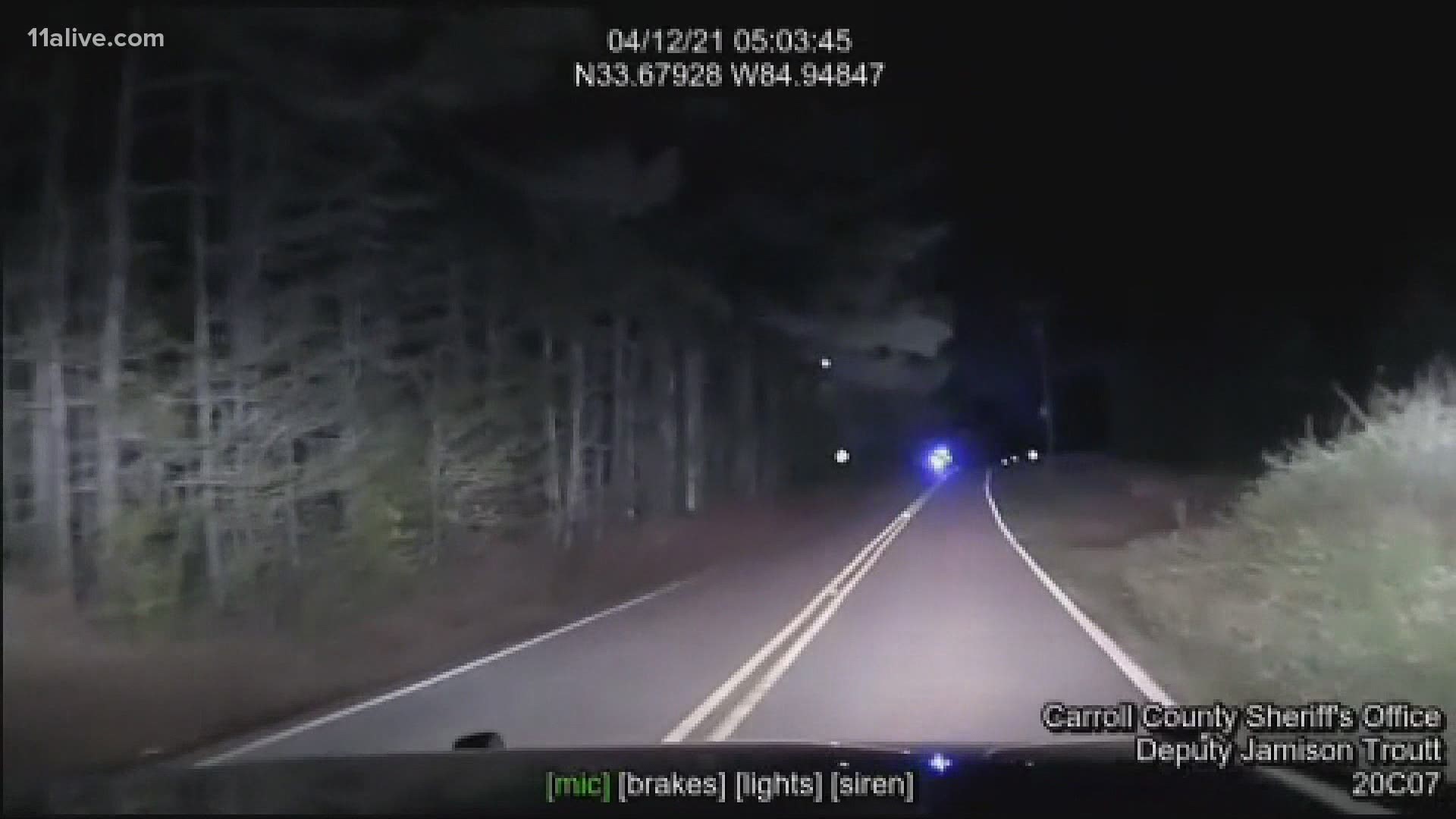 CARROLL COUNTY, Ga. — WARNING: The video in this story, released by the Carroll County Sheriff's Office, may be disturbing to some. It contains footage of a chase suspect firing an Ak47 at deputies and other officers.

The Carroll County Sheriff's Office released dashcam video of a horrific exchange of gunfire between a chase suspect and multiple law enforcement officers.

The video, from Carroll County Cpl. Jamison Troutt's patrol car, shows what happened as he, and deputy Jay Repetto pull up to the suspect, now identified as Pier Alexander Shelton, when the suspect opens fire using an AK47.

"I have seen a lot in my years. Watching this video sent chills up my spine," an emotional Ashley Hulsey, who serves as the spokesperson for the sheriff's office, said.

One of the first shots fired from Shelton disabled Troutt’s vehicle, the sheriff's office said, as he continued to advance, firing inside the vehicle striking Deputy Repetto in the arm. Repetto released from the hospital without serious injury to the arm, and Troutt was not injured.

"If not for the heroic efforts of all Officers and agencies involved and to Corporal Troutt and Deputy Repetto for stopping the suspect, this incident could have resulted in more Officers being injured or killed and the suspects could have posed an even bigger threat to the public as this occurred in a residential area, and at this time of the morning, people are getting ready for work and staff is getting ready to arrive at the school," the sheriff's office said in a prepared statement.

The chase ended near Ithica Elementary School in Villa Rica.

In the video, you see another patrol car, which was identified as Villa Rica Police Officer Chase Gordy's.

When the suspects crashed, they ran before opening fire at Officer Gordy. He returned fire, but was struck twice by gunfire. He was taken to Grady Hospital in Atlanta and has been released.

"It shook me to the core," Carroll Co. Sheriff Terry Langley said. "This one really touched the community as well as the department."

This all started with an attempted traffic stop when a trooper spotted a car going 111 mph on Interstate 20 early Monday morning. After the car was stopped, it sped off and a chase began with the state trooper. After a PIT maneuver, the driver regained control of the car and the passenger leaned out of the window and began firing shots at the trooper using an AK47. His patrol car became disabled.

Carrollton Police Sgt. Rob Holloway then made contact with the vehicle and continued the chase. The passenger fired rounds into the vehicle, striking Holloway. His police vehicle then crashed into a utility pole. He was airlifted to an Atlanta hospital where he remains.

The Carrollton Police Department said Wednesday that Holloway, who was shot in the head, is improving.

Villa Rica was the next jurisdiction involved. When the suspects crashed, they ran before opening fire at Gordy. Authorities said Gordy returned fire, but was struck twice by gunfire.

The chase ultimately ended when the two men crashed the Nissan near the school. Once they crashed, they ran from the vehicle.

That is when the video from Repetto's vehicle begins recording.