David Lesh has been charged with six federal misdemeanors for allegedly breaking the rules on Colorado's public lands. 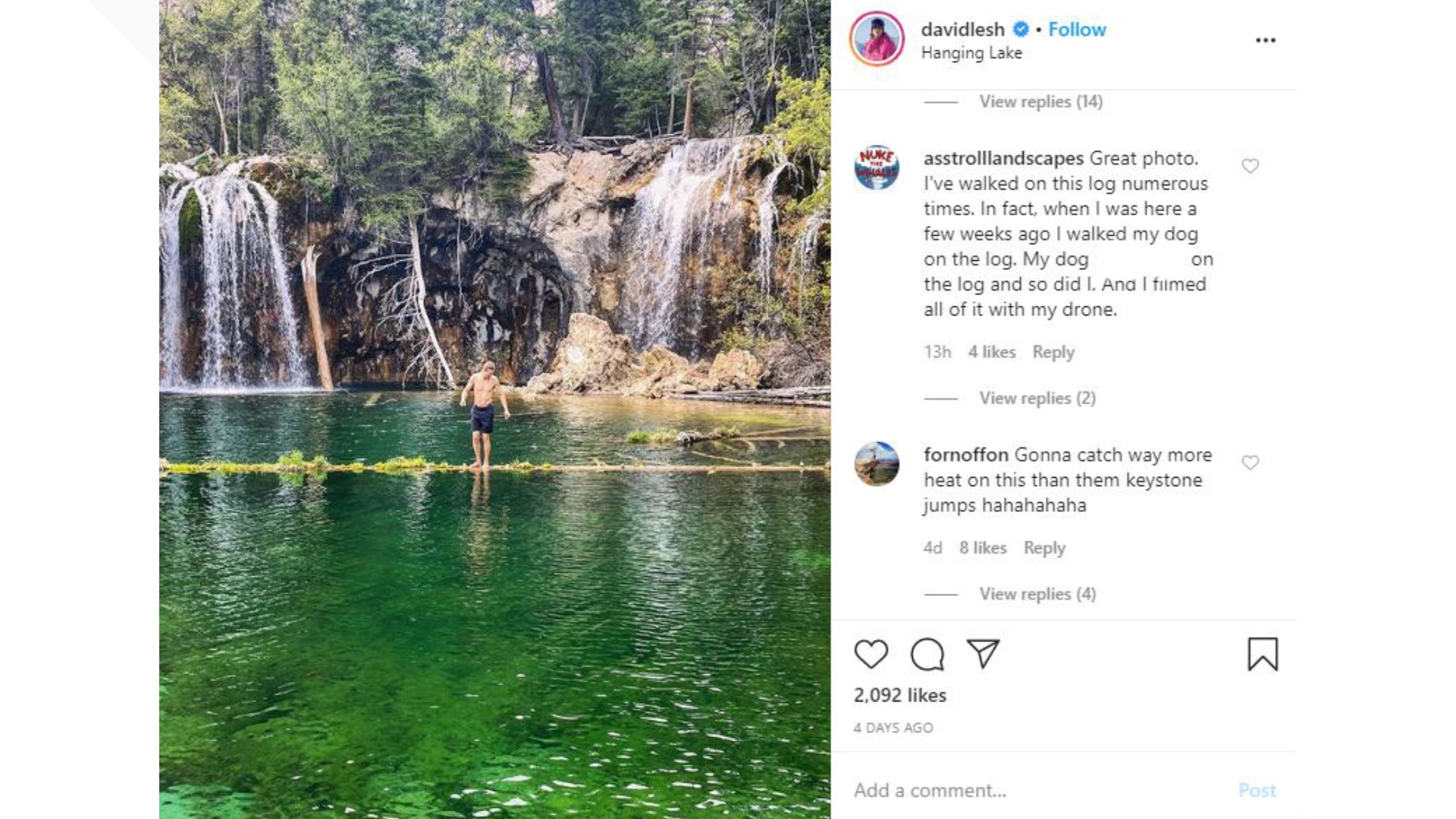 DENVER — The man who faces multiple federal charges after being accused of breaking the rules on Colorado’s public lands has been barred from posting photos of himself or others committing similar crimes on social media.

David Lesh, who shares photos of his stunts on Instagram, appeared in federal court on Friday. He has been charged with six misdemeanors after he went into protected Hanging Lake and for snowmobiling in a closed portion of the Keystone ski area.

During Friday's hearing, the judge said Lesh could face further charges for a new Instagram photo that showed him apparently defecating into Crater Lake, which is famous for its view of the Maroon Bells.

> The video above is a previous 9NEWS story about Lesh's criminal history.

A judge issued a warrant for Lesh's arrest last week after he failed to appear for a scheduled court appearance. He is currently out on a $1,000 bond.

As part of the conditions of the bond, Lesh is now barred from all national forest land. He is also banned from posting any pictures to social media of himself or anyone else violating the law in a national park, monument or any other piece of public land.

The judge will not revoke Lesh's bond on the condition he meet these terms. His attorney, who took the blame for Lesh not appearing at his previous court date, has asked for and was granted to be withdrawn from the case citing "irreconcilable differences."

During Friday's court appearance, Lesh repeatedly tried to discuss the Maroon Bells photo, and his attorney tried to get him to stop, which the judge called "sound advice."

Lesh has until the end of the day on Nov. 3 to sign the conditions of his release and submit them to the court, or another warrant could be issued for his arrest.

His next appearance is slated for Nov. 13 at 10 a.m., where he will face the judge with a new lawyer.

This isn't the first time Lesh has been charged with federal crimes.

Earlier this year, he agreed to pay a $500 fine and do 50 hours of public service for riding his snowmobile in a restricted area near Independence Pass in July 2019.

Aside from his misdemeanor charges, 9Wants to Know previously found Lesh had several arrests on his record.

Despite felony charges related to eluding police in Oregon and destruction of property in Boulder, court records indicate Lesh has avoided felony convictions after plea agreements.

Twenty-two members of the public have written letters to the court in the latest case asking that the judge exercise greater punishment against Lesh.