'I'm very sorry that it happened': DPS superintendent responds to school bus incident that led to arrest of 32-year-old woman

A video appears to show the woman and a DPS employee get into a physical fight, during which he grabs her by the hair and she then throws punches. 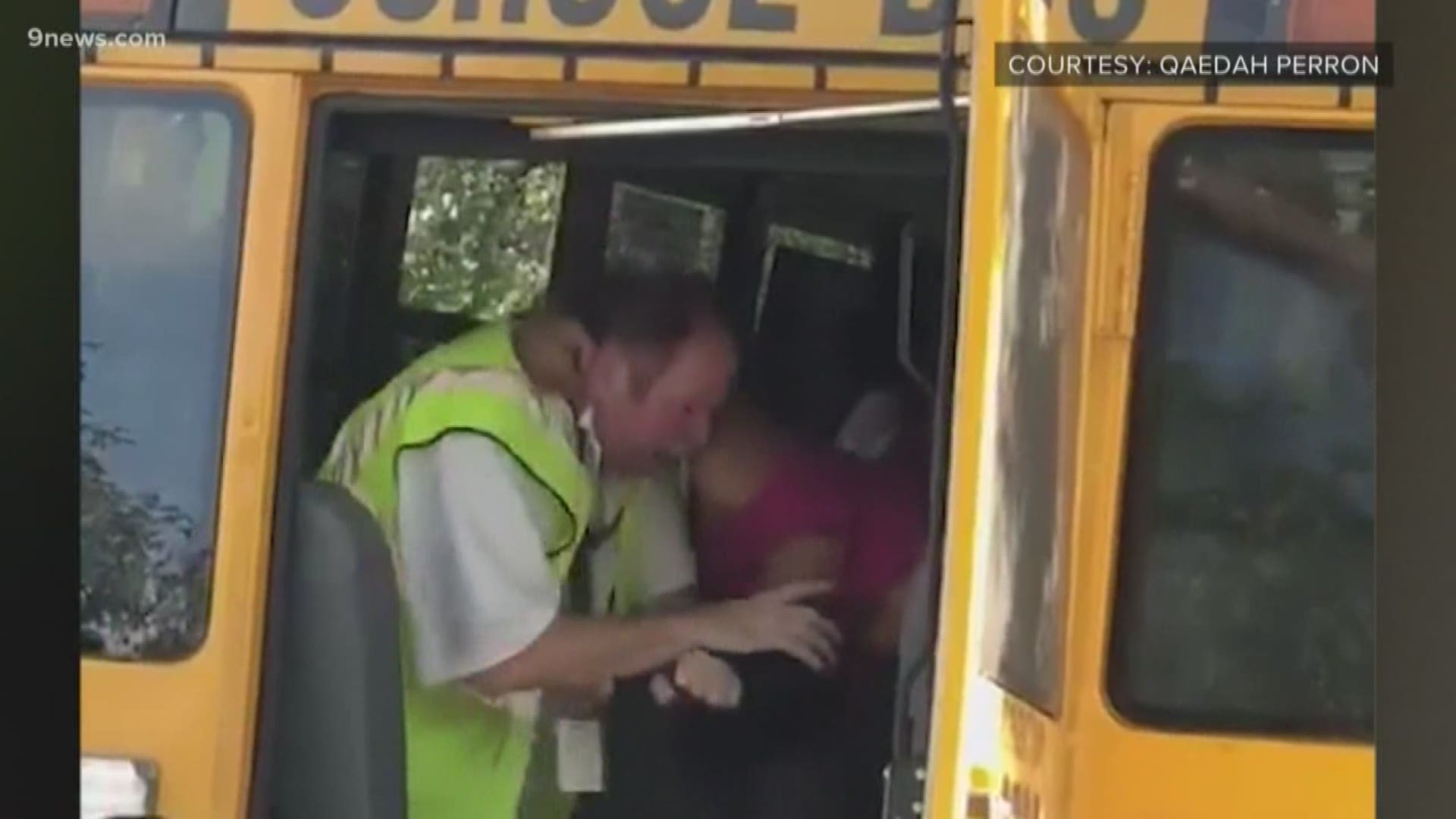 The video shows a bus employee standing on the back of a school bus near the 2900 block of Kearney Street about 4:30 p.m. Sept. 18. The video, shot by a witness to the incident, appears to show children screaming and crying on the bus, and a driver and aide trying to keep the kids on the bus.

A Denver Police probable cause statement released Monday morning says the driver and the bus aide said they had pulled over when some of the students on the bus became unruly.

Janeel Williams said her son was on the bus and he didn't understand why the driver needed to stop.

A letter sent Tuesday from DPS Superintendent Susana Cordova to parents of students at Denver Green School Northfield said a bus aide was "talking to a small group of students about behavior that the aide felt was too loud and disruptive."

"That conversation escalated to the point where students were texting their parents with concerns about the situation," Cordova wrote in the letter.

The incident escalated further when the bus was met by parents who had been waiting nearby for their kids to get off the bus.

The video shows parents talking to the DPS employees at first. One child tried to get off the bus and it appears an employee blocked her before the child jumped down and left with an adult.

"Given that this incident had escalated to the point that it did, with children crying to be allowed off the bus to leave with their parents, the action that was taken only further escalated the situation. And I’m very sorry that it happened," Cordova wrote in her letter. 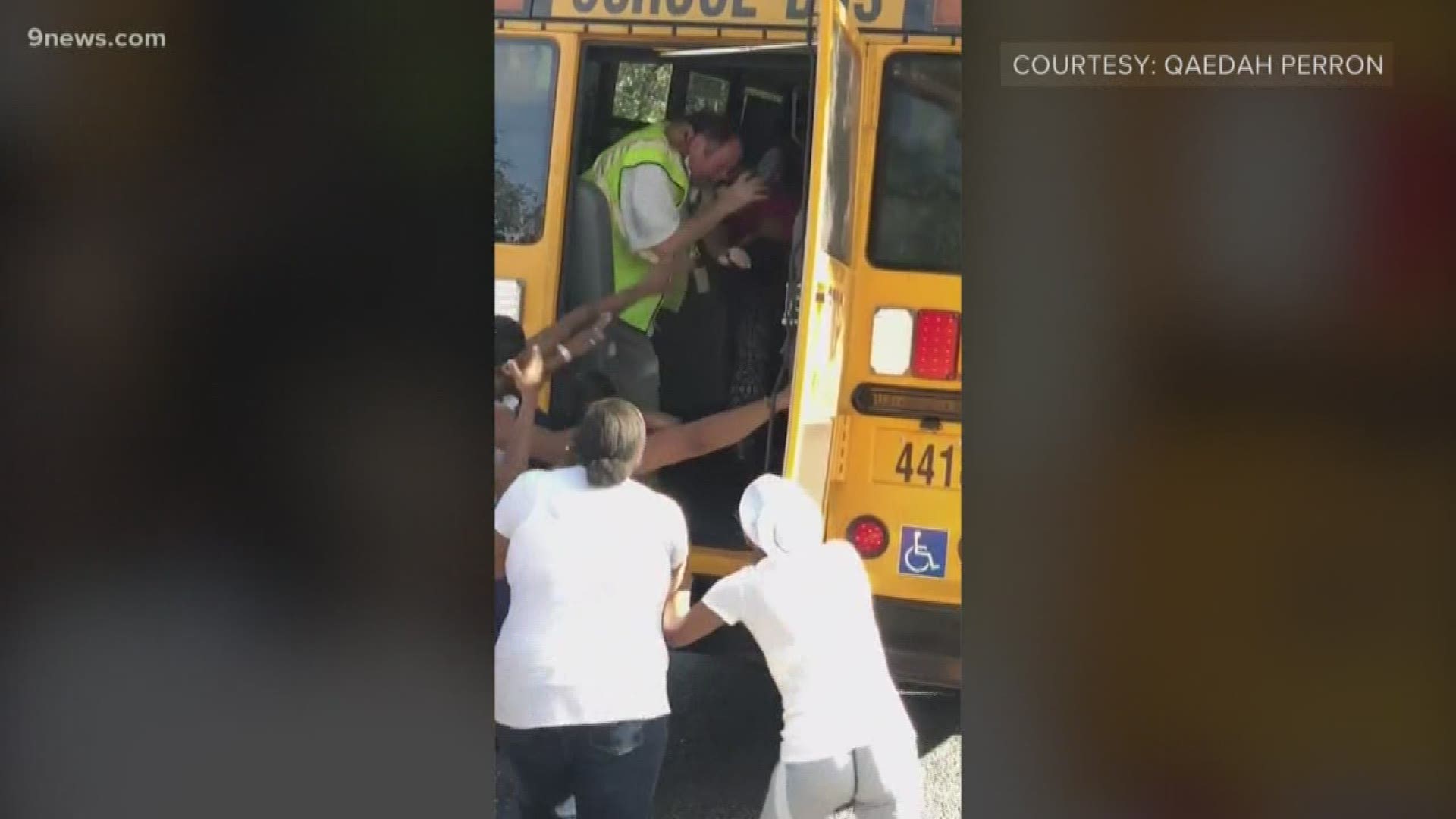 Deputy Superintendent Mark Ferrandino said the district has a procedure for reunification in situations like this, but he said things were very heated.

"It might have been a different way to look at how you handle that situation and just being able to let those kids out to be reunified with those parents," Ferrandino said. "When you watch that video, that's tough to watch. I understand the frustration parents are having."

As the children on the bus became more upset, adults boarded the bus, the video shows. One woman and a DPS employee then appeared to get in a physical altercation, during which the employee appears to grab the woman’s hair before she throws punches.

"The most upsetting part of the incident to me is hearing our students crying out in distress," Cordova said in the letter. "As a school district, we take seriously the responsibility of watching out for our students, any time they’re in our care."

An ambulance transported the employees, and police arrested the woman, 32-year-old Brandi Martin, on suspicion of third-degree assault of an at-risk adult.

The probable cause statement describes the incident differently, saying Martin "entered the back of the bus, where the emergency exit is located, and then attacked both the driver and the driver's assistant."

Martin "repeatedly struck the victim in the face with a closed fist," the statement said.

The victim was over 70 years old and was considered at-risk, according to police. He sustained "visible injuries" to his face and was taken to Denver Health for treatment, according to the statement.

Denver Police said the incident is still under investigation.

Williams said her son witnessed one of the DPS employees touch a female student inappropriately, but she didn't want to go into detail.

"He did say that he did witness an unfortunate incident to where it did make him yell... yell at the particular person and say, 'Hey, don't touch her like that. What are you doing?'" Williams said.

DPS said its Department of Safety was investigating the allegations against the employee.

"We also spent time today looking at videos from the cameras that were inside the bus to understand what happened in that situation," Ferrandino said. "It's clear that was not handled to the expectations we have."

Both the driver and the aide were placed on administrative leave on Monday, according to the district.

"One - the paraprofessional did not return yet to work, so they were put on leave, the bus driver as we looked into it and had more conversations, we felt that the appropriate action was to put them on leave as the investigation continued,” Ferrandino said.

Martin released the following statement about the incident:

"To all my family and friends. I want to thank everyone that has supported me and continues to do so. I will forever be a mother to all children around me and I do believe in being a child of god, helping and loving all as he would. I love each and every family that has told my story, shared my story and has helped me every step of the way. I just want to say hold your babies tight, tell them you love them, be the mama bear you are because there’s nothing wrong with that, that is me."

Cordova's full letter can be found below:

There’s nothing more upsetting to me than feeling like we let our families down in caring for their children. And I’m very upset by the way last week’s bus incident was handled. Every school day, we transport thousands of students on hundreds of DPS buses. Our Student Transportation team strives to provide high-quality service to our community and is a critical part of the work we do to support our students. In providing this service, we focus on creating a safe environment for students to go to and from school. However, it is clear to me that in looking at an incident that happened last week, with students riding our school bus home from school, we fell far short of our standards in caring for our children.

I have reviewed our internal video taken from inside the bus as it was taking students home after school on Wednesday. An investigation is still underway, but it’s clear this situation never should have escalated to the point that it did. Our bus aide was on the back of the bus talking to a small group of students about behavior that the aide felt was too loud and disruptive. That conversation escalated to the point where students were texting their parents with concerns about the situation. And it’s distressing to me that it reached that point. Our district has embraced trauma-informed practices to guide our work, and that means that we want to focus on de-escalating situations in a culturally responsive way and support students through care and understanding. This didn’t happen, and that is not consistent with our values. We did not effectively de-escalate this situation, and, as a result, the DGS students and parents experienced a traumatic event when students were not released quickly enough from the bus and a staff member was injured in a resulting physical altercation.

The most upsetting part of the incident to me is hearing our students crying out in distress. As a school district, we take seriously the responsibility of watching out for our students, any time they’re in our care. In normal circumstances, district staff—including transportation personnel—do not release students to parents unless the normal procedures are followed, to ensure the students’ safety and that they are being released to a parent or guardian. Given that this incident had escalated to the point that it did, with children crying to be allowed off the bus to leave with their parents, the action that was taken only further escalated the situation. And I’m very sorry that it happened.

We will increase and strengthen our training for our transportation staff around de-escalation strategies. I very much appreciate the support and care that Kartal and the DGS-Northfield team have provided to your students and families. My team and I will be doing additional outreach to all families who had students who were on the bus. There will also be an opportunity for families to talk with me and district staff directly during your school’s Cultural Festival on Thursday evening, Sept. 26 at 6 p.m. I will be hosting a meeting just for DGS-Northfield families to talk about this incident and to hear your feedback. It will take place in the Upper Library at the conclusion of the festival. DGS staff will direct bus-riding families to this location at the conclusion of Culture Festival.

We also are continuing to do a thorough review of the incident and how we responded, to make sure we are taking whatever steps we can to try and make sure it doesn’t happen again.

Again, I regret that in this instance, we fell short of the high standards we have for the care we provide to our students. I welcome your feedback and am committed to working to repair the trauma that resulted from this incident."

Editor's note: 9NEWS continues to investigate this situation and will update this article as new information is confirmed. An earlier version of this story did not include information about what was shown in a witness' video.