Two people were killed when their car was struck by another vehicle at a busy intersection. The crash occurred after deputies were pursuing a stolen vehicle, a tactic the sheriff stands by.
Author: Krystyna Biassou
Published: 5:42 AM MST February 6, 2019
Updated: 7:54 PM MST February 14, 2019

LITTLETON, Colo. — Two people are dead, one woman is injured but in custody and another person is at large after a pursuit of two stolen cars in Douglas County during the early morning hours on Wednesday.

Douglas County Sheriff Tony Spurlock broke down the chain of events that set in motion Wednesday's deadly incident during a media briefing on Thursday, where he also praised and defended the work of his deputies.

Around 2:30 a.m. Wednesday, a deputy spotted a silver Jeep in the Castle Pines area, and nearby, saw another car in a driveway with its domelight on. Spurlock said there have been "a lot" of car thefts, as well as thefts out of cars, in the area, which tipped off the deputy and gave her a reason to follow the Jeep as it pulled away.

After following the Jeep for a little while, that deputy attempted to pull it over. Spurlock said it seemed like the driver was going to comply before speeding off and continuing to drive "erratically and dangerously" northbound on Highway 85 near Daniels Park Road.

The deputy realized the driver of the Jeep was not going to stop, and she called for backup. Other law enforcement officers responded and set up stop sticks and secured intersections in an attempt to stop the vehicle, which Spurlock said was brake-checking deputies and swerving.

As one of the deputies was waiting for the Jeep to drive by northbound, a black Mitsubishi sped by him going the wrong way on Santa Fe. That deputy attempted to follow that car, but it was several miles ahead of him and crashed into a passing car at the intersection of South Santa Fe Drive and East Mineral Avenue before the deputy could make contact with it. Spurlock said deputies were only able to pursue that car for about 2 minutes.

Jayne Frances Davicsin, 25, and Ryan Scott Carter, 27, were in the car hit by the Mitsubishi. They both died from injuries sustained in the crash, according to the Arapahoe County Coroner's Office.

Investigators later found the Jeep abandoned in a shopping area with a blown-out tire, but have not located the person who was driving that car. It was stolen from Castle Pines, Spurlock believes, just moments before the pursuit began.

The driver of the Mitsubishi, 20-year-old Deanna Bixby, was taken into custody after the crash. Spurlock said she had several active warrants, but hasn't yet been charged with the pursuit or stealing the car. Bixby is being held in the Douglas County jail under a bond of more than $1 million.

That Mitsubishi had been reported stolen from Aurora two days prior.

Spurlock also said a pistol was found in the Mitsubishi, but since the crash was so violent, it's unclear if the firearm was in a bag or in Bixby's possession at the time of the pursuit.

When asked, Spurlock said he stood by the work and decisions of his deputies and chided the criminals that are endangering the residents and law enforcement agencies in Douglas County.

"This is a tragedy. This is a tragedy on a number of cases," Spurlock said. "We have individuals that come to this county to steal from the people of Douglas County, then put other people's lives in danger, to include my deputies, speeding away, recklessly, armed and then collide with another car that's on the roadway."

An exact connection between the Jeep and the Mitsubishi hasn't been established, but Spurlock said at Thursday's news conference investigators believe they are linked.

"We are believing in regards to the crimes....that the black Mitsubishi and the Jeep were together," Spurlock said.

Anyone who witnessed the pursuit or the subsequent crash is asked to notify the sheriff's office by calling 303-660-7579.

The Douglas County Sheriff’s office shared a copy of their vehicle pursuit policy.

It addresses the risks by saying: “Vehicle pursuits present hazards and risks which could be life threatening and will be conducted only in accordance with the provisions set forth in the Colorado Revised Statutes and this policy. “

The policy outlines reasons that could warrant a pursuit including:

However, the department said deputies should look at alternative methods to stop a suspect or suspects whenever possible. 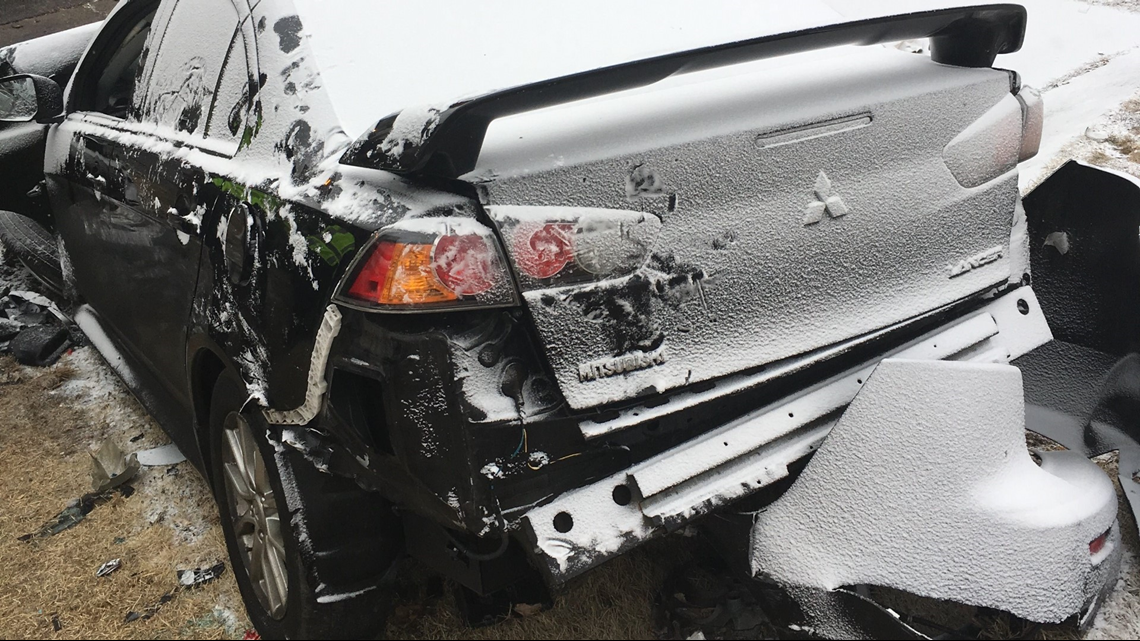