A judge sentenced Dynel Lane to 100 years behind bars for cutting a woman's baby from her womb. 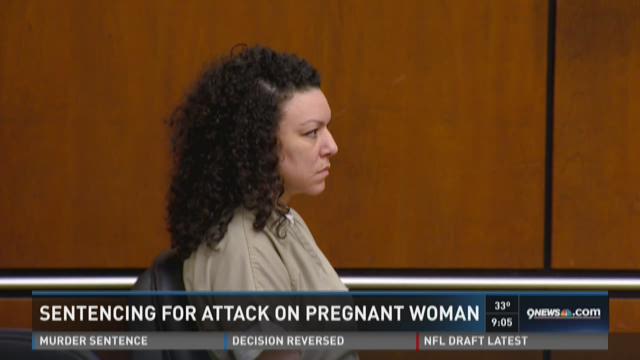 A judge sentenced Dynel Lane to 100 years behind bars for cutting a woman's baby from her womb.

Lane, 35, was found guilty in February of seven counts against her, which included attempted murder and unlawful termination of a pregnancy. Friday, she received the maximum sentence for both of those convictions.

Prosecutors asked for a total of 118 years for all crimes.

The Longmont woman used a Craigslist ad for maternity clothes to lure Michelle Wilkins to her house in March 2015. Lane beat and stabbed Wilkins, who called 911 herself. Wilkins was seven months along in her pregnancy at the time of the attack. She was severely injured but survived. The baby, Aurora, did not. Prosecutors did not charge Lane with murder because the coroner said the baby did not live outside of Wilkins’ body.

Wilkins addressed the court during Friday's sentencing hearing. Before Wilkins began speaking, she displayed a large poster picture on an easel. The court could see Aurora's face as Wilkins said she has waited for Lane to take responsibility for the crimes. She called Lane's actions a "narcissistic fantasy" and told her attacker that she lost the privilege to live in society.

A photo of Michelle Wilkins&#39; unborn baby, Aurora,&nbsp;placed in the courtroom on Friday.&nbsp;

Wilkins' father, mother and sister also spoke. Her father said what Lane did was savagery.

Boulder District Judge Maria Berkenkotter preceded her sentencing announcement by saying Aurora will never go to elementary school or go to the grocery store. Berkenkotter told Lane she stole from the Wilkins family and her assault was "brutal, shocking and cruel."

"It's difficult to imagine anyone would do this," Berkenkotter said.

While Lane opted not to give a statement, friends and family members told the judge these crimes were not typical of Lane's character. A friend read a letter from Lane's older daughter than said her mom did wrong but "I still love you."

During the trial, prosecutors focused on Lane’s obsession with having a baby and told the jury Lane lied about being pregnant. They showed pictures of Lane at a baby shower and said Lane printed off ultrasound photos from the internet. A doctor who saw Lane at the hospital testified that she changed her story about giving birth after an exam.

The Boulder County jury deliberated for about seven hours before returning a verdict.

Defense attorneys did not deny Lane’s involvement in the attack but said it was not a planned, calculated event. The defense hoped the jury would find their client guilty of manslaughter.

In an interview with 9NEWS, Wilkins said of the grieving process, "Sometimes you have to be without that rational thinking and cry and be completely vulnerable to the emotions that become present and show up."