Investigators have a photo from one of the three Black Hills Energy sites that were vandalized Saturday night showing two words scrawled nearby: Earth First! 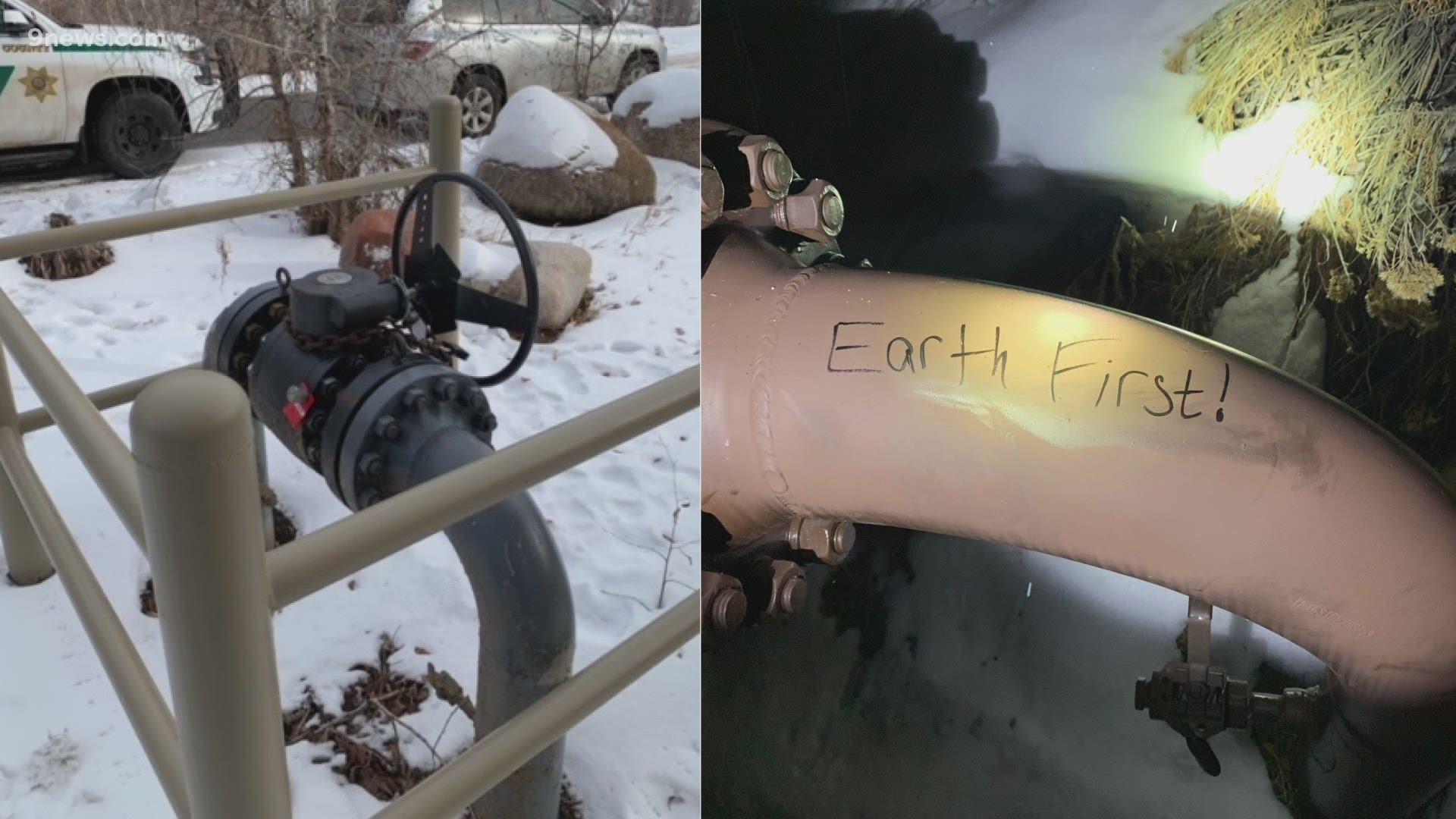 ASPEN, Colo. — Although there has been no formal communication claiming responsibility from the organization, investigators have a photo from one of the three Black Hills Energy sites that were vandalized Saturday night showing two words scrawled nearby: Earth First!

About 3,500 customers were left without heat or hot water by what’s being characterized as a criminal incident, including much of the downtown commercial core. While the Federal Bureau of Investigation is aiding local authorities, law enforcement Monday afternoon tried several times to soften the language being used to describe the event — potential felonies occurred, yes, but not ecoterrorism or even attacks, Pitkin County Sheriff Joe DiSalvo emphasized.

“I know that word’s been thrown around a lot — it’s not the word I would use to characterize this event. I would say it is an intentional act to disrupt gas service and the surrounding area with felony level criminal nature,” he said during Monday afternoon’s media briefing on the matter. “I think ‘attack’ may be a mischaracterization, at least from my perspective and somewhat hyperbolic.”

Aspen Assistant Police Chief Bill Linn assured that the FBI’s involvement in the investigation is because of the expertise the agency offers as it specifically pertains to critical infrastructure, including utilities.

“They have specialty knowledge and capacities,” Linn said.

That’s not to say the perpetrator — or perpetrators, as it’s still unclear how many parties were involved in tampering with the three sites at relatively the same time — won’t face harsh legal consequences if found guilty of the charges, which at this point would include endangering utility transmission, a class 3 felony, second-degree burglary, a class 4 felony, and first-degree criminal tampering, a class 1 misdemeanor, Linn explained.

In other words, “very serious crimes,” he said. The endangering utility transmission charge alone carries a presumptive penalty of between four and 12 years in the Colorado Department of Corrections and up to $750,000 in fines.

Authorities are hopeful that somebody saw something — right now, a single set of footprints in the snow of one of the sites, the photograph naming Earth First! and some other physical evidence comprise most of the investigation. The Aspen Police Department updated its phone tree from the department’s main line, 970-920-5400, to accept tips.

If its self-proclaimed description is to be believed, though, it’s unlikely that Earth First! will reach out in any official capacity, as the organization describes itself as anything but.

“First of all, Earth First! is not an organization, but a movement. There are no ‘members’ of Earth First!, only Earth First!ers,” the “about us” page of its website specifies. “It is a belief in biocentrism, that life of the Earth comes first, and a practice of putting our beliefs into action.”

That said, the APD has identified general contact information and have reached out — though, Linn made clear Monday, investigators are not implicating the movement in any criminal activity.

“We have called them, yes. We did find a contact number on one of the fliers or the webpage or something like that,” Linn said while handing out space heaters from outside the department Monday night. “We called and talked to an individual and emailed multiple individuals. The whole point is we’re not accusing the organization of something because … the organization is made up of individuals. That’s not to say the individual or individuals responsible for this in some way affiliate themselves with this.”

But on Monday night, APD was more focused on the public service component of its role in the community. Black Hills Energy worked doggedly to arrange deliveries of what would total 4,000 space heaters to the Aspen area from multiple regional locales, and APD served as the primary delivery site. At about 5:30 p.m. Monday, APD released a statement instructing members of the public in need of a heater to come to the station.

But only roughly a half an hour later, during a community meeting that started at 6 p.m., Linn had an update that the initial delivery of 400 heaters had for all intents and purposes already been distributed.

“We are actually out right now. We’ve given away the initial 400 that came in on the truck,” he said, underscoring that shipments of an additional 3,600 were en route at the time. By about 7 p.m., that was indeed the case, and Linn joined his colleagues in distributing heaters to those in need.

Gabe Muething, a commander of the county’s Incident Management Team, highlighted that while resources are in place as well as plans to distribute them, the heaters are meant for those in need of them.

“We want to make sure that those who get the heaters actually do need them, so please take care of your neighbors in that respect,” he said Monday during the community meeting.

To that end, Pitkin County Human Services Deputy Director Lindsay Maisch said during the meeting that a phone number has been set up directly for those most at-risk during the outage — 970-379-1490 — but that her team had already been receiving calls to that number, intended for only those most vulnerable, by myriad people simply looking for a space heater.

“Just to be really clear: that [number] is if you are unable to meet your basic needs,” she said. “If you cannot get food; if you need shelter.”

Nan Sundeen, the county’s human services director, echoed Maisch’s message. Precautions have been takens and systems put in place — and she foresaw them being absolutely necessary if the outage continues for several nights — but so far, most of those with whom the department and its partner nonprofits have been in contact have expressed a want to remain home, so long as it’s safe to do so.

“We have a really, really hearty community. I think if we get through tonight, if it doesn’t last much longer, then we’ll be OK. If it lasts more than a couple of nights, we're probably going to need to be taking additional precautions,” she said.

For instance, both LIFT-UP and Aspen Family Connections have offered to arrange for food deliveries to those without gas heat, and therefore unable to cook, or in need of food delivery in general. Additionally, several companies in the lodging industry have offered options for those in need of shelter, she said.

“To date, we’ve heard there are 15 empty units that we could use if somebody needs it. So far, nobody’s asked for one. But it’s getting colder, we know,” Sundeen said, adding that the Red Cross also has offered its assistance, should the outage continue.

Vance Crocker, Black Hills Energy vice president of operations, didn’t anticipate Monday that it would be that long before the approximately 3,500 impacted customers had their gas service restored.

“It began with an act of vandalism, as we found out late Saturday night, early Sunday morning,” he said of the timeline of events. “As we were responding to that, we determined that to make it 100% safe for all of our customers, we essentially needed what we call shut in the system, repressurize it and purge it first. Those are some very critical steps that we need to take to ensure the safety of our customers.”

It’s a labor-intensive process — in order to ensure a safe relighting process. Crocker reiterated multiple times in several interviews that it should only be done by Black Hills Energy technicians, and said technicians will have to go residence-by-residence, not only turning on meters but also entering homes to verify there’s no presence of gas. One message was clear: Under no circumstances does any professional want the layperson attempting to relight appliances, although safely clearing access to the meter would be met with gratitude from all involved.

“We’re in the process of going to all 3,500 of those homes and actually shutting the gas off. We’re probably about halfway in that process,” he told the Daily Update Monday afternoon at about 4 p.m. “We anticipate the repressuring and purging should be complete sometime early this evening and we would start the relighting process tonight. Again, it’s a pretty labor-intensive process because we have to literally go to every home, turn the meter back on, go in and make sure it’s safe, then go in and relight the appliances.”

There were, of course, residents of facilities not traditionally thought of in such moments. Far from a home, AirBnb or VRBO, Pitkin County Jail inmates also were impacted by the outage, DiSalvo said. And, because of the mental-health considerations that go into so many of those circumstances, the fix wasn’t as simple as making sure a space heater occupied each cell — far from it.

“It’s an interesting perspective because it’s the last place anybody ever thinks of, but there’s human beings in there. What happened was, just like every other house, our jailhouse lost our gas,” DiSalvo said. “That’s our source of heat and hot water — we have neither.”

A sheriff’s deputy ventured to the Lowe’s in Glenwood Springs, only to find the inventory out-of-stock on space heaters. But after a lot of “scavenging” the area, DiSalvo said, enough heaters were located to heat the jail. Just not in individual cells.

“Clearly, there are safety and security issues when there are space heaters in the jail. Some other health concerns I can’t get into that worries us,” he said. But when asked directly about access to extension cords, in a clear nod to former inmate Jill White’s suicide just over a year ago, DiSalvo acknowledged honestly that it was the mainstay of concern. “[It’s an] appropriate question, given our history,” he said.

“We’ll do our best to heat our common areas,” he continued. “A lot of those people in jail have not been convicted.”