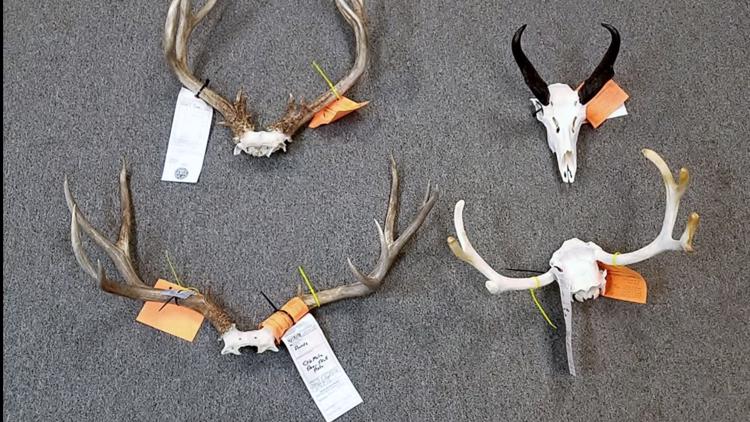 Florida men banned from hunting in Colorado after illegal kills

The Colorado hunting licenses of two Florida men were revoked after an anonymous tip led to them pleading guilty to illegally killing mule deer and pronghorns, according to Colorado Parks and Wildlife (CPW).

The suspensions of their hunting privileges came after their 2018 guilty pleas to participating in a poaching operation that claimed at least three mule deer and six pronghorn in Elbert and Lincoln counties.

A Colorado Parks and Wildlife Commission hearing examiner ruled on Feb. 11 that a 20-year suspension was warranted for Draper.

He was also sentenced to two years of supervised probation and forfeited all weapons and equipment used in his crime. He paid a $2,100 game penalty and a total of $4,213 in fines and court costs.

Deer antlers and a pronghorn skull and antlers confiscated in a poaching operation bust after an investigation by Colorado Parks and Wildlife officers.
CPW

Lawrence J. Cowart, 30, also of Bunnell, Fla. was issued a lifetime ban by the CPW Commission hearing examiner after he pleaded guilty on Oct. 5, 2018, in Lincoln County Court to willful destruction of wildlife, a class 5 felony.

“Mr. Cowart has a history of violating wildlife laws in his home state of Florida and in North Carolina. His most recent wildlife violations in Colorado are considered among the most serious of criminal activity against wildlife, where an animal is killed for its trophy parts and the meat is abandoned to waste," said CPW Commission hearing examiner Steven Cooley.

“Given his history and escalating criminal behavior, Mr. Cowart is viewed as a threat to Colorado’s wildlife. Although he expressed remorse during his suspension hearing, his repeated criminal actions against wildlife do not reflect this.”

Cowart was sentenced to three years probation, forfeited all his firearms and equipment used in his crime. He paid $2,440 in fines and court costs.

Cooley was equally unmoved by Draper’s claim that his involvement was minimal compared to Cowart. He noted Draper “expressed little remorse, or accountability, for his actions.”

“Timothy Draper has repeatedly demonstrated a deliberate lack of regard for Colorado’s wildlife,” Cooley said. “His actions are not viewed as hunting, but rather as outright poaching, done without any valid license, or outside established hunting seasons."

Both men also surrendered the trophy heads of the illegally harvested deer and pronghorn.

The suspensions end a poaching case triggered by a tip to CPW’s poaching hotline Operation Game Thief from a member of the public.

CPW amassed evidence the men killed deer and pronghorn – simply decapitating some and leaving their torsos – and shipped their heads to a taxidermist in Florida for mounting.

Deer antlers and a pronghorn skull and antlers confiscated in a poaching operation bust after an investigation by Colorado Parks and Wildlife officers.
CPW

Anyone who has information about a possible crime against wildlife is encouraged to call CPW or report it anonymously to Operation Game Thief. Witnesses can reach Operation Game Thief several ways including by calling, toll-free, 1-877-COLO-OGT (or 877-265-6648). Verizon cell phone users can dial #OGT. Or send an email to CPW at game.thief@state.co.us.

A Citizens Committee administers the reward fund, which is maintained by private contributions. The board may approve rewards of up to $1,000 for flagrant cases. Rewards are paid for information that leads to an arrest or a citation being issued. To learn more about Operation Game Thief, visit the CPW website.