Gideon Long served seven years in juvenile detention and was released in 2018. He pleaded guilty to killing his parents and attacking his siblings when he was 12. 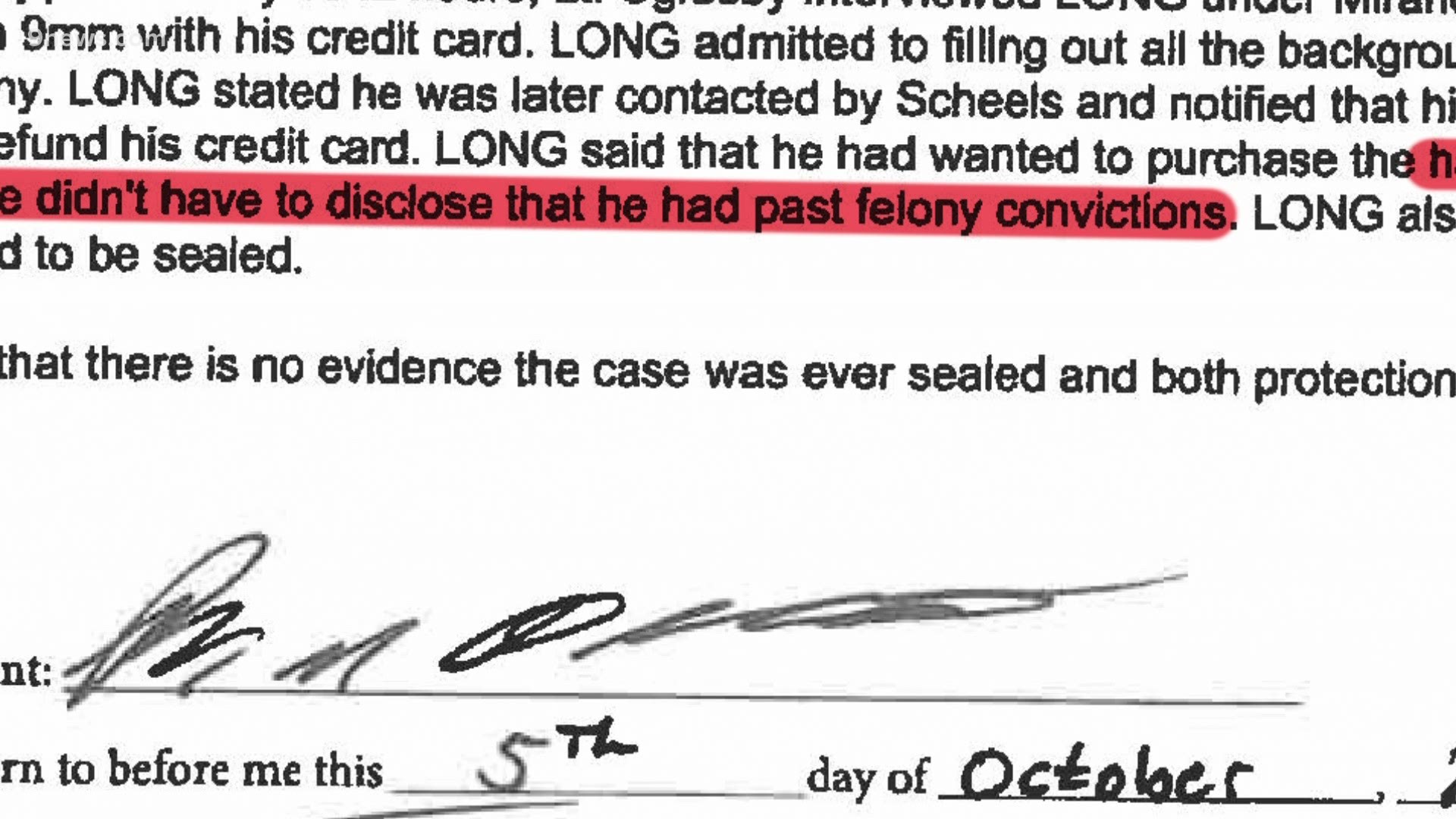 LARIMER COUNTY, Colo. — A man from eastern Colorado who pleaded guilty to killing his parents when he was 12 is in trouble with the law again.

Gideon Long, now 22, served seven years in juvenile detention before being released in 2018. He's accused of attempting to buy a gun in Larimer County in September 2020.

On March 1, 2011, Long shot and killed his parents, Charles and Marilyn Long, at their home in the small Eastern Plains town of Burlington. He also shot and stabbed his 9-year-old brother and slit his 5-year-old sister's throat.

Police never established a motive for the attack and Gideon Long never offered one, but six months later he pleaded guilty and was sentenced to seven years in juvenile detention.

Two years after his release, on September 20, 2020, police said Long tried to buy a nine mm handgun from Scheels All Sports in Johnstown.

According to the arrest warrant, Long lied on his background check paperwork by checking the box that said he had never been convicted of a felony. Colorado law prohibits convicted felons from buying guns.

AFFIDAVIT: Read the full arrest affidavit in the 2020 case

"It just bothers me that someone who was convicted of murder with a firearm is trying to buy more guns," said Wally Long, Gideon Long's uncle. "I would be concerned if he were living next door to me, that’s for sure."

Wally Long said he’s had no contact with his nephew Gideon since shortly after he was arrested in 2011. A retired federal corrections officer, Wally Long now lives in Missouri with Gideon’s brother and sister who survived the attack. He legally adopted them in 2011.

That is not, however, how he describes his nephew, who he claimed has been spreading a pattern of lies since he was released from custody three years ago.

Wally Long said this includes his nephew's recent attempt to join the Army.

"He enlisted in the Army back in March of 2020... was in boot camp before his background check came back that he was a convicted felon and, of course, they discharged him and kicked him out," Wally Long said.

9Wants to Know has confirmed with the Army that Gideon Long was discharged last September before completing basic training. They would not say exactly why, but they did confirm that soldiers who lie on their applications are either discharged or court-martialed.

In addition, 9Wants to Know has learned that before Long tried joining the Army, he was certified in Colorado as an emergency medical technician. The Colorado Department of Public Health and Environment (CDPHE) said Long “stated that he had never been convicted of a felony.” His certification has been suspended.

"The pattern of his life is falsehood and lying, trying to get what he wants," Wally Long said.

Gideon Long's latest alleged falsehood could land him back behind bars. When he was arrested last year, he told investigators he was buying the gun for a “friend as a gift” and “thought his record had been sealed and that he didn’t have to disclose that he had past felony convictions.”

Police say there is no evidence the case was ever sealed.

9NEWS Legal Analyst Whitney Traylor said even if Long believed his case was sealed, he was still required to disclose his felony conviction.

"He literally checked off the box saying ‘I don’t have any felony convictions,' there weren’t any qualifiers, so he clearly violated the basic language of that application," Traylor said.

Wally Long said, in his heart, he has forgiven Gideon for the murders, but is still haunted and deeply confused by what happened.

"I have gone over it and over it in my mind from every angle, and I can’t figure out anything, nothing makes sense," Wally Long said.

According to court records, Gideon Long is now out on bond and living in Loveland. Wally Long said he is hoping his nephew is convicted of the gun charge he’s now facing and that he won’t be a free man much longer.

"I’m kind of hoping that the prosecutor in this case will throw the book at him," Wally Long said. "The charges he has against him could land him back in prison and I would honestly like to see that."

Long is slated to appear in court again on May 27. His lawyer declined to comment for this story.