Officer Nicholas Hanning didn't identify himself as police when he knocked on the door of Michael Clark, 75, according to the affidavit. 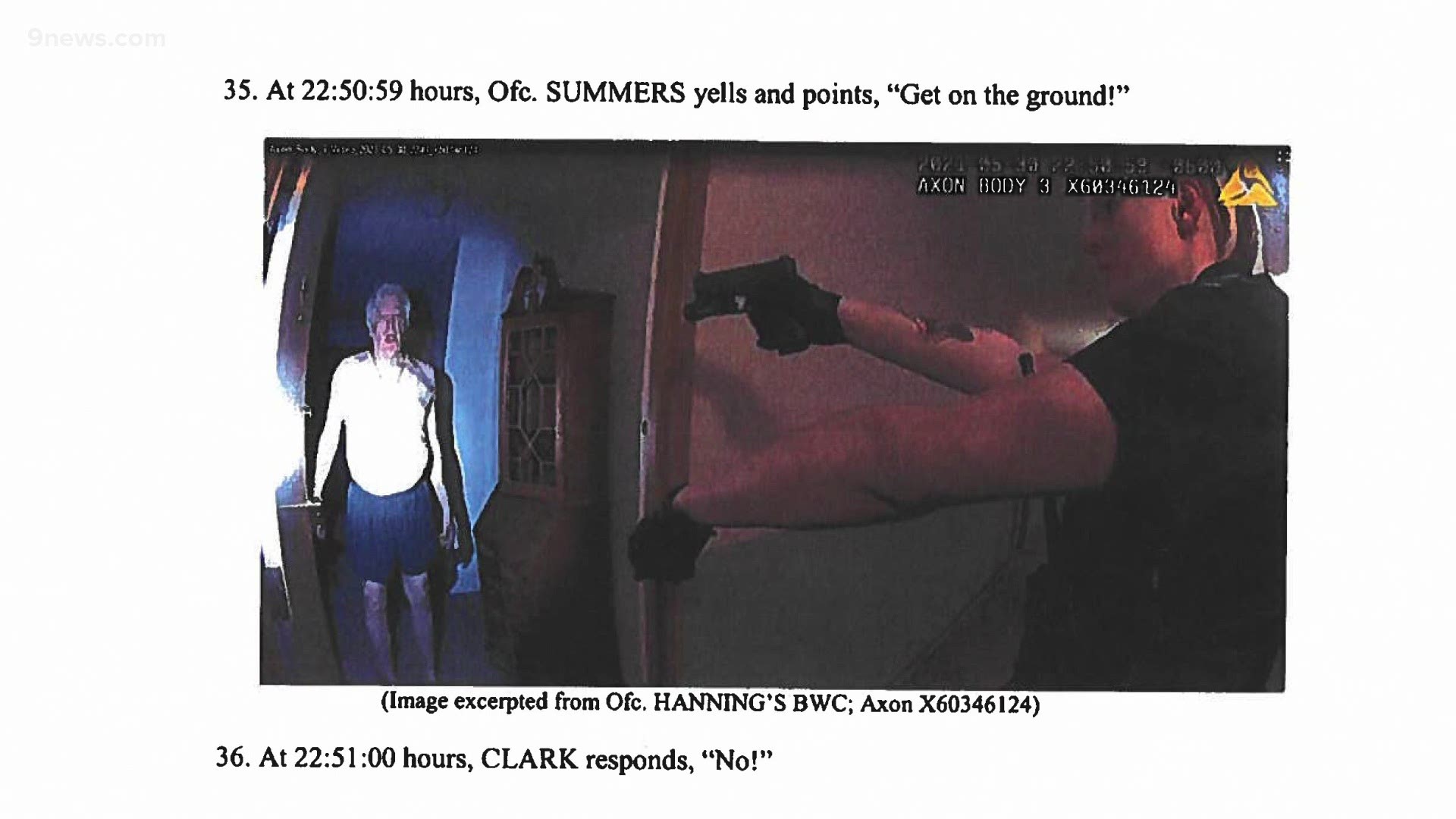 CLEAR CREEK COUNTY, Colo. — An Idaho Springs officer charged with third-degree assault on a 75-year-old man did not identify himself as police when he knocked on the man's door and deployed his Taser 19 seconds after the man set down his weapon, according to the affidavit in the case, which was made public on Tuesday.

His charges stemmed from an incident that happened May 30. According to the affidavit, Hanning and another officer, Ellie Summers, were responding to a call from a woman who said her neighbor in her apartment building had hit her in the face.

The affidavit includes a timeline of events and still shots from body camera footage, which has not been publicly released. A judge on Tuesday ruled that the District Attorney's Office must release the body cam footage by July 29.

According to the timeline in the affidavit, Hanning knocked on the door of the neighbor, Michael Clark, twice without identifying himself as police.

Clark opened the door about 20 seconds later and yelled, "What do you want?"

Clark was holding a 2-foot-long sword with teeth along the edges. Hanning yelled a profanity, began to enter Clark's apartment and kicked the back of Clark's knee, according to the affidavit.

Three seconds later, Hanning and Summers ordered Clark to drop the sword, and Clark reached up with the sword in hand and placed it on top of a shelf, the affidavit says.

Clark then turned to face the officers while standing inside his apartment doorway, with the officers outside the apartment. Both officers told Clark to "get down" and "get out here" several times over the next nine seconds. Summers had her firearm drawn and pointed at Clark, according to the affidavit.

Clark then responded, "No!" and tried to explain to the officers that his neighbors had "hit that wall so hard ... I thought they were going to come through the wall."

One second later, "without commands or warning, Ofc. Hanning fires his Taser, which strikes Clark in the abdomen and pelvic area," the affidavit states.

Clark fell straight back, unconscious, struck a dining room chair and landed on the floor. Sixteen seconds later, Hanning was seen on the body cam footage pulling Clark's right arm and appearing to pull the right side of Clark's face into a shelving unit, according to the affidavit.

After paramedics arrived, Clark denied hitting his neighbor and said he was asleep at the time. He was taken to a hospital, according to the affidavit. Clark later told authorities that he was in bed when there was a hit on his wall, and then the police came to his door.

He said he didn't know it was police at his door when he opened it. When he was asked why he didn't comply with commands to get on the ground he said, "Because I had no reason to ... there was no reason to assault me," according to the affidavit.

Credit: Idaho Springs Police Department
A still shot from body camera footage shows the sword that Michael Clark was holding when he opened his door on May 30, 2021.

A July 8 news release from the 5th Judicial District Attorney's Office says that after Clark opened his door with the sword that "a physical altercation between Officer Hanning and the male ensued. After multiple commands were given by both officers, Officer Hanning deployed his Taser. The male was injured as a result, and was ultimately taken to St. Anthony's hospital for medical care."

Clark's attorney, Sarah Schielke, said in a news release on Monday that Clark has been hospitalized since the incident with heart complications and a stroke. Schielke disputed information released by police and the district attorney.

"They pat themselves on the backs for charging Officer Hanning with a single low-level felony while simultaneously, in the very same releases, painting Michael -- the victim of Hanning's crime -- as some sort of crazed individual wielding a sword who deserved it," Schielke said in the release.

RELATED: 22-year-old felon gets 48 years in prison for shooting at Douglas County deputies