"At the time I had just lost a really good job," said Michael Kocher, a former Marine reservist who now lives in Denver 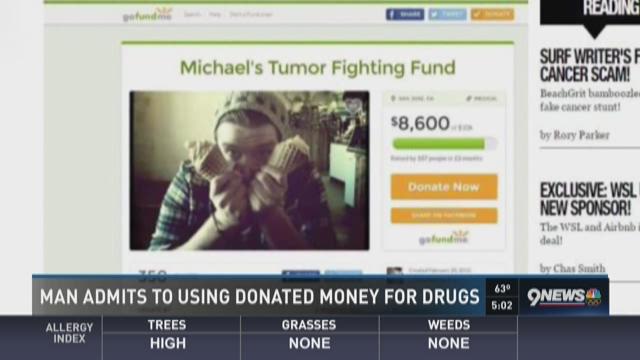 DENVER - "At the time I had just lost a really good job," said Michael Kocher, a former Marine reservist who now lives in Denver.

Kocher said about a year ago he fell on hard times, just when he learned his health may be failing.

"They originally diagnosed me with having tumors on my spine/spinal cord," Kocher said.

With no income to pay for medical bills, Kocher started a GoFundMe page. A friend of a friend, Kirna Armitage wanted to help.

"He was an ex-marine dying of cancer," Armitage said.

"I thought that he was honest and truthful," she said.

"Like three weeks later the lab results come back, I guess, and the doctor calls me and is like 'Hey we’ve got really good news,'" he said.

Kocher said he learned he didn't have cancer. The problem: He also didn't have the donations.

"I had already spent such a huge percentage of it I didn't really know what to do," he said. "I didn’t know how to be like 'Hey, so guess what guys? Not sick! But the bad news is I spent most of your money on heroin.'"

He didn't stop and collected money for months.

"Most of it got spent on drugs and living expenses," Kocher said.

Kocher is now in Denver's jail. He's on no bond for failing to show up for court. He says it is all the product of a drug addiction.

"I wish I had never done what I did," Kocher said. "There’s such a huge amount of, like, guilt, and, like, shame, like running through me right now."

To Armitage, Kocher's words have lost their meaning.

"I felt heartbroken," She said. "I was sad, I was in shock. I just couldn’t believe someone would fake cancer."
Because Kocher doesnt have access to medical records in jail, 9NEWS can't verify what doctors actually told him.

GofFundMe said they are reimbursing his donors.

Unfortunately, Armitage wont' get her money back because she gave it to him in person.

"Despite what this looks like and despite how this makes my character look, I really do care about people," Kocher said.