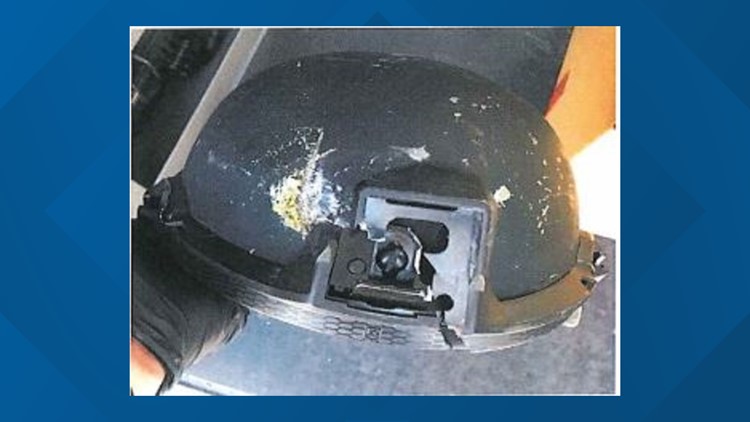 Photo by: 8th Judicial District Attorney's Office
The helmet of Officer Ashe who was struck in the head by a bullet.

LOVELAND, Colo — Officers involved in a shootout in Loveland last month that resulted in the death of a woman suspected of killing her husband won't face charges, according to a decision letter from the 8th Judicial District Attorney's Office.

Tammy Pierce, 59, died of multiple gunshot wounds after a confrontation with officers at a home in the 3300 block of Cuchara Court last month. The DA also said that if Pierce had survived, there was enough evidence to charge her with the murder of her husband, Samuel Harding.

Officers with the Loveland Police Department went to the home around 7 p.m. on Nov. 11 to conduct a welfare check on Harding, the decision letter says. Harding's mother called the police that day and said that during a conversation her daughter-in-law, identified as Pierce, indicated that she had killed her husband. Harding's mother also advised police there were guns and a dog inside the home.

The officers could not initially make contact with anyone at the home, and walked around the exterior knocking on doors and windows in an attempt to get a response, the letter says.

One officer said he located an unlocked door to the garage and looked inside. He saw a man lying on the floor who appeared to have been shot multiple times, the letter says. The officer determined the man was dead and "had been deceased for a period of time," the letter says.

After the discovery was made, the Loveland SWAT team was called to make a forced entry into the home, if necessary, to locate a potentially armed suspect or additional victims, the letter says.

SWAT officers arrived at the home just before 9 p.m. In an interview, Officer Paul Ashe explained that it was his role to enter the home first. He told investigators that he "knocked three times very loudly" and announced "Loveland Police Department! Come to the front door!"

After getting no response to three announcements, SWAT officers forcibly entered the home, the letter says.

While in the doorway of the home, Ashe said he saw a bulldog and heard what he believed to be a woman moaning, according to the letter. He could not see the woman, the letter says, but heard her say "I am already dead."

Ashe said at first the woman remained out of his view and he could see a black revolver on the floor, according to the letter.

He said he saw the woman "crawl on all fours toward the revolver" and gave orders to the woman to show her hands, but she refused. Another officer then deployed a K9 officer in an attempt to prevent the woman from reaching the weapon, but the K9 did not engage the suspect, according to the letter.

As Ashe attempted to disengage the safety on his rifle, he said he saw the woman "point the revolver at him" and saw a "muzzle flash", the letter says. He then felt a bullet strike him in the head, according to the letter.

The helmet of Officer Ashe who was struck in the head by a bullet.
8th Judicial District Attorney's Office

If he had not been wearing a ballistic helmet, he would have been killed or seriously injured, the letter says.

Despite being shot, Ashe pulled out his handgun and returned fire, according to the letter.

Another responding officer said prior to the shooting, he heard Ashe "pleading" with the woman, saying, "don't grab that gun! Please don't get that gun!" That same officer then said he heard one gunshot, following by a second shot and then saw Ashe "buckle," the letter says.

The bullet that struck Ashe was fired from the same weapon that was used to kill Harding, the letter says.

Based on the evidence and several messages Pierce left for family members, investigators determined she killed Harding sometime between Nov. 6 and 8 and had she survived she would have been charged with multiple felonies including first-degree murder, numerous counts of attempted murder and felony menacing.