The Weld County Sheriff's Office said a woman reported being pulled over by the impersonator early Friday morning on I-25 near Erie Parkway. 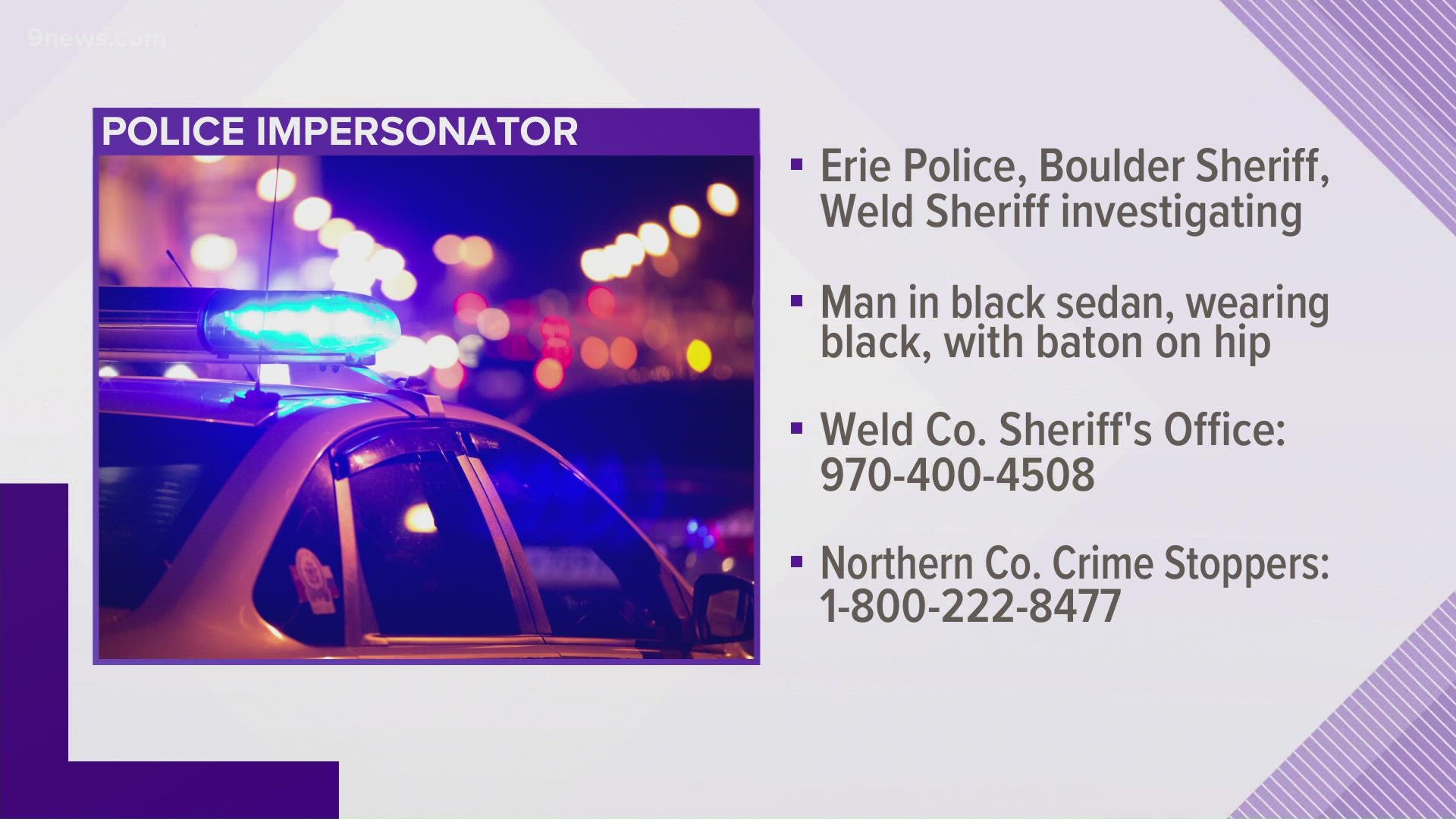 WELD COUNTY, Colo. — Deputies in Boulder and Weld counties are investigating instances of a police impersonator who has been pulling over women drivers near the town of Erie.

The Weld County Sheriff's Office (WCSO) said they were called by a woman who had been pulled over on northbound Interstate 25 near Erie Parkway. The woman told deputies she was pulled over by a man driving a black sedan that had blue and red lights mounted either inside or near the top windshield or on the roof of the car.

Deputies said the impersonator is described as being a clean-shaven white man with an average build. He's about six-feet tall with average-length brown hair, deputies added.

The woman said the suspect asked her why she thought she had been pulled over and then asked for her driver's license and vehicle registration, WCSO said.

The woman saw that the suspect wasn't wearing a badge and asked why he didn't have it, deputies said. The suspect told the woman his badge was in his car and invited her to get out of her vehicle to come to his car to see his badge, WCSO said.

The woman then told the suspect she was calling 911 to get his badge number, WCSO said. After hearing this, the suspect went back in his car and drove off, WCSO said.

Weld deputies said this call closely matches two other police impersonator incidents that happened in the town of Erie on July 26 and 27.

The Boulder County Sheriff's Office is also investigating a similar incident that occurred within the last week.

Deputies said people can call 911 if they think they're being pulled over by a suspicious vehicle to confirm it is a legitimate law enforcement officer. WCSO said people should put on their hazard lights to acknowledge the stop and pull over in a well-lit area, and ask dispatchers to stay on the line for initial contact. People are asked to get a good description of the person and the vehicle along with its license plate.

Anyone with information on the impersonator case is asked to call Deputy Chris Dalzell with WCSO at 970-400-4508. Tips can also be called in to Northern Colorado Crime Stoppers at 1-800-222-8477 or submitted here.