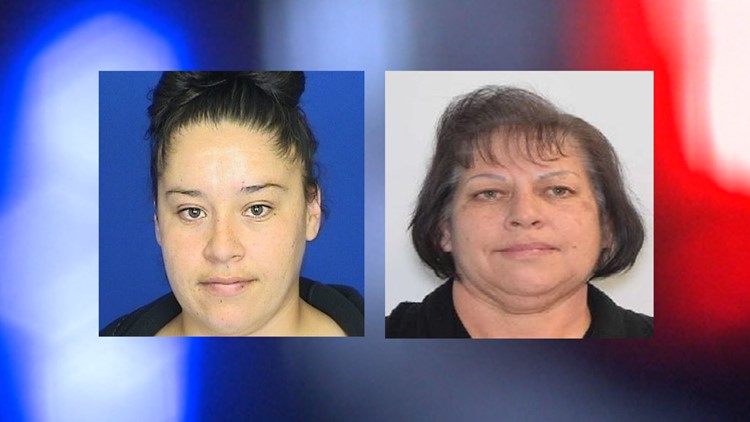 SHERIDAN, Colorado — A mother and her daughter were arrested and face charges in connection with the kidnapping and assault of Sheridan woman who was found walking in the median on U.S. 285 near C-470 Monday morning, according to the Sheridan Police Department.

In an affidavit, Jefferson County Sheriff's Office said 26-year-old Rudi Duran was located walking along the center median in the area of Highway E-470 and South Wadsworth Blvd.

Several calls were made regarding Duran appearing distressed and being left on the side of the highway, according to the affidavit. One driver described the vehicle that Duran exited as a black Nissan.

Duran told authorities she was kidnapped at the McDonald's located at Hampden Avenue and Federal Boulevard. Duran was then transported to Jefferson County Sheriff's Office where authorities noticed fresh, visible scratches along her jawline and nose, the affidavit said. She also had bruises along her left thigh, which she said came from being assaulted in the vehicle.

According to police, the dispute began involving a "food stamps" card. Duran said she had agreed to meet her ex-girlfriend, Brennon Kaufman, at 10 a.m. at the previously stated McDonald's. Duran stated Kaufman was supposed to sell "Laura and Laura's mom" a food stamps card in exchange for cash, the affidavit said.

As she walked up to the McDonalds, Kaufman was already walking back toward her. Duran said she did not witness the food stamps card transaction but stated "Laura and Laura's mom" began following her with a black-colored, four-doored Nissan SUV, the affidavit said.

Duran said Kaufman began to jog away from the area and fell out of sight after she entered Wildcat Park directly south and across the street from the McDonald's restaurant. Duran walked away and was soon approached by Laura and Laura's mom on foot, who began to verbally threaten her, police said.

The two women asked Duran about the whereabouts of Kaufman. When Duran was unable to provide her location due to Kaufman's homelessness status, the two women told her she had to leave with them, the affidavit said.

According to the affidavit, the two women threatened to hurt Duran's family and kill her by taking her somewhere in Colorado Springs. Duran walked back to the Nissan where Laura physically grabbed her left arm and escorted her into the vehicle.

Duran told authorities that she initially refused to leave with the two women but changed her mind once they threatened her family.

The two women drove around the area insisting on Kaufman's whereabouts. After they left the area of the McDonalds, they drove to a 7-Eleven located near Hampden and Federal, where Laura exited the vehicle. Laura's mom physically held Duran in place and twisted her shirt so tight around her abdominal area, restricting her breathing, the affidavit said.

Duran said Laura's mom also used her torn shirt to twist it around Duran's neck and attempted to strangle her, according to the affidavit.

When they left the 7-Eleven, both women forced Duran to call her father to demand $200 in exchange for her freedom, the affidavit said. Duran said Laura took her phone from her and told her father something to the effect of, "You're never seeing your daughter again" before throwing her phone out the driver's window and onto the center median area of US 285.

The affidavit also said the two women drove Duran around several areas and repeatedly hit her in the face and took valuables she had including rings, earrings, a Key Bank debit card, two Walmart gift cards, and her Colorado ID card.

Duran told authorities she did swing at the two women but was unsure if she hit either of them. She added she had never met the two women prior to the incident.

Douglas County Sheriff deputies were informed of the incident and the two women, 30-year-old Laura Plazola and 57-year-old Justina Plazola, were contacted at 10641 US Highway 85.

Authorities said the two women matched the descriptions stated by Duran. DCSO added Laura Plazola was making spontaneous utterances about sustaining scratches in an altercation and a dispute over a food stamps card.

Both Laura and Justina Plazola were arrested and transported to the Arapahoe County Jail for the following charges:

The whereabouts of Brannon Kaufman remain unknown and law enforcement has not located her, the affidavit said.