The fire set late Saturday was quickly extinguished, according to authorities. 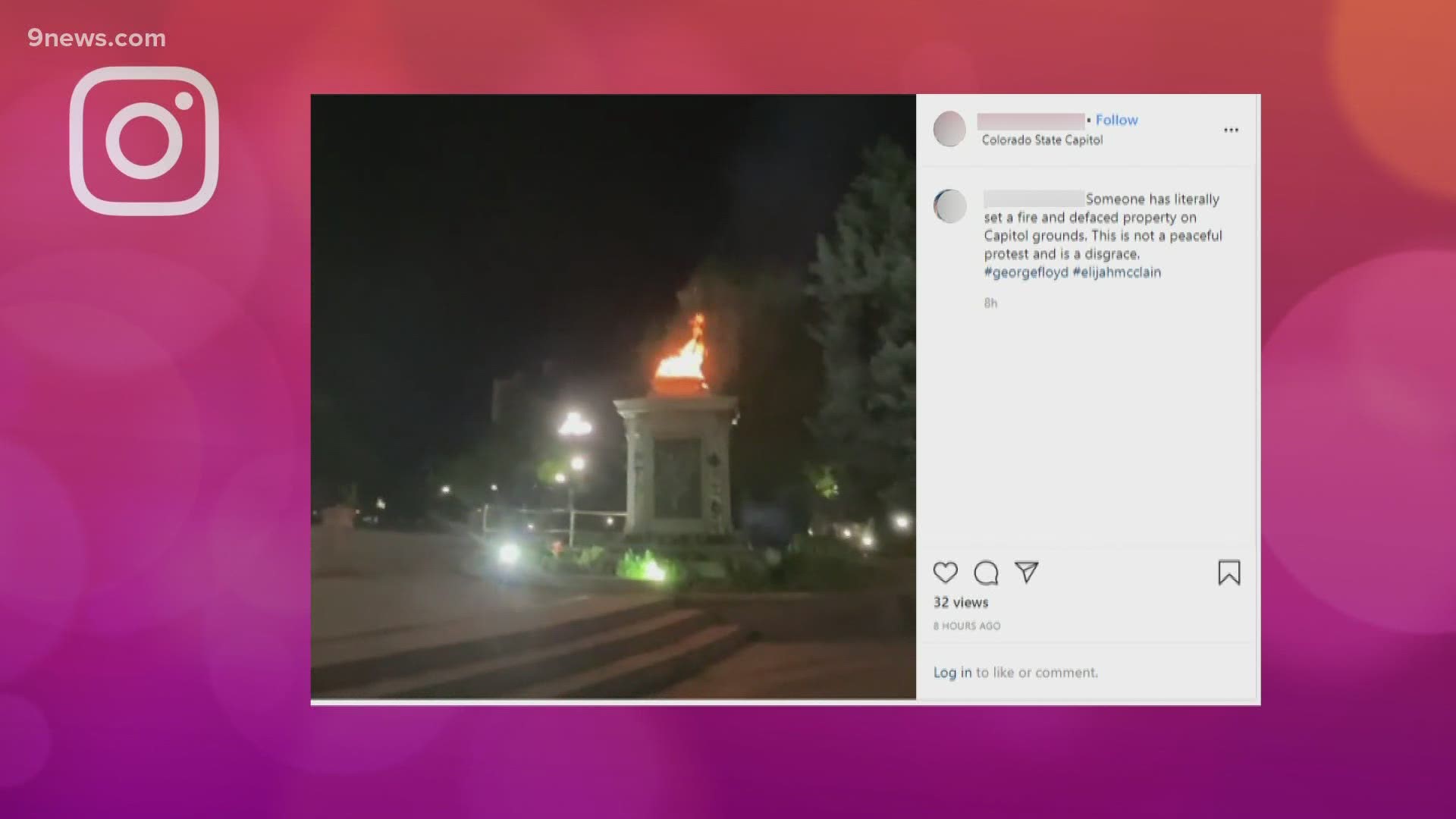 DENVER — Protesters outside the Colorado state Capitol set fire late Saturday to the pedestal of a Civil War statue that was toppled and removed last week, according to authorities.

About 75 protesters were demonstrating peacefully around the Capitol when a small group broke off and went to the pedestal where a Civil War statue was toppled on Thursday, according to a Colorado State Patrol (CSP) spokesperson.

About 10:55 p.m., a fire was set atop the pedestal. The Denver Fire Department (DFD) responded and extinguished the fire within about 20 minutes, the CSP spokesperson said.

A spokesperson for Denver Fire said the fire was set using wood and other combustibles and that firefighters extinguished the blaze with little damage done to the pedestal, which is made mostly of concrete.

“Good news: Three suspects have been apprehended and we hope this also provides a breakthrough into other ongoing investigations regarding destruction of public property," Polis said in his statement. "There is a right way and a wrong way to have an open and honest conversation about our history. Destruction and vandalism are not the answer. To be clear, no matter what your feelings about public art, our state respects the rule of law and there are proper legal channels for reflection, conversation, and change.”

DFD arson investigators were looking into the incident, the Denver Fire spokesperson said.

The Denver Police Department (DPD) identified one suspect as Trayvelle Walker, 22, who was being held on suspicion of second-degree arson. Trayvelle was scheduled for his first court appearance Sunday morning.

Located in the west portico outside the Capitol, the statue that was toppled last week depicts a Civil War cavalryman, dismounted with a rifle in hand. It honors the Colorado soldiers who fought and died in the Civil War, according to the state's website.

It was designed by Captain Jack Howland, a member of the First Calvary and was paid for from funds by the Pioneers' Association and the state of Colorado. It was erected on July 24, 1909.

DPD was handling the investigation into the vandalism to the statue, a CSP spokesperson said last week.

Polis released a statement after the incident saying he was outraged by the damage to the statue and that it would be repaired.

The governor also noted that the statue was originally put up to recognize Colorado soldiers who fought in all battles and characterized Sand Creek as a battle. There's now a plaque at the monument that addresses Sand Creek and says:

By Designating Sand Creek a battle, the monument's designers mischaracterized the actual events. Protests led by some Sand Creek descendants and others throughout the twentieth century have led to the widespread recognition of the tragedy as the Sand Creek Massacre.

Another statue was targeted later Thursday: The Christopher Columbus statue in Civic Center was pulled down from its pedestal late Thursday night, DPD said.

On Friday, the City of Denver removed a statue of Kit Carson in front of a building on Colfax Avenue after the city heard that it might become another target, said Scott Gilmore, deputy manager for Denver Parks & Recreation.

Also on Saturday night, DPD investigated a suspicious package, a suitcase, that was left on the Capitol steps, the CSP spokesperson said. The suitcase was determined to not be hazardous, according to a DPD tweet.