"The way that our laws are written in Colorado and in Wyoming, there was nothing more anybody else could have done to try and get this adult man into treatment and avoid hurting himself or somebody else." 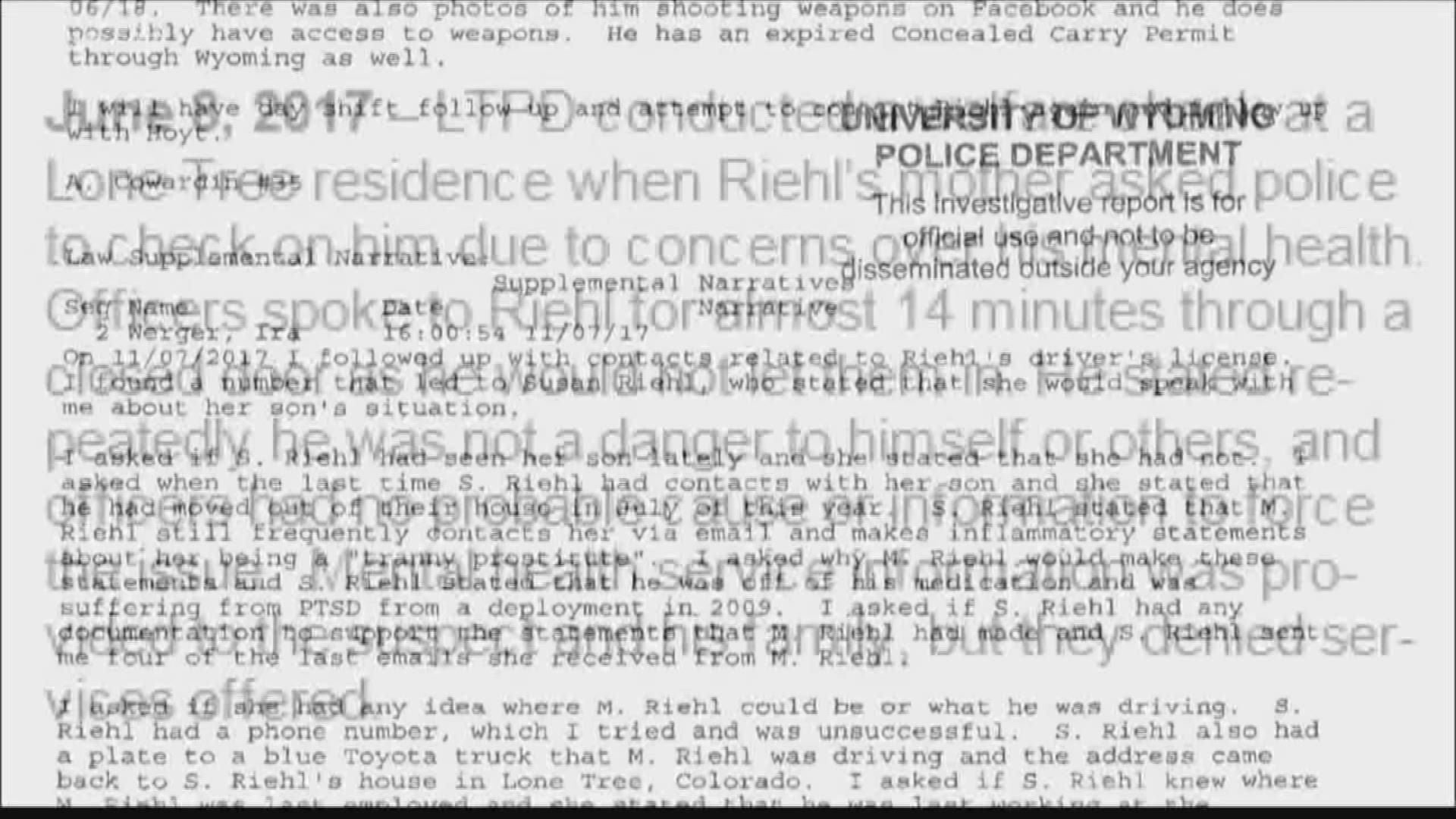 9NEWS shared those documents with forensic psychologist Dr. Max Wachtel, who helps 9NEWS understand issues of mental health. He said police documented a history of efforts to get Riehl help.

“Everybody was trying to do the same exact thing to get him the help he needed, and this time he was refusing,” Wachtel said. “They were worried about this guy.”

Last November, his friends told police in Wyoming, Riehl went off his meds after suffering a history of mental breaks. They told police he was texting gibberish and wasn't following their advice to get treatment. One friend blocked Riehl's number because incoherent texts were coming in every 30 to 60 seconds, the police reports said.

“It seemed like family members, friends, loved ones, law enforcement, everybody was concerned about this guy, they all thought that he had some sort of a mental illness, a lot of different diagnosis were mentioned, medication was mentioned, there have been hospitalizations in the past,” Wachtel said.

But Wachtel said there wasn't much anyone could do.

“The way that our laws are written in Colorado and in Wyoming, there was nothing more anybody else could have done to try and get this adult man into treatment and avoid hurting himself or somebody else,” Wachtel said.

Wachtel said the evidence just wasn't there for law enforcement to take the next step and commit Riehl against his will.

“He didn't break any laws ahead of time,” Wachtel said. “Do we want to take away all of his rights, lock him into the hospitals, essentially it's like he's being arrested, but not charged with anything? We have the Constitution, we have the Bill of Rights, we don't want to throw that away. We have to balance that with keeping the public safe and those two things don't always mesh.”

Providers like Wachtel advise people to turn to the Colorado Crisis Services hotline at 1-844-493-8255.

The hotline connects a person suffering from a mental health crisis to a trained counselor over the phone. The deputy director of the Colorado Behavioral Healthcare Council, Brian Turner, says the hotline can also provide access to much more.

“I think it is really important to know that it is more than just a statewide hotline, but there is also mobile crisis response,” Turner said. “What you can do – by connecting with the crisis system, they may be able to dispatch a mobile crisis response team. These can go to an individual's home.”

During the last fiscal year, the crisis hotline received more than 112,000 calls and 45,756 people were served by either the walk-in centers and the respite and mobile crisis response, according to data from the Colorado Behavioral Healthcare Council. As many as 40 percent of those who received services from walk-in clinics or the mobile crisis response teams presented as suicidal.

“I am not pretending like what we have done is enough,” said Mental Health Colorado president and CEO Andrew Romanoff. “The crisis service center is an improvement, we are moving in the right direction, but my view is not fast enough.”

Mental health providers can still be difficult to find for those who are seeking out treatment, and there are strict limits on forcing someone you believe may be in a mental health crisis to get help.

However, experts say the resources we do have need continued support and more awareness.

“You've got some folks who are going to wince at the price tag but treating mental illness is much more cost effective and more humane than ignoring it or criminalizing it,” Romanoff said.

“It's incumbent upon us to continue to build on that investment,” Turner said of the crisis services. “These are services that are available and we are continuously enhancing them around the state.”

Other resources also exist for those who are not currently experiencing a crisis, but want to know how to recognize the signs and symptoms when someone might need help. Anyone may sign up for a Mental Health First Aid class can learn about what to do in emergencies and where to go for help.

“We have to keep in mind the vast majority of people who have mental illness are not in danger of hurting themselves or anyone else, usually when they do get to that level of dangerousness, they are directing it toward themselves,” Wachtel said.