The "What Would Cheesus Do?" food truck was stolen late Sunday night in Adams County, but was found Tuesday morning. 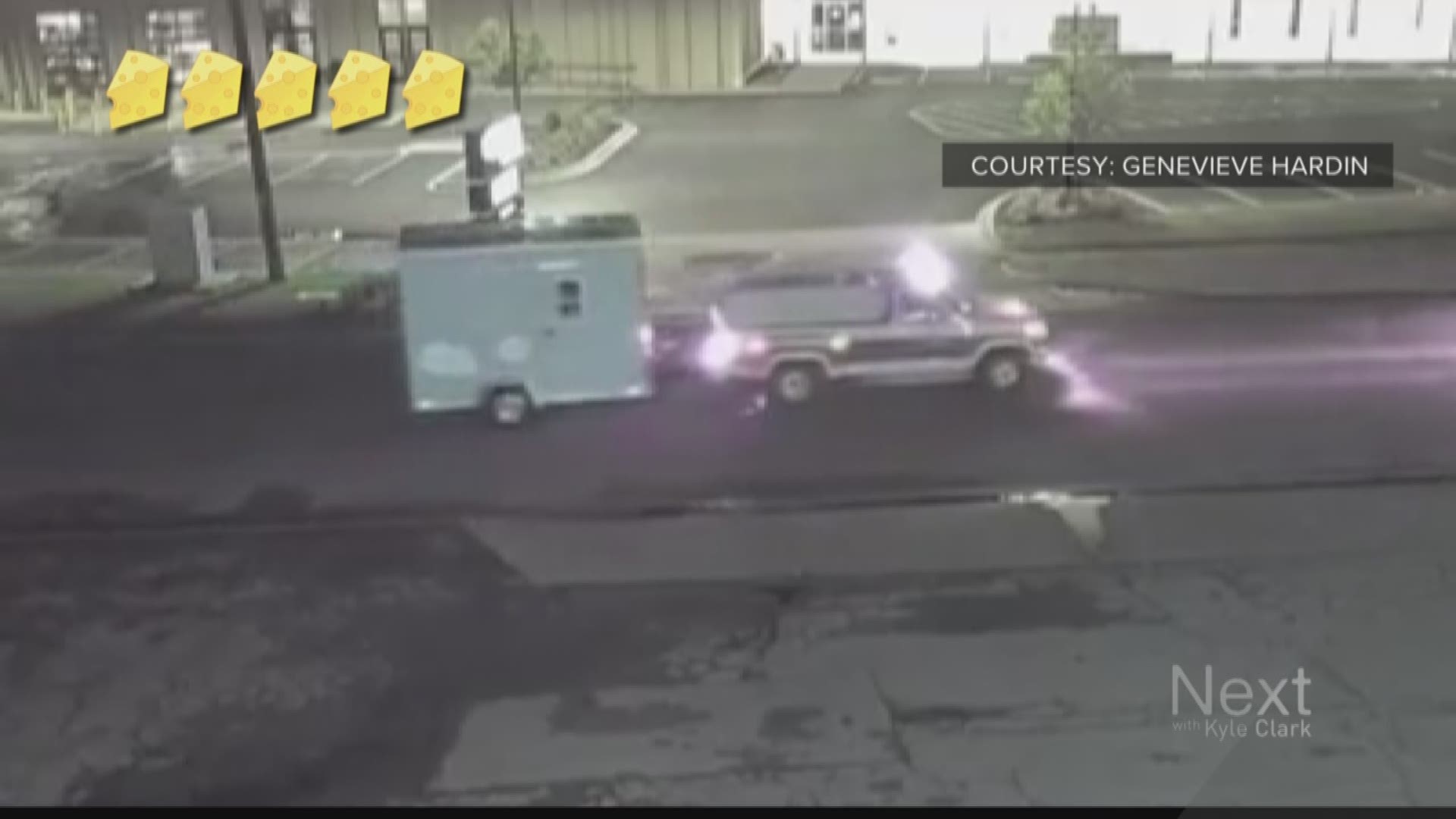 KUSA — Genevieve Hardin says they took everything … even the menus. But at least she found Cheesus.

After she put out a plea on social media, her food truck – called “What Would Cheesus Do?” – was found Tuesday morning in an industrial area in Commerce City. It was completely gutted, but the shell’s still there.

The distinct green trailer was stolen at around 11:30 p.m. Sunday in the area where it’s typically stored near Interstate 25 and West 58th Avenue. A surveillance video posted to the Cheesus Facebook page shows a pickup taking the food truck away and into the night.

Hardin, who bought the truck from a previous owner in February, found out it was gone Monday morning.

“I was about to head into my Denver health inspection an hour later,” she said. “I’ve poured my heart and soul, all of my savings and everything into this.”

Cheesus is Hardin’s full-time job. She struck out on her own after a dozen years in the restaurant business, and brought in seven full-time employees to help out.

She had an event at an elementary school slated for Wednesday that included dozens of pre-ordered grilled cheese sandwiches, but that’s not going to happen now.

“They stole all my coolers, my grills, my generator,” Hardin said. “They stole thousands and thousands of dollars worth of equipment.”

This happened just a few weeks after the food truck was the subject of a YouTube video that took issue with its name was posted by a channel with more than 44,000 subscribers.

The channel’s creator fervently denied having any role in the truck being stolen in a follow-up video.

Sgt. Jim Morgen, a spokesperson for the Adams County Sheriff’s Office, says the YouTube video likely had nothing to do with the theft, though investigators will be looking at all angles as usual and trying to see if the culprit left behind fingerprints or DNA.

He said that in cases like this, the thieves are typically looking to steal expensive equipment – including generators, which could fetch hundreds of dollars on the black market.

The location and time of night in which the truck was stolen back up this theory, Morgen said.

Hardin says the truck was insured, and she’s working on rebuilding. Luckily, she has lots of people in her corner.

“There’s so many supporters and everybody’s really wanting to help as they can,” she said.

Maybe this is a part of the article where we mention one of the 10 Commandments: “Thou shalt not steal.”

“It was devastating, I’m just still in shock,” Hardin said. “To be just taken under my nose after putting all my money into it …”

For updates on “What Would Cheesus Do?” head to the Facebook page: https://bit.ly/2kf8dRu

The good news in all of this? Cheesus will be resurrected.