Jonathon Armijo was previously arrested and accused of setting booby traps that were rigged to kill animals, an affidavit says. 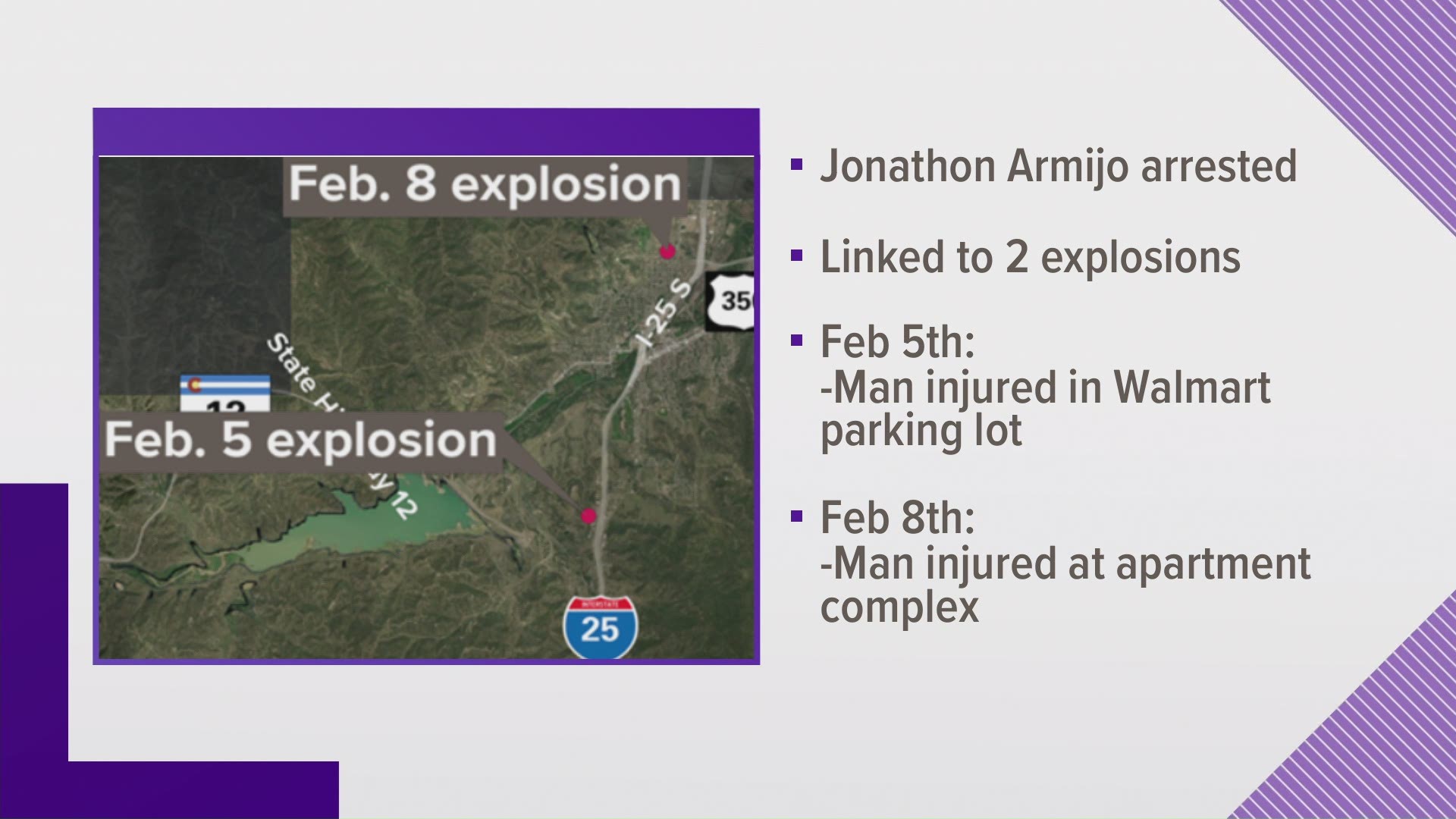 LAS ANIMAS COUNTY, Colo. — The man arrested and accused of planting a package that exploded when another man picked it up was previously arrested in connection with booby traps that were rigged to kill or injure animals, an arrest affidavit from the Trinidad Police Department (TPD) says.

Diego Hurtado, 22, was severely injured when he picked up the package in a parking lot in the 300 block of East North Avenue around 1 a.m. on Feb. 8, according to police.

Jonathon Ryan Armijo was taken into custody in connection with that incident and another incident that happened on Feb. 5 in a different Walmart parking lot. He's being held in the Las Animas County Jail on the following charges:

Officers who responded to the Feb. 8 incident said they made contact with the victim and another man who was with Hurtado. That man told officers that they were walking through a parking lot and spotted a package, which was described in the arrest affidavit as a wooden box.

The box had a note attached which, according to the affidavit, read, "Sissy Mom + Dad's rings! DO NOT LOSE! See you at the wedding!"

The witness said Hurtado picked up the package and walked with it and then opened it near the apartment complex office. When he opened it there was an explosion, according to TPD. Hurtado suffered severe injuries which included the loss of most of the fingers on his left hand. He also has a severe facial injury and a puncture wound to his chest, the affidavit says.

Investigators interviewed witnesses and one of them said they saw Armijo leaving an apartment at 309 East North Ave. around 2 a.m. That apartment is directly across from where the box was picked up by Hurtado, the affidavit says.

Officers asked Armijo if he had seen anything, and he responded that he had been called over by his girlfriend after the explosion, the affidavit says. However, when they questioned his girlfriend, she said Armijo was there prior to the detonation. The officer had stopped Armijo as he was taking trash to a dumpster, and those items were later collected as potential evidence, the affidavit says.

Blue latex gloves and medical gauze were among the items found in Armijo's trash, according to the affidavit. Packaging for "mini clear containers" and a receipt with Armijo's name on it was also found, the affidavit says.

They later determined that Armijo and his girlfriend purchased one, 15-count package of CO2 cartridges, and at least four wooden containers from Walmart, based on the receipt and security video from the store. Those items were the same or similar to components found at the scene related to the explosive device, the affidavit says.

On Feb. 5, officers responded to a camper trailer at the Walmart and spoke to a man who said he was injured in an explosion earlier but did not seek medical attention, the affidavit says.

That victim said he had returned to his camper where he found a small tan box underneath his camper near the steps, according to the affidavit. The victim said the box had a pink symbol on the top of it. He told police he thought someone had dropped a gift off to him and attempted to open it. When he did that, according to the affidavit, the box exploded in his face. Officers observed multiple injuries to the victim's face and his left ear.

Following the execution of a search warrant for Armijo's home and vehicle, he confessed to purchasing the components and building the explosives, according to the affidavit. He also said he was familiar with the first victim because he sold the person a guitar but was never paid, the affidavit says.

His girlfriend admitted to police, according to the affidavit, that she wrote the note that appeared on the box that exploded.

One of the officers investigating the incident noted in the affidavit that he had "personal knowledge" that Armijo was previously arrested for setting booby traps at 804 Colorado Ave. that were rigged to "kill or wound animals."

Officers are still working both scenes and are questioning a second person of interest, a Trinidad Police Facebook post says.

TPD requested the assistance of the Bureau of Alcohol, Tobacco, Firearms, and Explosives (ATF) along with the Pueblo Police Department Bomb Squad. All three agencies are investigating.

Anyone who may have information about either incident should call TPD at 719-846-4441 or the ATF at 1-888-ATF-BOMB. They can also email ATFTips@atf.gov or submit an anonymous tip through the ReportIt app which is available on Google Play and the Apple App Store, or by visiting www.reportit.com.