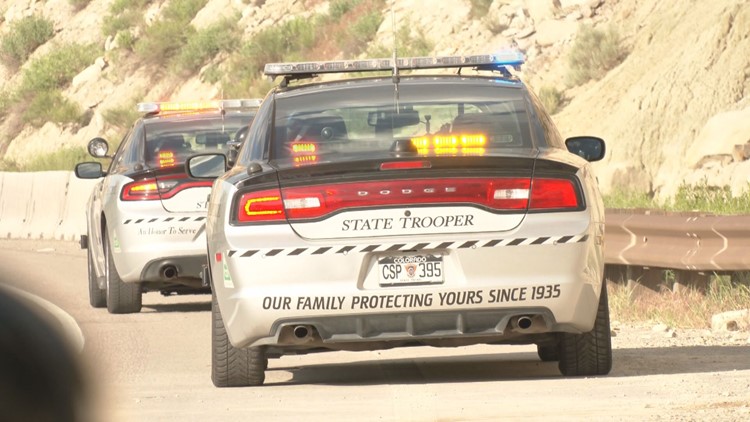 Woman steals patrol car on I-70 while in custody, CSP says

MESA COUNTY, Colo. — A woman is behind bars after Colorado State Patrol (CSP) said she stole and crashed a patrol car while she was in custody on suspicion of running from police after she was driving another stolen vehicle.

The suspect, identified as 29-year-old Venessa Jaramillo, is being held in the Mesa County Jail after the Friday afternoon incident, which happened on Interstate 70 just east of Palisade. She was already wanted on two misdemeanors and a felony warrant in Lake County, according to a news release from CSP.

Officers first encountered Jaramillo about 3:40 p.m., when troopers learned a vehicle stolen out of Montezuma County had crashed on I-70 east of the Beaver Trail tunnel. Jaramillo and a man, identified as 36-year-old Nickolas Mascarenas, took off running, according to the release.

According to the release, Jaramillo ran across I-70 and jumped into the Colorado River to avoid the trooper who was following her. She was taken into custody a short time later, and that's when CSP said she went stole a patrol vehicle.

This led to a pursuit that ended when the patrol vehicle crashed just east of De Beque. CSP said Jaramillo was taken into custody again.

Mascarenas, meanwhile, was arrested five hours later while he was walking in the city of Palisade, according to the release. He was wanted on outstanding felony warrants outside of Eagle and Lake counties.

During the search for the two suspects, a trooper responding with his lights flashing and sirens blaring got into a crash with a motorcyclist, CSP said. The trooper drove to the hospital as a precaution, and the motorcycle rider sustained minor injuries.

This crash remains under investigation.