The owners of Pembrooke on the Green in southeast Denver have been fined thousands of dollars following multiple reports of rats on the property. 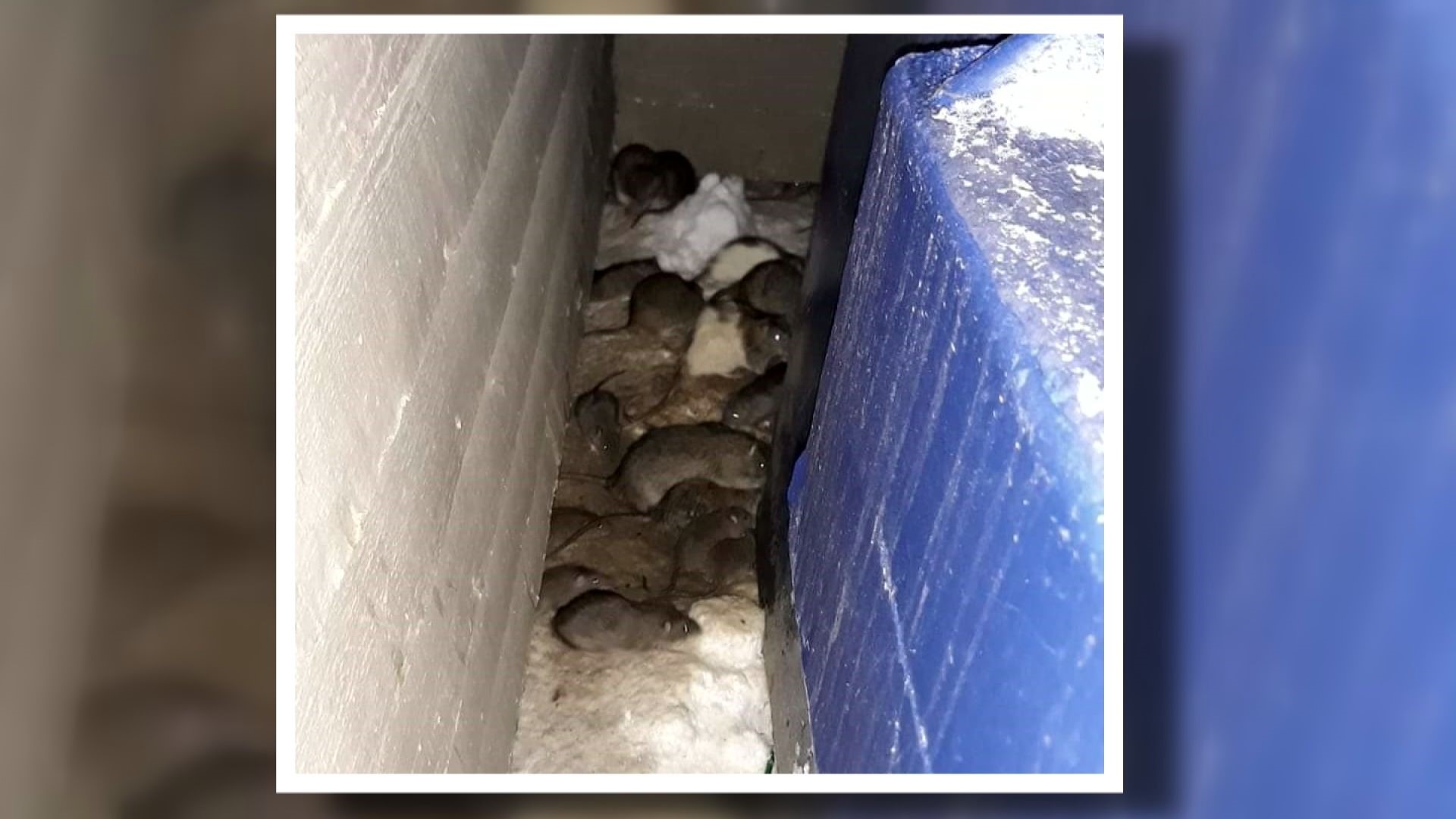 Monica and Rodolfo Ramirez moved into a one-bedroom suite at Pembrooke on the Green, an apartment complex in southeast Denver, in April of last year.

It wasn’t long after they signed their one-year lease that the couple said they started seeing rodents scurrying around the property near dumpsters, doorways and even the balcony at night.

Then in February, an unexpected visit turned deadly.

“We heard noise in the heater first… When we tried to turn it on, we thought something must be going wrong,” Monica Ramirez said during a Spanish-language interview translated by 9NEWS. “My husband went to check it out and the rat came out.

“My husband had a bat and he first hit the rat with it. But the rat kept running so then he grabbed the screwdriver and stabbed it with it.”

Credit: KUSA
Monica Ramirez speaks to 9NEWS about conditions at her apartment at Pembrooke at the Green.

RELATED: Study names Denver 10th rattiest city in the country. Here’s what you can do if you have a rat problem.

The couple alerted property management, and a member of the maintenance team responded by filling the hole where the rodent came into the apartment with foam. The couple bought traps and set them. They said the next day, another dead rat was found in their furnace room.

9NEWS has reached out to Oak Coast Properties, the California-based company that owns Pembrooke on the Green, multiple times. Phillip Nahas, the co-founder and managing partner of Oak Coast Properties, declined multiple requests for comment and directed 9NEWS to BLDG Management, a Denver-based property management company.

The company’s receptionist said no comment would be provided about the complaints, and the law firm representing the LLC has not answered calls or emails requesting comment.

1 / 10
Courtesy Ramirez Family
Rodolfo Ramirez holds a rat he and his wife found in their Denver apartment at Pembrooke on the Green.

A history of complaints

Denver Public Health and Environment said there have been 16 complaints of rodents at Pembrooke on the Green since January 2018, and half of those reported sightings happened inside apartments.

The department said it investigates every complaint and it starts with lower-level enforcement aimed at getting property owners to comply with health codes and rodent control.

“We have to look at each situation unique to its environment," said Ann Williams, deputy director of the Denver Department of Public Health and Environment. "So Pembrooke for example. We are dealing with 950 units. So, seven complaints inside about potential rodents inside is less than 1% of that entire complex. That’s not to say that they are not important."

After it failed rodent inspections, the city took the property owner to Denver County Court, and the first case was filed on Aug. 9, 2018 -- six months after the first complaint.

According to court records, multiple rodent burrow holes, pest droppings, and a dead rat were found at the apartment complex.

The property owner was fined $469 and ordered to take action to remove the rats.

“When we first met with them to discuss the problem back in 2018, we set forth certain protocols and certain instructions to them to manage their problem. And we were not seeing meaningful progress there,” Williams said.

Credit: KUSA
A rat peeking from under a dumpster at the Pembrooke on the Green apartment complex in southeast Denver.

A second court case was filed on April 5 on four violations, according to court records.

- Failure to comply with issues ordered on four previous dates

- Failure to maintain dumpster areas free from food or harborage for rats.

The Denver Department of Public Health and Environment said it fined the property an additional $2,000 for a total of $2,469. That’s about two and half month’s rent on one of its one bedroom apartments.

Last week, the city said it fined the property another $999 – the highest fine per infraction under Denver ordinance. Pembrooke on the Green is also under weekly inspection by the Denver Department of Public Health and the Environment.

Credit: Courtesy photo
A woman showed 9NEWS the remains of rats she found under the hood of her car at the Pembrooke at the Green apartment complex.

The fines now total $3,469, and per a court order, Pembrooke on the Green is required to hire an exterminator, remove bushes, and fill burrows. The city has confirmed that some of the work has taken place, but the owner could face more fines and court orders if it fails follow-up inspections.

The company is due in court again on May 15.

Rats and mice spread over 35 diseases, according to the Centers for Disease Control and Prevention. These diseases can be spread to humans directly, through the handling of rodents, through contact with rodent feces, urine, or saliva, or through rodent bites.

“This is certainly something that should be taken seriously,” said Dr. Michelle Barron, an infectious disease expert with UCHealth. “These are obviously coming from the environment and can spread disease.”

The Ramirez family moved out of Pembrooke on the Green earlier this month.

What a renter can do about a rat problem

If a property owner is ignoring or refusing to address issues and concerns from tenants, what rights do renters have? There is state statute called the Warranty of Habitability Act. Under this act, when a tenant rents an apartment, it’s expected the landlord keeps the property in a livable condition. That would include things like heat, locking doors, working appliances, and free of mold and rodents among other conditions.

State Rep. Dominique Jackson (D-Arapahoe County) is behind House Bill 19-1170, which would update Colorado’s Warranty of Habitability Act to clearly define the meaning of “uninhabitable.”

“The statue hasn’t been updated in over a decade," Jackson said. "It was weighted very heavily toward the landlord."

“Basically, all it said was that people should live in safe healthy conditions. That’s all about it said... Now, provided this bill becomes law, they will have the right to withhold their rent and make sure that they are living in habitable conditions.”

The bill passed and awaits a signature or veto from Gov. Jared Polis.

If you find yourself in a rodent situation with your landlord and are not getting answers, if you live in Denver, you can file a complaint online or by calling 311.

You can find a direct link here: https://bit.ly/2a5gGkK

Outside of Denver, complaints are handled by specific counties. Contact your county and city to learn how to make reports against landlords.