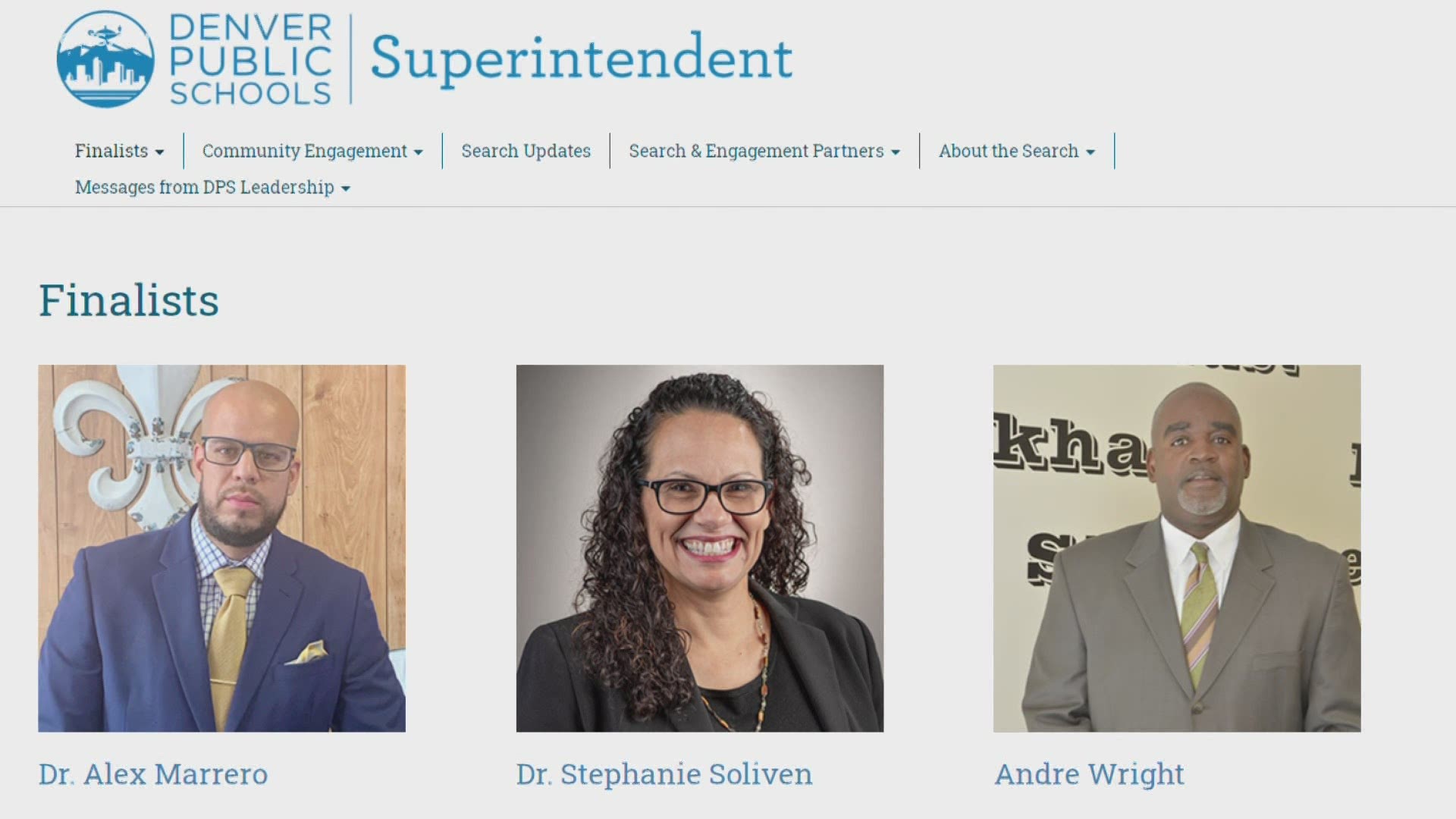 DENVER — Even though Monday night is the last chance for public input, community groups want Denver Public Schools to put the brakes on picking a new superintendent.

"I see them as competent, caring, compassionate, qualified and committed folks, but, I don't see a fit for what we need at the current time here in town," John Bailey said.

Bailey is program director for Colorado Black Round Table, a coalition of elected officials, faith leaders and community organizations.

> The Coalition of Education Advocates held a news conference to share these concerns on Thursday evening:

None of the finalists have served as a full-time superintendent. Bailey believes the search should be restarted.

"We've been fighting this fight for generations in Denver," former DPS board member Theresa Peña said. "If this board is serious about student achievement, then we cannot allow somebody to learn on the job at the expense of our teachers and our kids."

Milo Marquez, a DPS parent who works with the Auraria Historical Advocacy Council, argues the candidates haven't shown they are equipped to serve a district of predominantly Latino students. More than a third of DPS students are designated as English language learners.

"That's why it's paramount that we have a superintendent that is bilingual, biliterate and understands our community and our culture here in the southwest," Marquez said.

Van Schoales is president of A+ Colorado, a public education advocacy group and he said the superintendent search did not yield typical results.

"They've had fewer applicants than would typically be the case for a district like Denver," Schoales said.

Schoales said the school board is creating an artificial timeline to a have new superintendent selected.

"I definitely think that there's enormous pressure to have somebody ready to go in July or August and I think that that's a mistake," Schoales said.

Bailey said interim superintendent Dwight Jones should remain in place for another year before picking a new permanent leader.

"I think that we need to be more purposeful and much more thoughtful in our approach and not just rush to judgement because we want to show leadership and we think that by appointing someone right away, that's an expression of leadership," Bailey said.

The DPS School Board released a statement:

“The DPS superintendent hiring process is still underway, and the Board is very excited about the talent and experience of the finalists. We remain committed to appointing a leader in the next four weeks, and we thank the community for its input and feedback on our three finalists, which we are considering in our deliberations.”

Schoales said DPS is unique because the district embraces charter schools and innovation schools which are autonomous from the district.

"I mean half of the schools are not directly managed by Denver. That's very unusual. In fact, Denver is the only district, large district in the country that's like this," Schoales said. "I also do not believe collectively (the finalists are) of the caliber and experience required for Denver."

Schoales adds that the board's description of the ideal candidate is that of the former Superintendent Susana Cordova who left the district after reported conflicts with the current school board.

"The sorts of experiences and orientation that Susana Cordova had and they pushed her out," Schoales said. "Now, they're looking to replace her with somebody that's supposed to be just like her."

Monday night, the school board is closing community input on the superintendent search before heading into executive session to discuss the three finalists.

"So, I'm hoping that folks will hear us. Folks will take our thoughts into their considerations, their deliberations." Bailey said. "We don't have time to deal with people talking about, I would like to see this. Denver has some specific plans that need to be implemented."

Peña hopes the community advocates can meet with the school board this weekend.