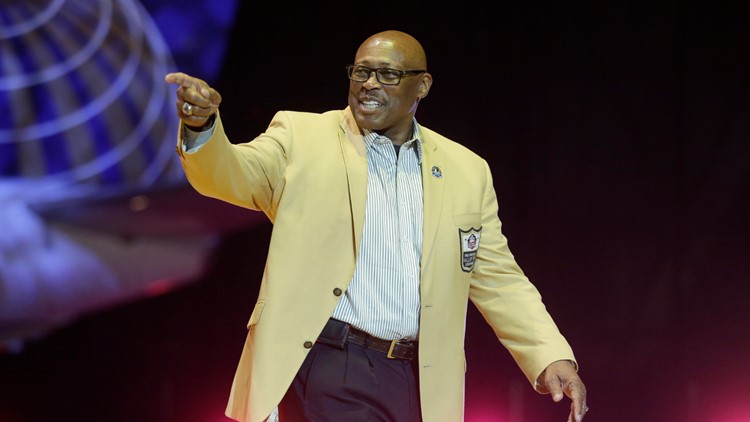 Photo by: AP
Floyd Little is introduced before the inaugural Pro Football Hall of Fame Fan Fest Friday, May 2, 2014, at the International Exposition Center in Cleveland. (AP Photo/Mark Duncan)

DU will honor a Broncos legend this weekend

Little, a Broncos running back from 1967 to 1975, will be awarded both honors during the University of Denver's Alumni Weekend which begins Friday, May 17.

Little graduated from DU in 1975 with a Master's degree in judicial administration after playing his entire NFL career with the Broncos.

Denver Broncos unveil new signage in their stadium honoring the players who have had their jerseys retired, No. 7 for John Elway, left, No. 44 for Floyd Little and No. 18, Frank Tripucka before a NFL football game against the Indianapolis Colts, Sunday, Sept. 18, 2016, in Denver. (AP Photo/Jack Dempsey)
AP

An original member of the Broncos' Ring of Fame, Little's No. 44 has been retired by the team and he was inducted into the Pro Football Hall of Fame in 2010.

Little will receive DU's Distinguished Alumni Award during a celebration on Friday, May 17 and will be awarded an honorary Juris Doctor (J.D.) degree on Saturday, May 18 during a commencement ceremony at Sturm College of Law.

RELATED: Broncos notes: Flacco the one and only as OTAs begin Monday