Academy of Advanced Learning touted its procedures for in-person learning during summer and fall classes. 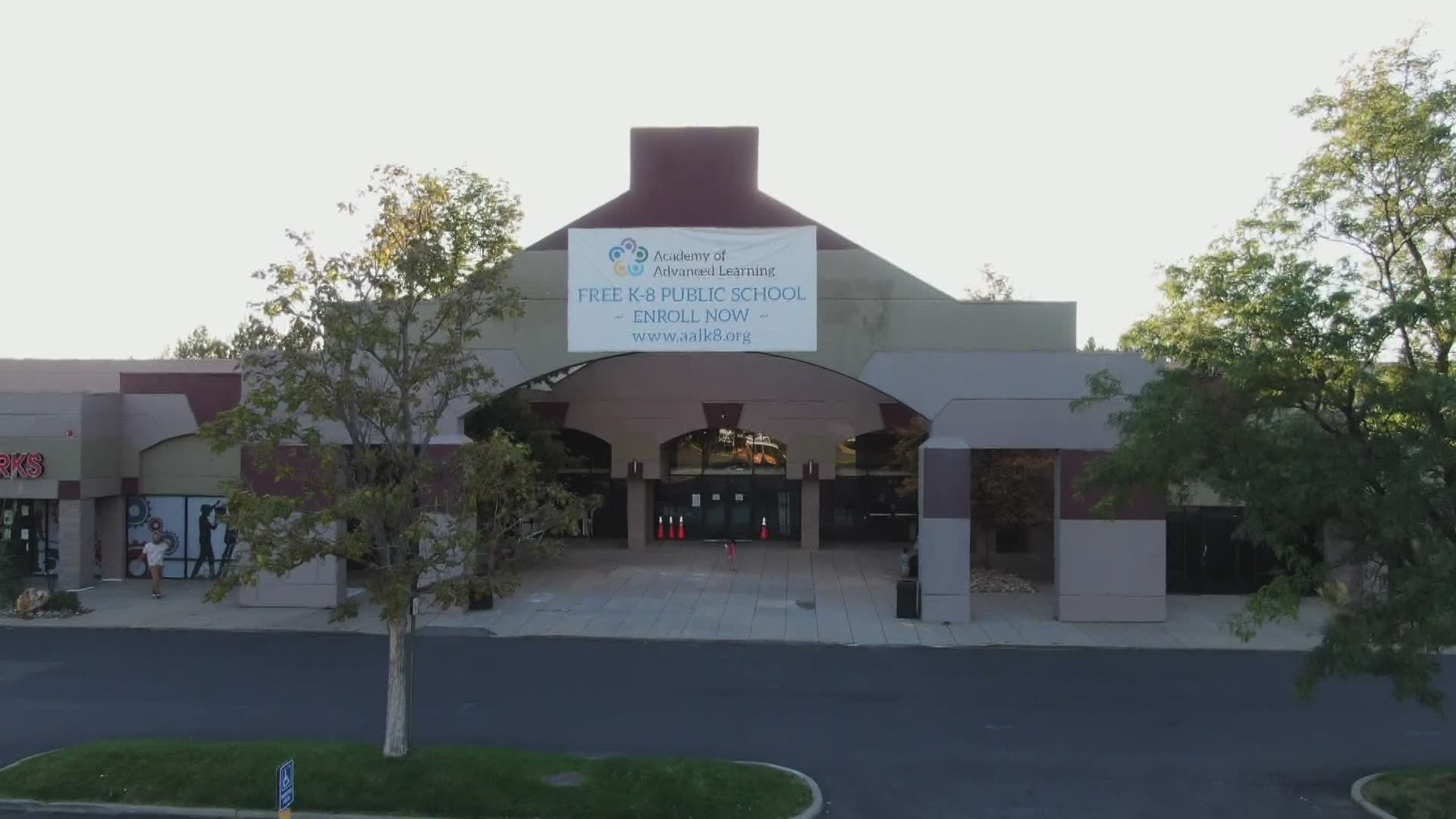 AURORA, Colo. — Depending on who you ask, the Academy of Advanced Learning sounds like two different schools.

In July, 9NEWS visited the charter school in Aurora which touted a plan to have in-person learning safely. At the time, Principal Linda August said that in addition to strict cleaning protocols, classes above kindergarten would be split up into two groups capped at a maximum of ten people.

She said one group would learn with the teacher and the other group would be in an area next door learning from the same teacher through Zoom. The groups would then switch places the next day. The idea, August said, was for COVID containment.

"For most of our grade levels, we have them in groups of ten and if something happens with one student, then we can trace that better," August said on July 23.

Since the 9NEWS visit in July, Principal August has quit along with two assistant principals including Mary Higgins.

"It made me highly uncomfortable to the point which is why I walked," Higgins said.

Higgins said the initial 9NEWS visit was staged by Mike Miles. Miles is the CEO of Third Future Schools, the charter school network that governs the Academy of Advanced Learning.

"With COVID, we weren't even following through with all the measures that he claimed we were doing for the safety of our students and staff," Higgins said.

Higgins said she was instructed to mislead parents about having a new HVAC system, about the number of kids capped in each room, and about how often the school was being sanitized.

"That the bathroom will be cleaned every hour on the hour. I never once saw a cleaning staff member during the day. I only saw them come in the evenings," Higgins said. "I couldn't stand, as a leader, as a face of the organization anymore knowing that we weren't practicing what we preached."

"To be entirely honest, I didn't think it was good to have the news in there in the first place," Smith said. "I thought what we were doing was irresponsible."

Smith said classes were split up, but some rooms had up to 20 kids, not 10.

"I think it was a bait and switch, really," Smith said.

Higgins said the kids who were supposed to be separated, learning through Zoom, were primarily left alone despite promises from Miles.

"He said learning coaches were monitoring, well, it was one learning coach for me for about eight classrooms. So, the majority of the day students were unsupervised," Higgins said.

In addition, both Higgins and Smith said the work environment was toxic.

"Yeah, I would absolutely use the word abusive," Smith said.

Higgins said she was forced to work 20-hour days to get the school COVID-ready for in-person classes.

"Mike did not hire enough people, so he had us doing everything," Higgins said. "I learned very quickly, my role was a catchall."

But, the Academy of Advanced Learning is a high-achieving school academically. The kindergarten through eighth-grade charter program has been recognized with awards from the Colorado Department of Education and from the private sector.

"For people to say it's not safe, that's simply not true," Miles said. "Please go by the school and check it out for yourself."

We did. Zach Craddock is the Director of Schools and showed us around for our second visit.

The Academy of Advanced Learning is now on three separate campuses. He gave a tour of the main campus, which did show social distancing in the classroom, desks being sanitized, and kids separated in a common area or in a room next door with supervision.

"Learning coaches out here as well," Craddock said. "Teachers in the classroom."

Craddock said classes from kindergarten to second grade did have to expand to have more kids together than 10. But, otherwise, Craddock said the school is still safe.

"Our protocols have stayed the same. We follow the guidance from CDC, (Aurora Public Schools), Tri-County Health, and (Colorado Department of Education)," Craddock said. "Nothing has changed."

"Actually, no, it's not safe. It's dangerous," Smith said.

Miles said including summer school, he has had in-person classes for 12 weeks.

"We are very transparent, very open, anybody can come by with an appointment and book. The kids would say if things were not safe. But, the real proof is in the pudding," Miles said.

He said since the fall semester started, the Academy of Advanced Learning has had only two confirmed cases of COVID in a program with around 900 students.

He also clearly refutes any allegations of verbal abuse.

"I think anybody who knows me, knows that I am not a yeller," Miles said. "I don't do that."

"He's yelled at me personally. So, I know he's a yeller," Brophy said.

Brophy said she acts as the guardian for her two grandnieces who live with her. She sends them to the Academy of Advanced Learning and said Miles has been abusive to her and her students.

"I've seen him talk to other parents and students and teachers with a level of disrespect that's not okay," Brophy said.

Smith said he has, too.

"I've heard him ask if a student had a disability because she didn't speak English," Smith said. "Really, really rough things."

Higgins said the fear of Miles was widespread.

Brophy adds that communication is so bad that she has no idea what's going on inside the building right now.

That is a question with different answers, depending on who you ask.

"It wasn't real. It felt like we were on stage pretending what could be, but the reality was not how it was going to play out," Higgins said.

Miles said people quit because of the pandemic.

"When there's a new situation and COVID is new for everybody, they have to determine whether or not they want to work in a school that is in person," Miles said.

The Colorado Department of Public Health and Environment said it cannot disclose information about individual cases of COVID popping up in a school. But, the Academy of Advanced Learning is NOT listed by the state as a source of an outbreak.