The Washington Post reported that a federal class action lawsuit has been filed against The College Board for technical problems. 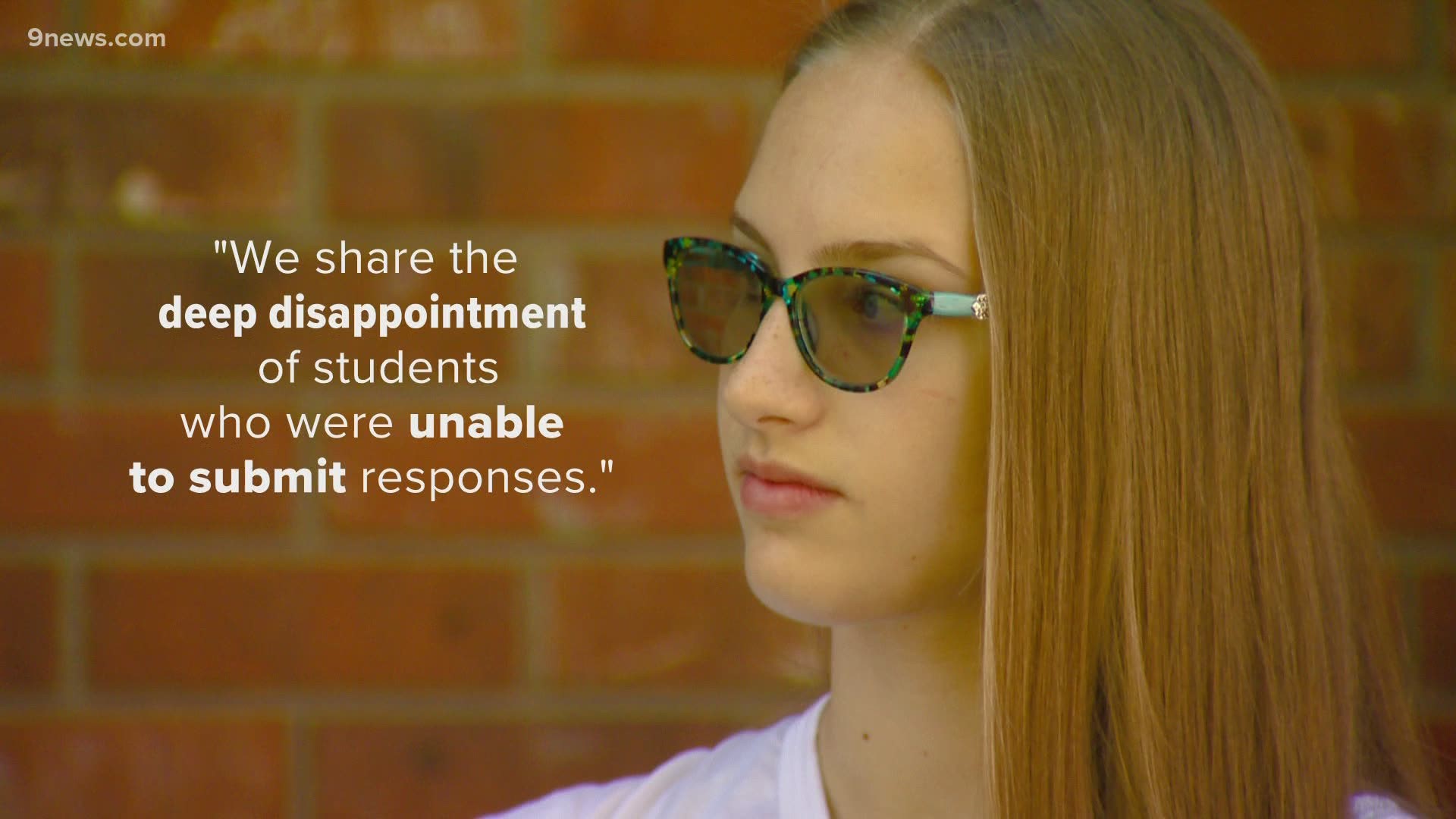 FORT COLLINS, Colo. — When Ashley Morris first started taking Advanced Placement (AP) classes in physics and human geography, she thought it was her chance to earn college credit. Instead, she got an experience she could never study for.

"We're anxious. We are freaking out. We're nervous," Ashley said. "We don't know what's going on."

Ashley is a sophomore at Rocky Mountain High School in Fort Collins, where she was initially going to take her AP exams. But COVID-19 forced The College Board to administer all its tests online for the first time ever. All tests are essentially open-book, essay exams.

"So, I finished. I go to hit submit. Everything was working fine," Ashley said. "I could do anything on that page except for hit the submit button."

Ashley said on both exams, her answers could not be submitted. She said she believes it was a problem with The College Board computers and software.

"I'm watching my time count down and I can't do anything," Ashley said.

RELATED: CU Boulder regents vote to not increase tuition and fees in 2020-21

Her mother, Kirstan Morris, said she could not believe this happened two times to her daughter.

"She came out about 3 [p.m.] and burst into tears," Kirstan Morris said.

Ashley said the frustration poured over her.

"So, I'm shaking like a leaf, and then I'm crying [because] I can't do anything and that — the feeling of helplessness was the worst," Ashley said.

The College Board responded to a request for comment by sending information that stated 2.9 million students have taken AP exams with less than 1% unable to submit their answers.

"That's still about 30,000 kids around the country, and that breaks my heart," Kirstan Morris said.

Part of The College Board's information included a statement which reads:

"Every year, there is a portion of students who start but do not complete free-response questions, like those that comprise this year’s exams. Rates of completion have been higher for the online exams than on paper/pencil exams, even when considering the population of students who couldn’t successfully upload their response.

We share the deep disappointment of students who were unable to submit responses."

The Washington Post reported Wednesday that a class action lawsuit has been filed in federal court on behalf of students who had technical problems during the exams. It is seeking action including monetary damages. An attorney told the Washington Post that the lawsuit is "baseless".

AP exams continue this week through May 22. The College Board added an email option for students to communicate any technical issues for those taking exams this week.

"One thing I didn’t do is take pictures, take pictures of your answers, have timestamps, be able to prove that you had it done," Ashley said.

Ashley is hoping The College Board will allow her to retake her exams, which she said means she has to prepare all over again. She said she expects to hear an answer on her eligibility for retakes next week.