How community colleges are tackling the nursing shortage

For community colleges across the state, the easiest way to solve the state's nursing shortage is to expand four-year nursing programs. 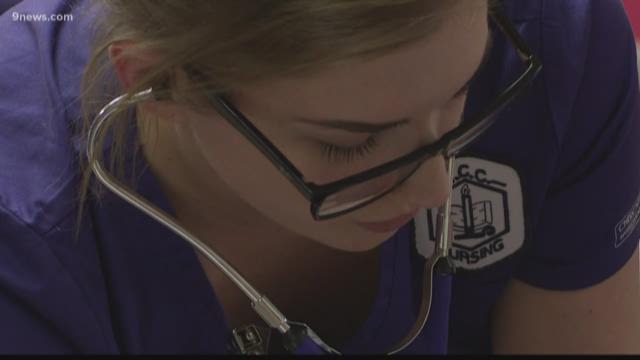 For community colleges across the state, the easiest way to solve the state's nursing shortage is to expand four-year nursing programs.

"An open door so to speak to get more people, more qualified people in the door at maybe a more affordable price than what can be offered at different institutions out there," Jason Lalonde, a nursing student at Arapahoe Community College.

Right now, Lalonde can only get an associate's degree here. He would have to find another school to get a bachelor's.

"I also now have to look at where can I transfer, what can I do, will they accept everything?" Lalonde said.

Tuesday, a bill was introduced in the Colorado House and Senate to allow community colleges to run four-year bachelor's degree programs in nursing.

"Since there is such a nursing shortage here in the state of Colorado," Hope Szypulski, director of the nursing program at Arapahoe Community College, said. "This is huge for us."

She believes the number of nurses pumped into the workforce can double or more and with Bachelor's degrees instead of an associate's.

"Every semester, we have to turn down applicants for our program just because we don't have enough spots in our program," Szypulski said.

The bills were introduced by Rep. Janet Buckner (D) and Rep. Paul Lundeen (R) in the House. Senator Tim Neville (R) and Senator Irene Aguilar (D) put forth a bill in the Senate. But, questions do remain -- will the change steal students away from 4-year universities and can the health care infrastructure support significantly more nursing students who would need clinicals and real-world training in a system with currently limited spots.

"We are confident it's going to pass just because there is such a need for nurses here in the state of Colorado," Szypulski said.

Lalonde will seek his degree the current way by switching schools. But, he hopes future students can have a better way.

"I think one of the biggest things is that it streamlines the process," Lalonde said.