Taking a voyage across the Solar System may be out of the range of a school bus, but it is within the imagination of students at Hygiene Elementary School near Longmont. 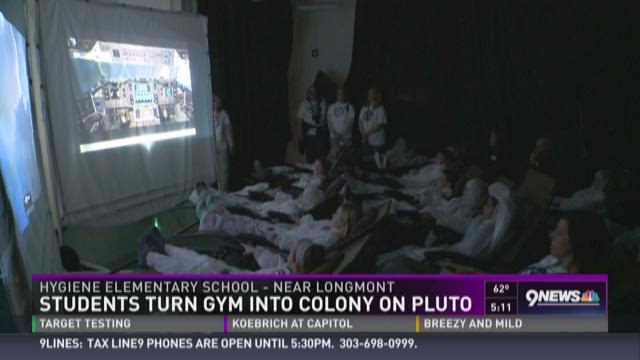 Taking a voyage across the Solar System may be out of the range of a school bus, but it is within the imagination of students at Hygiene Elementary School near Longmont.

"This is really a culmination of a full school-wide design challenge that we started in October as a school," Sherry Legrand said.

Legrand is the Science Technology Engineering Arts and Math coordinator at Hygiene Elementary which changed its focus from arts to STEAM just this school year.

"We wanted to bring the kids up to that next level," Legrand said.

Every year, the school hosts an event called "Hawk Air" where the school is transformed into a different country to have students enjoy a cultural experience. But, this year, teachers and parents decided to take the trip off world to Pluto. The school's motto is "Fly Above the Rest."

Collier says for the past few months, students in every grade level had to design different aspects of forming a colony on Pluto. They had to figure things like shelter, food, water, and even politics.

"The students all designed a flag and learning about how to design a flag; voting on it," Collier said.

The kids made the designs and parents and teachers turned them into life size by taking over the gymnasium to turn it into the surface of the dwarf planet.

Sova says she enjoyed learning about Pluto through an immersive experience.

"They made everything seem so real," Sova said.

Legrand says the looks on the students' faces was priceless.

"They've really been focused on their own grade level piece, but it's really been fun to watch them go through and get now this big picture," Legrand said. "It's all come together to see, wow, we've really built a colony as a school."

The entire school community gets to visit Pluto Thursday night during an open house. Collier says students were impressed.

"They want to know where we're going next year," Collier said.