Parents and students said they want the school district to begin in-person learning as soon as the second semester starts in January. 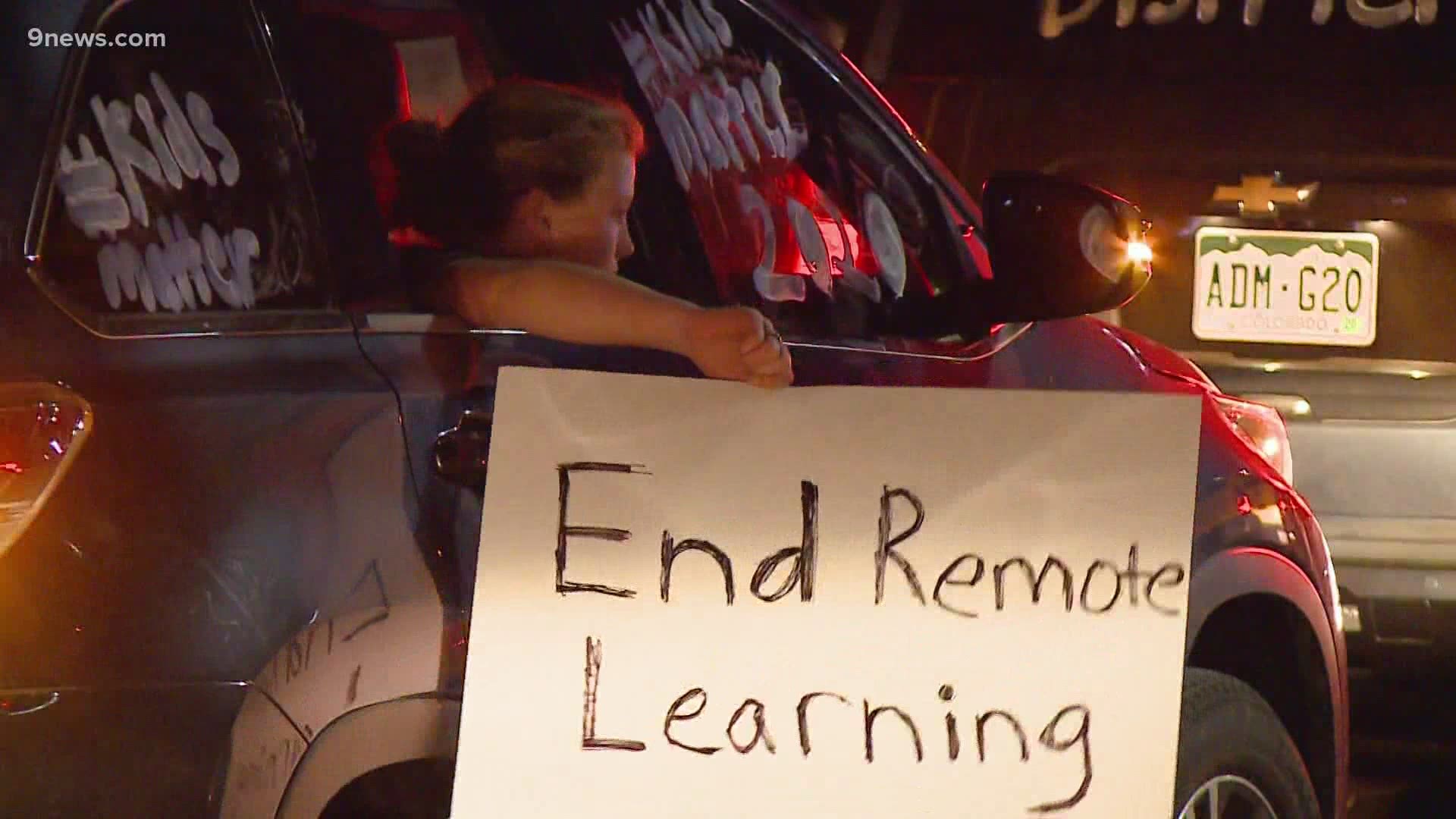 LAKEWOOD, Colo. — There was bumper-to-bumper traffic in the parking lot outside Jefferson County Public Schools Wednesday night as families demanded an immediate return to in-person learning when the second semester begins in January.

Cars snaked through the lot as the parents inside honked horns.

“We are asking JeffCo not to delay a start in January,” said Lindsay Datko, a parent of three children. “To consider the mental health of our children, the decline it's taking.”

Credit: KUSA
Students and families held a car rally outside JeffCo Public Schools Wednesday night. They want to return to in-person learning at the start of the second semester in January.

Families are struggling, Datko said, and believe remote learning is not the answer.

“It’s been really hard online,” said Teagan Eisenring, a sophomore at Conifer High School. “We’re just not having that connection with our teachers and our fellow peers that we would really like to have.”

“At home, I get distracted a bunch,” she said. “If I [have] questions, I need to wait for a specific time. We don’t get to work with other classmates and, [we] do it ourselves and that’s hard. And a lot of the parents, they don’t know what we’re learning. It’s a struggle for me because no one can really help me.”

“It doesn’t feel like I’m learning a whole lot,” Teagan added. “I’m feeling isolated from my friends, my teachers. Not creating that bond I would normally create,”

Jefferson County Schools says it's “fully committed” to return to in-person learning in January, but is still working through the details.

In an email to 9NEWS, district spokespersons Cameron Bell wrote:

“We are meeting with Jefferson County Public Health officials multiple times per week to keep current on the spread of the virus, understand what they are learning about anticipated/projected peaks, stabilizations, and reductions in positive COVID-19 case numbers, availability and distribution of a vaccine, and to discuss the conditions they recommend for a safe and stable return to in-person activities, which includes schools."

Bell said the district plans to present a plan to the school board on Wednesday, Dec. 16 for review and expects to share details about January with families before winter break starts Dec. 23.

JeffCo says it expects a phased approach for returning to in-person learning, similar to Denver Public Schools which announced its second semester plans on Tuesday.

DPS will start January with all students learning remotely, and phase students back in gradually. DPS expects to have all students who choose in-person learning back to class by February.

In November, Governor Polis announced a new task force with the goal of helping districts bring as many students as possible back for in-person learning by January.

RELATED: Task force aims to get Colorado students back in classrooms by January

During a press conference on Wednesday, the Governor again offered his support for bringing kids back to the classroom.

“We’ve learned from the very early days of the pandemic that schools are a safe place to be,” he said. “We think, generally, it’s the safest place to be for students and teachers. They follow protocols well. We’ve had a very low incidence in our schools.”

“We need to be really cognizant of trauma that kids, teachers, educators have dealt with. And make that a key part of transitioning back into the school experience,” said Erin Anderson, an assistant professor at the University of Denver Morgridge School of Education. “Instruction will come, but I don’t think anybody will be prepared for that until those other needs are met.”

Anderson is part of a team of researchers that interviewed 120 principals in 19 different states to learn more about the impact of the pandemic on education.

“It was important to understand, in real-time, what the experiences were like and what schools were having to address,” she said.

Anderson said the project revealed an enormous amount of stress for educators, students and their families.

“We weren’t really even asking about wellbeing and mental health, and it came out in every interview across every setting,” she said.

Researchers also found previous inequities with the school system were amplified under remote-learning conditions. And they found the ever-changing location of learning made the “learning” part even harder.

“Districts have been trying all kinds of hybrid models, going to school, coming home,” she explained. “But I would argue, some of the most important pieces being about the well-being of students, families and teachers – is that this constant shift of what learning is going to look like is actually not allowing anybody to learn to the degree that they want.”