'Our kids are not alright today': For some kids, going back to school triggers fears of bullying

A family who's son was persistently bullied started a charity to defend kids. Here are their tips for parents, teacher & students heading back to school. 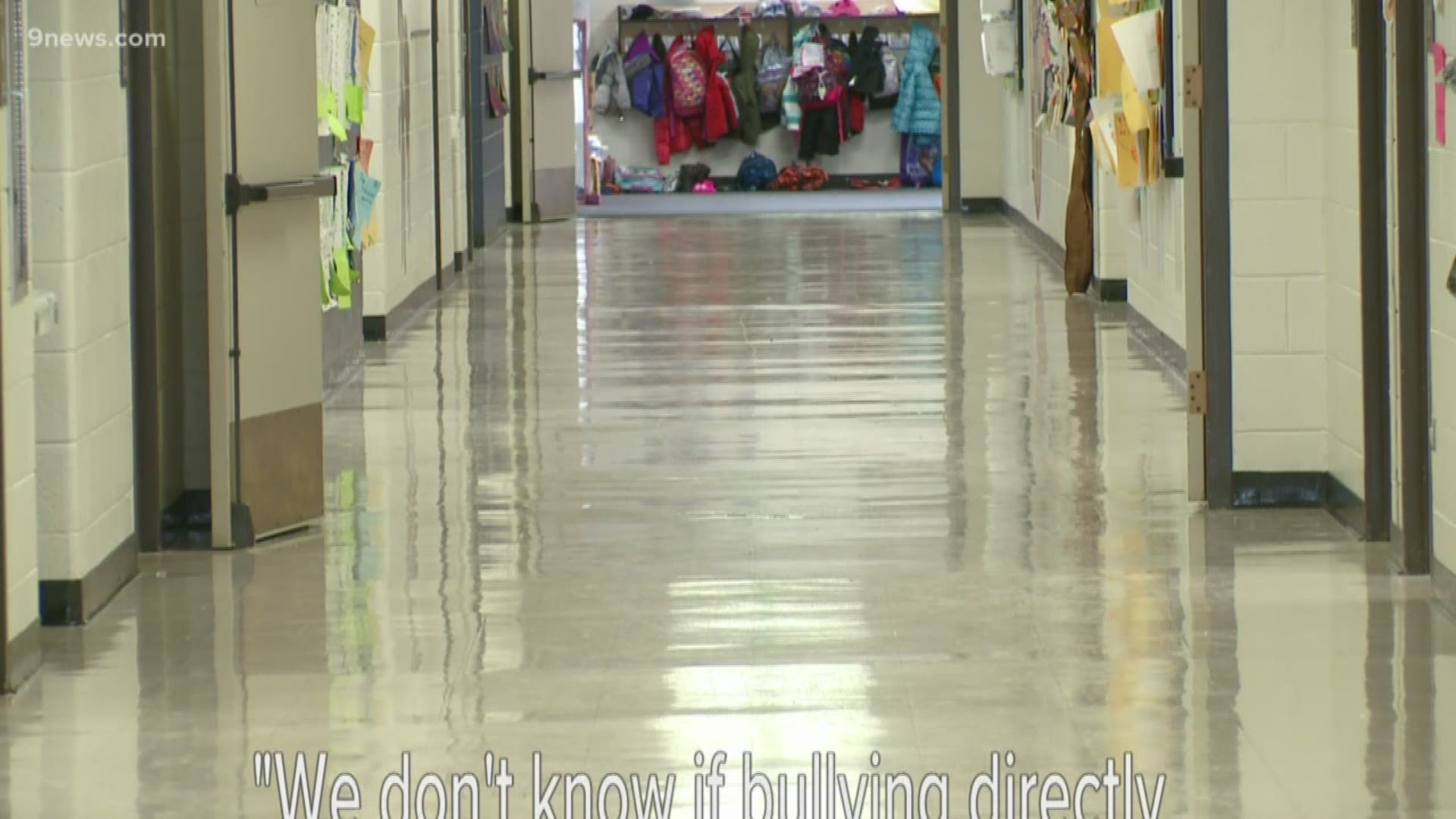 DENVER, Colorado — A few years ago, the end of summer would have sent Tom and Dru Ahlborg's son into a tailspin.

"He had anxiety and severe panic attacks," Tom Ahlborg said. "He missed probably the first 20 Mondays of school. It just was too much."

9NEWS is choosing not to use Tom and Dru Ahlborg's son's name since his is a child.

The Ahlborgs said he was bullied.

"It was pure terror," Dru Ahlborg said, adding that he fears his son could be targeted again.

The Ahlborgs said the bullying started in middle school.

According to stopbulling.org, an anti-bullying website operated by the U.S. Department of Health and Human Services, most bullying happens in middle school.

The Centers for Disease Control and Prevention defines bullying by three key characteristics:

While cyber-bullying attracts headlines, a 2017 survey conducted by the CDC illustrates that bullying is still very prevalent on campus. In the survey, 19% of high school students reported being bullied at school in the previous year. In the same survey, 14.9% of students that age reported being cyber-bullied over that same time frame.

Tom and Dru Ahlborg said that their son "suffered some serious consequences" from the bullying he endured.

"He tried to take his own life," Tom Ahlborg said. "I know what was told to us was we’re some of the lucky parents because he didn’t succeed."

The relationship between bullying and suicide is complicated.

According to the website StopBullying.gov: "Most young people who are bullied don't become suicidal." Persistent bullying can "lead to or worsen feelings of isolation, rejection, exclusion and despair, as well as depression and anxiety."

Tom Ahlborg said his son struggled with all of those feelings and found it difficult to go to school.

It got so bad that the Ahlborgs sued their son's school in 2017.

After litigation, the concerned parents started a charity. The mission of the Bullying Recovery Resource Center is to defend children who have been bullied and help rebuild lives.

"We really realized when the story hit how many children out there are bullied," Tom Ahlbord said. "Parents out there just need some help. That’s why we started Bullying Recovery Resource Center. The BRRC is unlike many prevention organizations across the country. It educates families while providing cost-effective counseling and legal services."

RELATED: 3 times as many girls as boys report harassment as cyberbullying rises

RELATED: Why do trolls attack victims of tragedy?

The Ahlborgs also make sure every parent is heard while giving each kid a place to have some fun. Dru said

"These kids need to have a lot of fun in their life. They don’t," Dru Ahlborg said. "They don’t have a lot of places to go anymore. Some of them have lost all of their friendships."

The Ahlborgs started the process of rebuilding their son's life by enrolling him in a new school. They said he is doing much better today, but the trauma followed him initially.

"Going back to a different school, if there’s lockers and all of that stuff, there’s almost a little bit of a battlefield fatigue that’s really happening to these kids," Tom Ahlborg said.

Author and bullying expert Barbara Coloroso said it's not uncommon for children who were targeted in the past to fear returning to school.

"It’s a time of great anxiety for kids who have been previously bullied," she said.

Coloroso and the Ahblorgs also said that parents, school administrators and students should be vigilant this time of year.

9NEWS asked them what each group can do to ensure all kids feel safe going back to school.

Dru Ahlborg: Knowing that they need to check in with their child and listen, listen, listen. If they tell you they're being bullied or something is happening at school, follow up, report it, and keep reporting it. Most of all, listen and understand. It's not a right of passage and it's not normal activity for kids. Do whatever you can to protect your children.

Tom Ahlborg: Look for the warning signs. Make sure they are in tune with their kids even before. Obviously, it's usual to have a little bit of anxiety as they head back to school, I think every child has some of that, it's like our jobs. It's not usual to be hysterical or to have full blown panic attacks or anxiety. I think those are the things you can look for to say, something's up. Look for isolation, depression, not wanting to go to school, wanting to be sick all of the time.

Tom Ahlborg: I would tell them that they really need to be vigilant. Bullying happens...Don’t pass it off as conflict...How is it supposed to be reported? What do you do when it is reported? How do you properly investigate it? What are the teachers supposed to do when it’s done? Do that fully and then issue consequences...It's your job as an adult to stop the bullying.

Barbara Coloroso: I work a lot with schools helping them develop the "three Ps" — a strong anti-bullying policy based on the federal law and the state law. Most schools have that. It's that second P that's missing. Procedures in place.

Number one, hold the bully accountable and reform them.

Number two, help the targeted kid feel safe and say to them, 'I do hear you. It's not your fault. You're not in this alone. There are things you can do.'

We help empower them to stand up when we're not around. Then, is there somebody in the school that a child can report to and know there won't be retaliation because you reported it, that they will be listened to? Then, what are we going to do with all of those not so innocent bystanders? What role did they play? Can they move out of that role effectively?

The last P is so important. It's not anti-bullying, it's programs in place that help kids develop a more deeply caring community that they're living in.

Barbara Coloroso: I always say to kids, ‘You don’t have to like every kid in this classroom, but you must honor their humanity. Treat them with dignity and regard.' Caring deeply is the antithesis of hate...Going back to school, I would like every kid to walk in that door and believe that whoever they meet, they’re equals to and they have dignity and regard...If every kid can walk into that school and know that, 'I’m an I, I’m unique and so is the other person and we have a common humanity,' our young people can lead the way and help us as adults to have a more deeply caring society.

Dru Ahlborg: Children who have been bullied can become up-standers. That's the ultimate goal, for the child who has been bullied, who has been through the trenches to turn around and help another child. To say, 'Gosh, I've been there,' or help report it or help the child report it. We've had those stories shared in our group and that's pretty remarkable.