As the state reduced the share of funding taxpayers provided for higher education, students stepped up to fund many of those amenities through mandatory fees. 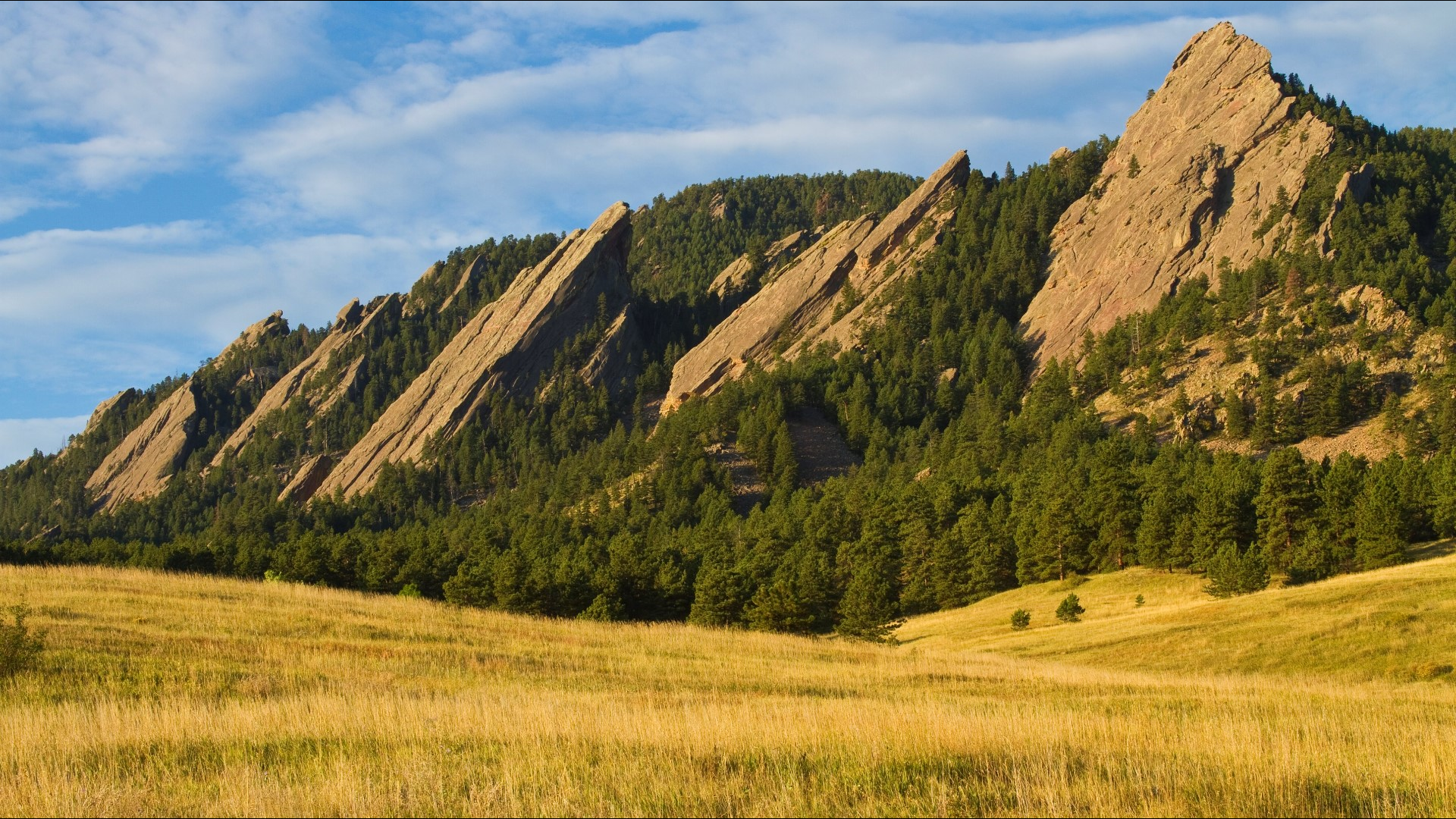 BOULDER, Colo — In the middle of the University of Colorado, Boulder campus, there is a buffalo-shaped pool.

In years past, photos show students tanning by the poolside or playing an impromptu game of water volleyball. It was like a slice of spring break in Cancún made its way back to Colorado.

During the winter, the pool sits empty and unused. But due to the pandemic, it may stay that way for the rest of the school year. Most of the other amenities on CU’s campus will stay shut as well.

On-campus dorms, classrooms and more closed when the university shifted to a completely remote operation in an attempt to keep COVID-19 cases down.

As the state reduced the share of funding taxpayers provided for higher education, students stepped up to fund many of those amenities through mandatory fees, and they are still being charged for them, even as they are barred from using them during the pandemic.

The pool is part of a $63.5 million Rec Center renovation project funded by a student fee approved in 2011. When Regents convened to approve the student government’s plan, some expressed concerns about how it would hike up student fees by hundreds of dollars per semester.

Nearly a decade after the vote to renovate the Rec Center passed, students are still footing the bill. On top of tuition and other fees, students taking more than one class are required to pay about $107 per semester to help pay off construction bonds.

In Boulder, the renovations to the student center were long overdue. The old center was described as “outdated” and “overcrowded” as a result of the university’s decision to defer needed maintenance for years. That has been a money-saving strategy used by universities across the state.

The increasing reliance on student-supplied dollars is dangerous, according to Metro State University Denver Vice President George Middlemist. He said when keeping affordability in mind, introducing new fees or tuition hikes to fund renovations or programs comes with consequences.

More money for the state's universities will be hard to find

Universities can’t wait forever for the state to free up more budget for them. As more time goes on, deferred maintenance fees go up. CU’s University Memorial Center, a hub for student activity and engagement, was quoted at needing around a $106 million renovation.

Greg Allan, who chairs the student Finance Board, said someone gets trapped in the elevator of the building at least once a semester.

“There are lots of needs in that building and we've been doing what we can in the meantime, taking on what's considered small projects, but still cost us about $1 to $2 million,” Allan said. “We've renovated different parts of the building that really weren't up to code and needed to be fixed. But at the same time, there are larger issues that exist that aren't going to be addressed with just a $2 million project every couple of years.”

The money will be hard to find. With the CU system holding over $1.6 billion of outstanding debt, they’re not in a position to take on additional large maintenance projects. Plus, CU uses a guaranteed tuition model, which means student fees are the most easily changed figure in a student’s bill.

Chavous, CU President Mark Kennedy, and administrators from other local universities have gone in front of the state Joint Budget Committee to advocate for an increase in state funding, which remains a contentious topic in the legislature.

“Over time, we hope the state can close the per-student funding gap,” Kennedy said. “This year's funding recommendation from the higher education presidents, which CU supports, is a modest step that you can prioritize during these challenging times.”

With coronavirus still devastating the state’s economy, Kennedy and other presidents know it’s a tough ask.

Just last May, as college students were wrapping up their first pandemic-stricken semester, 58 percent of the higher education budget was slashed in an attempt to fill the state’s revenue shortfall. Gov. Jared Polis included a restoration to pre-pandemic levels and then some in his budget proposal, which will be debated this spring.

“If we increase our tuition by a dollar, that doesn't sound like a lot, but for that student that was struggling to pay the tuition at the level we had, that may take them so they can't come to school,” Middlemist said. “And so we're constantly having those debates, which is why we have students involved in our tuition and fee conversations.”

Alaura Ward is one of those students. Like many of her classmates, she’s a first-generation student of color, who commutes from outside of Denver to make it to class. As student trustee, she represents her peers at Board of Trustee meetings.

She said she spends a lot of time trying to keep tuition and student fees down. Last semester, the board wanted to raise tuition, a recommendation Ward took issue with.

“I was like, guys, we have people that can't even have access to computers and we can't raise tuition right now. If we do like, we need to be able to provide sufficient resources, that'll help students stay in school and make sure that they're taken care of,” Ward said.

Ward said existing fees make it hard for a lot of her peers to afford tuition payments. She finds herself having to take out extra student loans in order to pay those bills.

“When I see all of these different fees and I see how they stack up, and then I see that my financial aid won't cover it completely, or the loans won't cover it, I'm then having to go to a bank and try to vouch and be like, hey guys, I'm 23. Can you guys give me an extra, like $2,000 to pay my tuition bill?” she said.

Student leaders in other campuses are also wary of the issues surrounding student fees. Isaiah Chavous is the external student body president at CU Boulder. During his term, which started last spring, he’s focused on assisting students who are struggling to afford tuition and raising graduation rates for students of color through funding scholarships or campus centers serving underrepresented student populations.

But doing that will require getting his peers to approve yet another student fee.

“I think that can be a conversation, but I also think what we're doing at that point is further pressuring our students to pay for the resources that I think should be inherent to the university experience,” Chavous said. “And so whether that comes from the university itself through their endowment or whether that's coming from the state or the federal government, it needs to happen.”

And even as buildings and amenities go unused in the pandemic, those maintenance costs keep rising.

University of Northern Colorado Chief Financial Officer Michelle Quinn said their campus has about $260 million of deferred maintenance, which the university is attempting to fund using a student capital fee.

“I think that was a significant consideration, a significant process on the part of the university to decide to do that,” she said. “Really, what was happening is that based upon the revenue in the state of Colorado, their ability to fund the facility deferred maintenance was volatile. And we couldn't rely upon that.”

Since 2018, tuition at UNC hasn’t changed for in-state students who qualify for the College Opportunity Fund. What has changed, however, is the number of student fees paid, including the capital fee. Someone taking a full course load in spring 2021 is responsible for student fees that are now 11 percent higher than two years ago.

A 2020 report commissioned by the Colorado Department of Higher Education found Colorado colleges and universities receive less budget allocation than their peers in other states. They make up for that absence through a heavy reliance on tuition and fees.

Compared to other similarly sized colleges in different states, tuition and fee revenue in Colorado is collectively 18 percent higher. The Colorado State University system and the CU system are 15 percent and 34 higher, respectively.

RELATED: Fewer students enrolling into college as pandemic rages on

Education
Harry Potter, Austin Powers, the Hobbits, Wonder Woman and Aquaman are back spreading the message of wearing masks to combat the spread of COVID-19.