Some felt Kirk gave the TWP a platform and that his visit prompted the anti-immigration fliers to be scattered about campus. 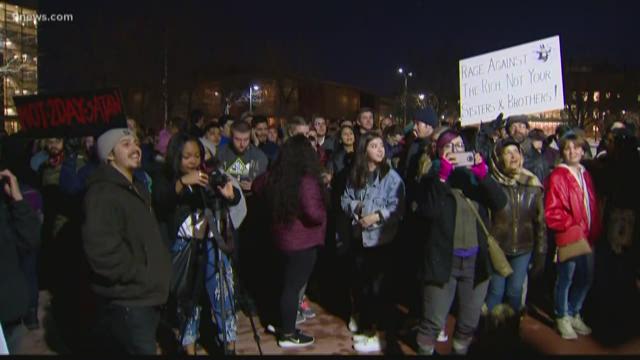 FORT COLLINS - Days after the Traditionalist Worker Party distributed anti-immigration fliers on campus, protestors stood outside on Colorado State University’s campus and protested the guest of a conservative student organization.

University President Tony Frank called the TWP “Nazis.” But he also made it clear that the conservative speaker, Charlie Kirk and the organization he founded, Turning Points USA, does not have a track record of causing disturbances on college campuses.

The event to discuss Kirk’s views against socialism was standing room only, hosted by the CSU chapter of Turning Point USA. Kirk’s opening remarks were a denouncement of white nationalism.

“Just by rule of political thumb, you should never associate radical groups outside, that just show up, with the speaker that’s speaking. So, let me make perfectly clear, I totally disassociate and denounce all these radical groups, these ethnonational - bull, can I swear? B.S. that they’re trying to say out there. It’s not who we are. It’s not what I believe, it’s not what Turning Point believes,” said Kirk, referring to the TWP and any neo-nazis who may have gathered outside of the building.

Most of the people in the crowd outside were student protestors of Kirk’s and the TWP. Some felt Kirk gave the TWP a platform and that his visit prompted the anti-immigration fliers to be scattered about campus.

“They’re making an environment that’s comfortable for the Traditionalist Workers Party to come here and get excited about that,” said student Josh Lindell about the anti-immigration fliers. “It’s just, keep out of our borders which is a ridiculous message because this is a place where we should be welcoming everyone we possibly can.”

Police dispersed the protesters before Kirk’s event let out. That’s when a few men covering their faces with bandanas, began yelling and using the Nazi salute at the protestors. Antifa yelled back. A few minor scuffles broke out but eventually, everyone cleared out.

"It has come to our attention that there are individuals and organizations who have concerns that Turning Point USA at Colorado State University is affiliated with/has invited the Traditionalist Workers Party (TWP), a radical group, to join Charlie Kirk at our upcoming event entitled “Smashing Socialism”. Turning Point USA is a 501(c)(3) nonprofit organization, and thus is not affiliated with and does not endorse any political parties. This includes the Traditionalist Workers Party and the extreme policies that they promote. TPUSA at CSU and UNC condemns white nationalism and embraces all students from all backgrounds. In addition, while this is an event open to the public and anyone who chooses to attend can with a valid ticket, the only TPUSA at CSU/UNC sponsored activity occurring on Friday, February 2 is the speech given by Charlie Kirk.

TPUSA at CSU is supportive of all Rams of all backgrounds and perspectives. We will be hosting a debrief of the event on Tuesday, February 6 in the Lory Student Center entitled “Coffee and Conversation”, intended to have students from all political backgrounds come together and discuss how our unique beliefs can, in fact, create community, despite the nationwide narrative. We invite all students interested in bridging the gap between us to attend."