The union bargaining team and the district reached an agreement early Thursday morning. It still needs to be ratified by the full union and then approved by the Denver Board of Education.
Author: Jacob Rodriguez, Allison Sylte, Janet Oravetz
Published: 11:13 AM MST February 13, 2019
Updated: 12:51 PM MST February 25, 2019

After a three-day-long strike, the Denver Classroom Teachers Association and Denver Public Schools have reached an agreement, meaning that teachers in Colorado’s largest district will return to their classrooms.

It was reached around 6 a.m. Thursday following a marathon negotiation session between both sides which began at 10 a.m. Wednesday morning.  It must still be ratified by the full union and then approved by the Denver Board of Education.

"We are recommending now to our members that we officially end the strike, Rob Gould said Monday at 6:12 a.m.

The full tentative agreement will be posted on the DCTA website later Thursday, according to a release from the union. Highlights of the agreement include an increase of between seven and eleven percent in base salary on a clear and transparent 20-step salary schedule, full cost of living increases in years two and three of the agreement, the opportunity to use professional development to move lanes on the salary schedule. The union also said it the deal would bring an end to exorbitant five-figure bonuses for senior DPS administrators.

Both sides agreed to a study of the effects of high priority school bonuses on teacher retention. You can find the details of the full agreement by clicking or tapping here

According to a release from the district, the deal invests an additional $23 million in teacher pay. It includes an average base salary increase of 11.7% next year and a cost-of-living increase the following two years. The ProComp incentive for teachers in the highest-poverty schools increases to $3,000 and the incentives for teaching in Title I schools and hard-to-fill positions are $2,000.

"I'm really excited tomorrow to put on some red," said DPS superintendent Susana Cordova. "And to be here with you to be 'Red for Ed'.  It is so critical not only that we have this agreement but that we get the same kind of commitment and collaboration around our state funding. We're in the shape that we're in because of the lack of will and the lack of collaboration at the state level to invest in our schools."

Cordova noted Colorado is in the bottom compared to other states when it comes to education funding.

Teachers are free to return to the classroom on Thursday, but the district said they were also prepared to cover classes if necessary.  If teachers choose not to return, they will receive an unpaid day, but there will no other consequences. Union negotiators said they would be staying home and taking that unpaid day in order to get some rest.

The strike, which started on Monday, marked the first for Denver teachers in 25 years. It was preceded by weeks of failed negotiations. The key points of contention between the teachers union and the district were base salaries and the incentive-based pay system.

More than 2,600 teachers called out of work on the first day of the strike, according to DPS. DCTA said that number was much higher, alleging that more than 3,700 teachers and support staff were on the picket lines.

RELATED: Your take on the DPS teachers strike: Share comments, photos and videos with 9NEWS

Thousands of students also opted not to go to class during the strike. At East High School, hundreds of students walked out on Monday shortly after video from inside the building showed what some students described as a “party” in the hallways.

A DPS spokesperson said it was much calmer later in the day. Video from East High School on Tuesday showed largely empty classrooms, and the student parking lot was about a third full. Meanwhile, dozens of teachers marched in a picket line that later moved down East Colfax Avenue to the Colorado State Capitol.

It was one of the multiple demonstrations held by Denver teachers during the labor dispute. They also marched down Speer Boulevard and stood on Interstate 25 overpasses to garner public support.

Lesson plans shared by students on the first day of the strike included 90 minutes for “exercise and electives,” as well as another 90 minutes for “college and career.” DPS said it spent more than $136,000 to have those made.

Bennet was in a particularly difficult position since he is a former superintendent of DPS.

MORE | Denver teachers strike: What is ProComp (and why does it matter)?

The seeds for the strike were planted on Nov. 1, 2005, when Denver voters approved a new way to pay teachers, commonly referred to as ProComp. It’s a pay system on top of a teacher’s normal contract that attaches incentive pay to student performance.

Fast-forward to March 2018 and DPS and the DCTA successfully negotiated a new master contract for the district’s teachers. The ProComp contract was extended to Jan. 18, 2019, but negotiations were ongoing. A month later, teachers rallied at the state Capitol as a part of the protests planned by educators nationwide over low school funding.

In September of last year, DCTA declared an impasse and said a mediator was needed. Despite going at it for months, the mediation was not successful and on Jan. 8 of this year the union filed its intent to strike with the Department of Labor and Employment and gave its required-by-law 20-day notice. 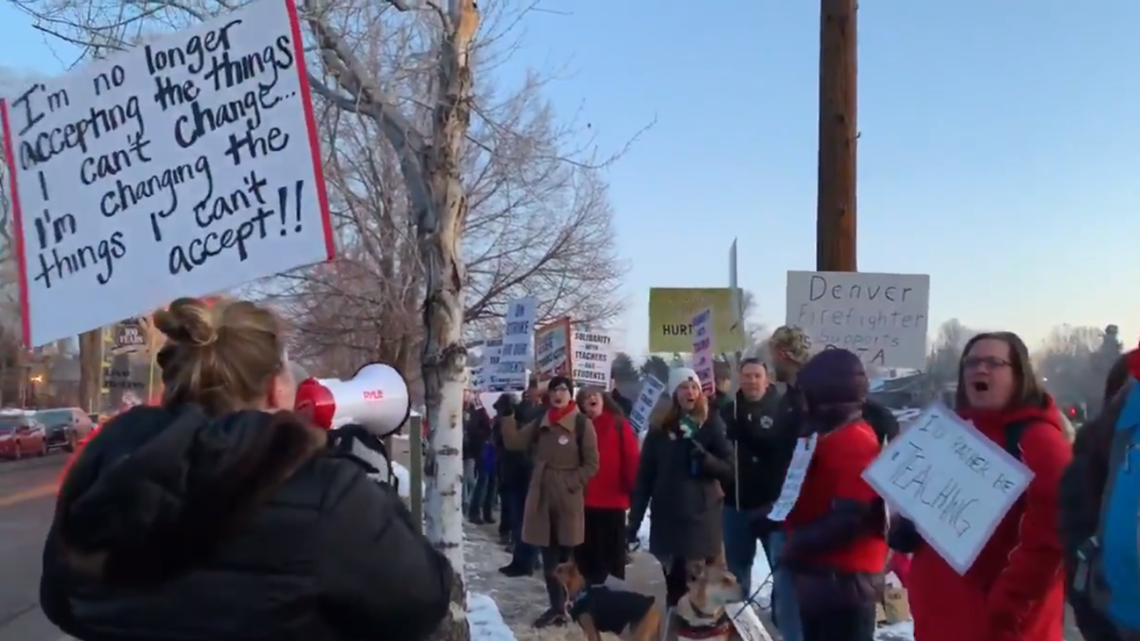 Despite ongoing negotiations, the two sides could not come to an agreement before the ProComp portion of Denver teachers’ contracts expired on Jan. 18. Four days later, the union said 93 percent of its members voted to strike. On Jan. 23, the district reached out to the labor department asking for it to intervene in the labor dispute.

In the meantime, the district had to scramble to apologize to teachers and the general public for telling its staff working on immigration visas that they would be reported to immigration officials if they went on strike.

District Superintendent Susana Cordova said she didn’t believe the communique to teachers was sent with malicious intent understood “it will be very difficult to rebuild trust in DPS that has certainly been lost as a result of this.”

In an official letter to the district superintendent, the state said it would not intervene because the two sides were so close to reaching a deal. The following Monday, after negotiations went nowhere again over the weekend, Denver teachers walked out of their classrooms and onto the picket line.