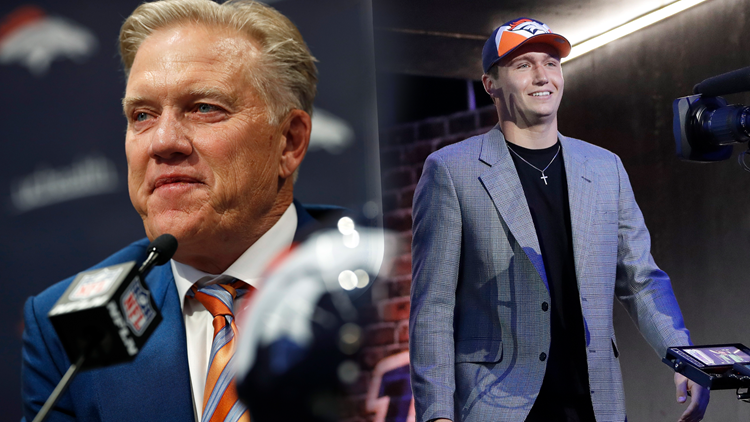 Elway on drafting Lock: 'You're always trying to find an answer to the quarterback position. You can't wait till you don't have one.'

The Broncos’ general manager made the bold move of trading up 11 spots to the upper-half of the second round to take quarterback Drew Lock, who many mocksters thought would go in the top 10 picks of the first round. More precisely, No. 10 to the Broncos. Instead, Elway got him at No. 42.

“You’re always trying to find an answer to the quarterback position,’’ Elway said in a sit-down interview with 9News. “You can’t wait till you don’t have one. We’ve been working on it and you’re always working on it.

“We feel good about what we have in Drew and his ability over the next couple years to continue to grow and make some strides. Hopefully, he’s that guy for the future.’’

It was Lock and the maneuvers to get Lock – the trade back from No. 10, where Elway may well have taken linebacker Devin Bush, and instead parlay the swap into tight Noah Fant at No. 20 and Lock at No. 42 – that generated high scores across the football landscape for Elway’s draft.

“We never know because until you put the pads on, it’s always a big jump from college football to the NFL,’’ Elway said. “But I think if you were to ask me (the day) before the draft that you’d come out with these six players would you be happy? I’d say yeah, I’d be extremely happy.’’

*After acquiring the No. 52 pick in the second round from Pittsburgh on Thursday, did he wrestle with taking a player who could start the season opener – say Hawaii linebacker Jahlani Tavai or LSU cornerback Greedy Williams or one of the Ole Miss receivers A.J. Brown or D.K. Metcalf – instead of trading up to take Lock, who if all goes well won’t play a snap in 2019?

“Well, it was important for us to get an offensive lineman,’’ Elway said, referring to taking guard Dalton Risner with the No. 41 pick – one pick ahead of where the Broncos got Lock. “That’s what we had targeted in the second. And Risner was that guy. So that was just as important.

“And then we had the ammo we got from  Pittsburgh on the first day at 52 to see if we could get up and see where things were falling. And with Drew falling like he did, we felt like it was opportunity because we knew how much we liked him and it was an opportunity for us to get great, great value in a quarterback. And we think in the future can be a starter from the second round.’’

*Elway started the draft with three picks through the first two days; five picks on the last day.

He ended up with four picks through the first two days, but only two on the last day.

“Later in the draft, I think a lot of teams were targeting guys that they liked. It wasn’t real deep. We had Juwann Winfree targeted from CU. We really liked him so that’s why we gave up our seventh round pick to pick him up in the sixth.’’

*In the six-year period between 2013-18, Elway made just three trades involving the first three rounds – moving up six spots in the second round to take receiver Cody Latimer in 2014, and trading up five spots in the first round to take Shane Ray in 2015 and Paxton Lynch in 2016.

In the 2019 draft, Elway became Trader John, making two huge trades in the first two rounds – trading down in the first round and then trading back up in the second round.

Elway in his ninth season as general manager seemed to cut it loose.

“You never know how it’s going to fall,’’ he said. “You always get a little bit nervous -- there are ways you would like it fall. You do all your draft prep and get your board set and you have people you like and you hope it falls this way and have it happen this way – and obviously it never does so you’ve got to be ready for everything.

“But especially with the first two days we felt really good about it with Dalton Risner and what he can do as far as helping us on the offensive line and what Noah can do as far as stretching the field as a tight end.’’