Broncos' former first-round pick makes case the team should have stuck with him a while longer. 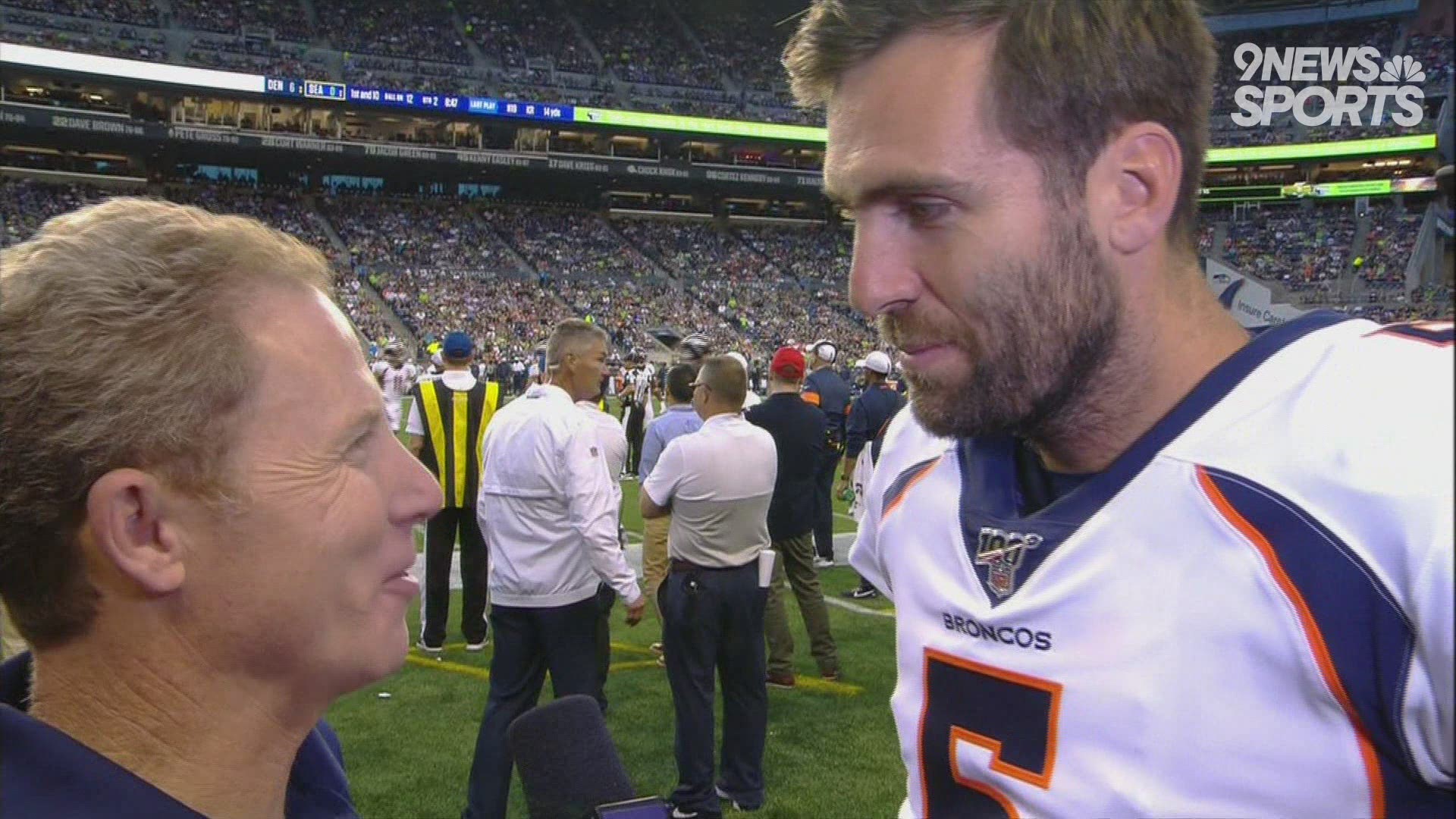 SEATTLE — Preseason games are broken up into segments.

There is the part when the starters play. A segment when its backups vs. backups. And then there is the period when the end-of-the-90-man roster players hustle, scrap, claw and fight in hopes of staving off the inevitable.

"There's nothing quite like the feeling of playing in an NFL football game," Flacco told 9News Rod Mackey during an in-game interview. "You get that adrenaline rush, you get to go through the first part of warm up, get out there and go through a series—it felt good."

The Broncos were up 6-0 late in the second quarter, but their third stringers were no match for Paxton Lynch in the second half. The former Bronco threw one touchdown and ran in another to lift Seattle to a 22-14 win at CenturyLink Field.

"I’m proud of him,'' said Broncos defensive end Derek Wolfe, who wasn't playing while Lynch was dealing in the second half. "I was talking trash to him on the sidelines because of what he said about us that we’re not a family and this and that. I think it was tough for him here coming in as a rookie with a complicated offense. I’m glad to see him over there doing well. That’s how it is, the NFL is one big family. You just want to see each other do well. I’m happy for the kid.”

Flacco and the Broncos’ first team offense had one series. They kept the ball for 12 plays and nearly 7 minutes while travelling 80 yards from their own 15 yards to the Seahawks’ 5, before the drive went backwards a couple yards and stalled into a 25-yard Brandon McManus field goal.

The drive included three short, conservative completions by Flacco. There was a drive-starting 10-yard run by running back Phillip Lindsay off a near-busted play. And there was a 50-yard burst through an enormous, third-and-1 hole up the middle by Broncos’ big back Royce Freeman.

“That thing just creased,'' Flacco said. "Royce hit it hard. He was expecting a little bit of contact and before you know it he was out of there.”

After the McManus kick for a 3-0 lead, Flacco, Lindsay and Freeman were through for the night.

"I think we did well," Broncos head coach Vic Fangio told 9News at halftime. "The group did well as a whole. We had a critical 3rd-and-1 play in there. I thought Joe looked comfortable."

Sure, it would have been nice if the Broncos finished off the drive with a touchdown. But it’s early August, not early September.

There was a third-and-long converting, 27-yard screen pass from Smith to Rashaad Penny. The D didn’t look good there. But zero is zero.

“That one screen killed us,'' Wolfe said. "Other than that it was good to get out there and go against somebody else.’’

And so segment one went to the Broncos, 3-0.

Broncos veteran Kevin Hogan, in what might be his final game as the No. 2 quarterback, had two series that resulted in no points.

Rookie Drew Lock then came in and immediately acquitted himself after last week’s shaky professional debut in the Hall of Fame Game. In his first series, Lock, too, led the Broncos on a 12-play drive that resulted in McManus’ second, 25-yard field goal.

“It wasn’t necessarily about showing everybody else,'' Lock said. "I wanted to  come out and play well for the guys in this locker room, this team, the coaches and for myself. It wasn’t anything I had to prove anything to myself.  It’s just as a competitor, as a quarterback that has to lead 10 other guys down the field, if you don’t play well it hurts you, but you really hurt for everyone around you. When  I left  the field today I thought today I made strides, made progress and I think the guys around me felt that as well.’’

Lock made a sensational third-and-11 throw to tight end Troy Fumagalli for 14 yards. Fumagalli ran an out pattern and didn’t see the ball until the last second but the ball was thrown to his hands and he managed to snag it for the first down.

“I had no choice,'' Fumagalli said. "It was a great throw. One of the more impressive throws I’ve seen.’’

Lock also converted a fourth-and-1 with an 8-yard run off an option keeper in the drive. Playing in a hostile environment even for a preseason game, Lock completed 5 of 7 on his first drive for 55 yards.

Smith answered with a drive for Seattle's No. 2 offense against the No. 2 Denver defense that ended with a 55-yard field goal by Jason Myers.

And then Lynch, the Broncos' first-round draft pick in 2016 only to be the final player cut from their 53-man roster prior to last season, took control of the second half. Lynch, who was 11 of 15 for 109 yards with a 6-yard touchdown pass to Jazz Ferguson, also ran four times for 38 yards, including a 9-yard touchdown scramble.

Lock later added a short touchdown pass to running back Devontae Jackson and 2-point conversion pass to Juwann Winfree. Lock finished 17 of 28 for 180 yards and a touchdown. He was intercepted near the 2-minute warning as he was hit as he threw.

Still, Lynch and the Seahawks won the third-string segment of the preseason game.

For the first time since suffering a calf injury on the first day of training camp on July 18, starting linebacker Todd Davis is expected to begin practicing on a limited basis next week. ...

The Broncos will not practice Friday or Saturday. They will finish out training camp with practices Sunday, Monday and Tuesday, then welcome the San Francisco 49ers for joint practices Friday and Saturday and their next preseason game Monday.