International science conference canceled at last-minute due to coronavirus

The American Physical Society March Meeting was set to being Monday morning and was canceled late Saturday night. 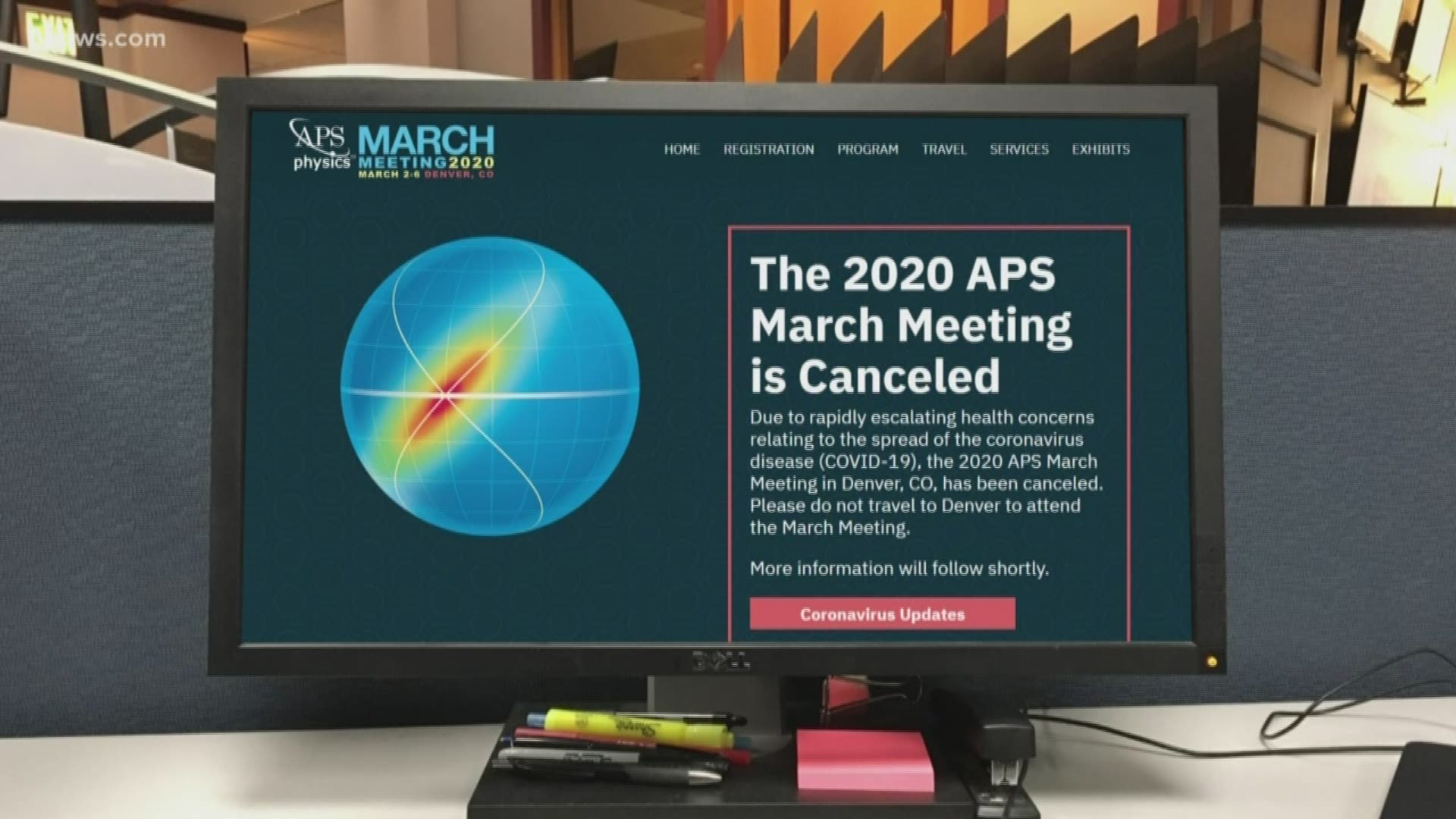 DENVER — An international physics conference touted as the largest in the world was scheduled for this week in Denver until organizers canceled the event on Saturday due to coronavirus.

The American Physical Society's (APS) March meeting, which is held in a different city each year, typically draws about 10,000 attendees from around the world. This year's conference was to run Monday through Friday at the Colorado Convention Center.

On Saturday, APS announced it was canceling the conference "due to rapidly escalating health concerns relating to the spread of the coronavirus disease (COVID-19)," according to its website.

RELATED: WHO: Coronavirus containment is 'feasible'

"It’s just, you know, taking an abundance of precaution to make sure that our meeting would not be a source of spreading the virus any further," said APS CEO Kate Kirby during a media phone conference on Sunday afternoon.

Kirby said the decision to cancel came when the CDC raised the warning level in South Korea and Italy to three on Saturday afternoon. She said the conference included around 500 people traveling from those two countries.

Before the conference was canceled, Kirby said about 800 attendees had already canceled themselves, but because of the timing of the cancellation, hundreds had already flown in.

"The last-minute cancellation was quite surprising," said Itamar Sivan, the CEO of Quantum Machines.  “Obviously we were very disappointed especially since we found out while we were on the plane from Israel to here.”

Sivan plans to invite anyone interested in their quantum orchestration platform to the Hyatt Regency for one-on-one demonstrations.

"We recognize that the timing of this decision has significantly inconvenienced many of you," the APS statement says. "However, this decision was made out of deep concern for the health and well-being of our registrants, staff, vendors, and the Denver community."

The APS CEO said the decision was made by their organization and they were not directed to cancel the conference by local or federal authorities.

In addition to the impact on the people who flew in, one local business is out thousands of dollars because of the cancellation.

"I have a big empty space now and it’s devastating," said Sandra Holman-Watts, the owner of Live At Jack's on the 16th Street Mall.

She was supposed to host the welcome party for the physicists.

Although APS has said it will pay for 65% of the cost of the party, Holman-Watts is still out $3,000 after ordering the food from a catering company.

With no time to cancel the order, she plans to donate it to a homeless shelter.

There have been no confirmed cases of coronavirus in Colorado as of the last week of February, according to the Colorado Department of Public Health and Environment.

As of Sunday afternoon, there have been 19 confirmed and presumptive cases of coronavirus in the U.S. and more than 88,000 cases worldwide.

RELATED: What you need to know about coronavirus in Washington state after patient dies in Kirkland

APS is a nonprofit organization that works to advance the knowledge of physics, and represents more than 55,000 members. The March meeting draws attendees from around the world in the areas of academia, labs and industry, according to APS.

The APS March meeting isn't the only large U.S. conference to be canceled due to coronavirus. CERAWeek, an energy event scheduled for next week in Houston, also announced its cancellation on Sunday.