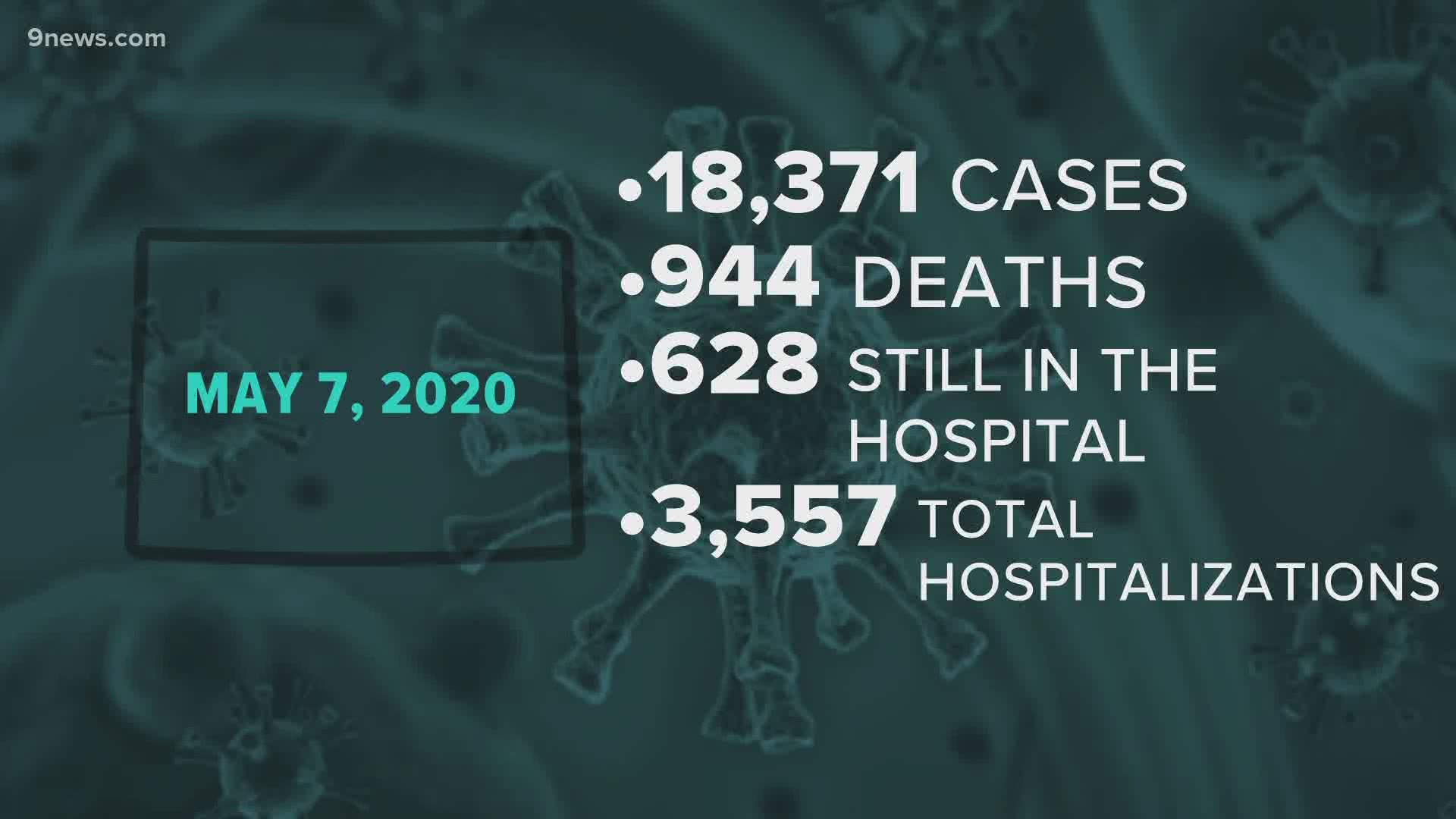 COLORADO, USA — The Colorado Department of Public Health and Environment reported 18,371 cases, 3,557 hospitalizations and 944 deaths. More data can be found below.

A restaurant in Centennial has been ordered to close after the Tri-County Health Department said it violated the stay-at-home order by allowing patrons to sit on the patio and not abiding by proper social distancing measures.

Catholics in Denver will be able to go back to mass starting this weekend, albeit in a very limited capacity.

Colorado's two field hospitals now have June opening dates, but health officials said they will not be staffed unless it is necessary.

They will remain on standby should a potential second wave of COVID-19 overwhelm traditional hospitals in the state. The capacity of the facilities at the Ranch in Loveland and the Colorado Convention Center in Denver has been reduced as well.

> VIDEO: The latest headlines from 9NEWS at 4 p.m.

In addition, more than 41,000 unemployment claims were filed in Colorado last week, and nearly 420,000 have been filed in the past seven weeks.

Those are among the coronavirus updates for the state Thursday. More details are below, and we'll continue to post information as it comes in throughout the day.

> Click/tap here to read updates from May 6.

The Waters Edge Winery and Bistro in Centennial was ordered to close by the Tri-County Health Department for violating a public health order.

"Despite the verbal and written warning, the winery continued to operate in a manner that violates the Public Health Orders and letting patrons sit at tables on the patio and not complying with social distancing requirements," a news release from the health department reads.

Waters Edge Winery is located across Arapahoe Road from the Streets of Southglenn. In the release, the Tri-County Health Department said it would allow the restaurant to reopen when it abided by its orders.

Archdiocese of Denver will allow limited masses starting this weekend

Public masses are resuming in the Archdiocese of Denver as soon as this weekend, with strict guidelines in place.

Archbishop Samuel J. Aquila's announcement says that there will be differences in how and when limited public masses are resumed at different parishes depending on parish size, available facilities and varying local public health orders.

A letter from bishops says that because strict physical distancing will be observed during mass, access to the masses celebrated over the next few months will be very limited.

"Since the faithful will continue to be dispensed from the obligation to participate in person at a Sunday Mass, those who make an effort to attend limited public Mass should not expect to do so with regularity and should be willing to attend on any day of the week," the letter says.

Parishioners are encouraged to check with the website of their home parish to see if and when masses will be offered.

You can read the full letter and see the full guidelines here.

Bed capacity will be reduced at Colorado field hospitals, grim news for businesses

Though field hospitals have been built at the Ranch in Loveland and at the Colorado Convention Center, officials said during the call that their capacity will be significantly reduced – and they won’t be staffed unless it’s necessary.

The 200-bed Colorado Convention Center hospital is slated to open on June 4, and the 200 beds at the Ranch could open on June 11. These will be on standby for a potential second wave of COVID-19, which could overwhelm traditional hospitals.

The Colorado Convention Center was once touted as holding up to 2,000 beds.

41,313 unemployment claims were filed in the state during the week ending May 2, raising to total over the last seven weeks to 419,547, according to the Colorado Department of Labor and Employment (CDLE).

$84.8 million in regular unemployment benefits were paid in the week ending March 2, down slight from the $86.1 million CDLE reports paying out the previous week.

CDLE reports that $65.6 million in Pandemic Unemployment Assistance PUA has been paid to gig and self-employed workers between April 20 and May 2.

$407.3 million has been paid out in the from of an additional $600 a week that is paid to all regular unemployment recipients and PUA recpients.

In Colorado, the CDPHE reports 18,371 people have tested positive for the disease caused by the novel coronavirus, COVID-19, up from 17,830 the day prior.

Of those who tested positive for the disease, 3,557 hospitalizations have been reported, up from 2,986 the day prior.

Please note that there may be a lull or spike in reported case data due to how it's reported. CDPHE data changes as labs, hospitals, facilities and local agencies report their own data. For example, a spike in the number of deaths does not necessarily mean that that many more people died within 24 hours, but rather is indicative of when the data is entered into the system. New data is released daily at 4 p.m.

As of 4 p.m. on May 7, 628 patients are currently hospitalized with the disease, according to the most recent data from the Colorado Hospital Association. Within the last 24 hours, 68 patients have been transferred or discharged.

RELATED: The specifics of each Colorado county's safer-at-home orders