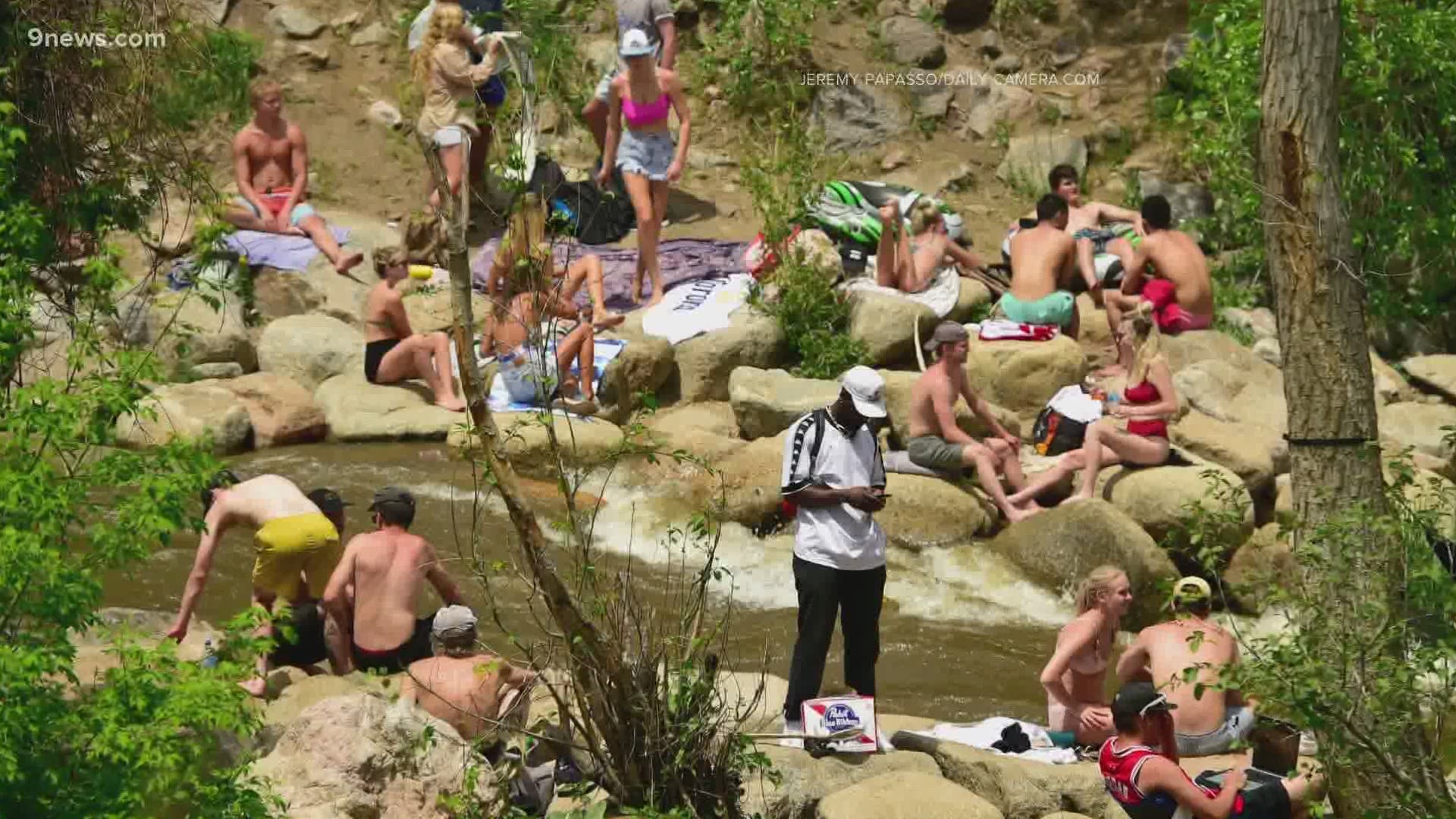 BOULDER, Colo. — Boulder is closing a large stretch of park land near Boulder Creek after photos and videos showed crowds congregating there earlier in the week.

The closure impacts all park land and creek beds north of the Boulder Creek Path from the eastern boundary of Eben G. Fine Park to the western boundary of the city, according to a news release.

“This closure is necessary and disappointing, as it removes access to the creek for everyone due to the poor choices of some," Boulder Parks and Recreation Director Ali Rhodes said in a news release. "We sincerely hope community members can recreate responsibly, honoring current public health orders, so that the amazing public lands Boulder offers can remain open, and community members and staff can be safe."

Temperatures on Monday and Tuesday exceeded 90 degrees, bringing crowds to the beaches at Colorado’s state parks and along riverbanks. The photos of Boulder Creek were taken near the University of Colorado-Boulder campus.

Enforcement efforts for the closure will focus on education rather than immediately giving citations. Groups of more than 10 people will be dispersed.

“We continue a strong educational approach to emphasize wearing masks and social distancing of six feet or more to encourage personal responsibility rather than issue citations,” Boulder Police Department spokesperson Laurie Ogden wrote in a statement to 9NEWS.

Credit: Jeremy Papasso/dailycamera.com
Trash is seen piled up in a trash can on the Boulder Creek Path on Tuesday, May 19, 2020 in Boulder. (Jeremy Papasso/Staff Photographer)

RELATED: Mount Evans Highway won’t open until at least July due to COVID-19

The crowds prompted Colorado state parks to close beaches altogether for the foreseeable future. 9NEWS asked Boulder’s parks and recreation department if it had a similar plan in mind, but did not receive a response as of this writing.

“I know it’s been difficult, but the video of people clearly gathering along the creek not only shows groups larger than 10 people, but there was also not adequate social distancing,” Zayach wrote. “Situations like these not only violate the state and local public health orders, but they put our whole community, our businesses and our economy at risk.

“Please remember that it takes up to 14 days before we see who will become sick and spread the disease from this large gathering of people along the creek. Please take this virus seriously and limit gatherings to 10 people or less and remain at least six feet from each other. Individual actions are putting our businesses and our most vulnerable in the community at further risk.”

Credit: Jeremy Papasso/dailycamera.com
Families enjoy the warm weather at the Boulder Creek on Tuesday, May 19, 2020 in Boulder.

Credit: Jeremy Papasso/dailycamera.com
=Crowds of people not wearing protective masks or social distancing are seen at the Boulder Creek on Tuesday, May 19, 2020 in Boulder.