Colorado has 2nd most Delta variant cases in US, health officials say

The Delta variant is considered more contagious and could make patients sicker, which makes vaccination more important than ever, according to CDPHE. 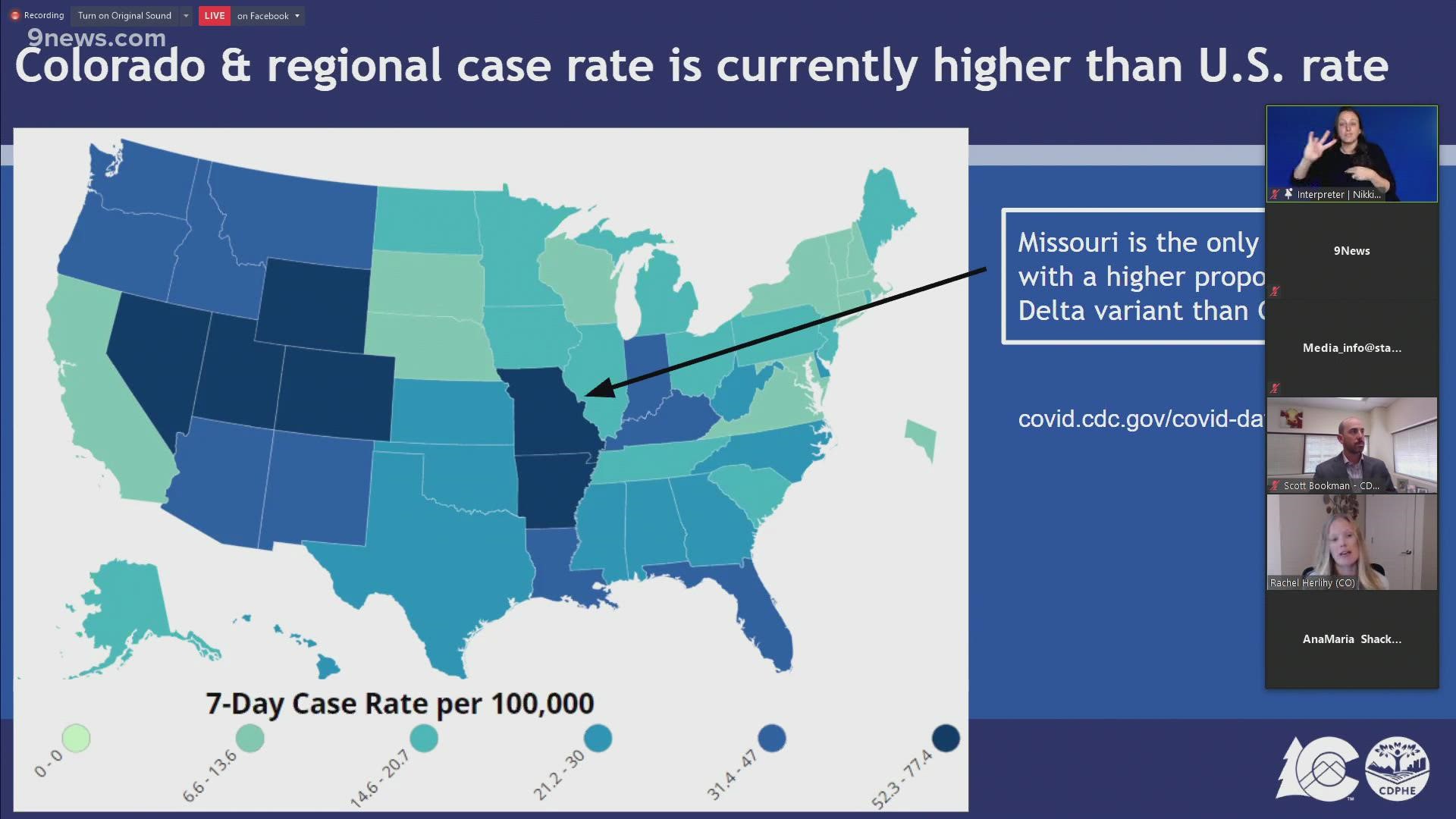 COLORADO, USA — In Colorado, 40% of new COVID-19 cases are the more contagious Delta variant, and those who are infected are more likely to be hospitalized, making vaccinations more important than ever, state health officials said on Monday.

Nationally, the Delta variant makes up about 10% of cases, which is much lower than the variant's prevalence in Colorado, Herlihy said.

Missouri is the only state that has more cases of the Delta variant than Colorado, according to data from the Centers for Disease Control and Prevention (CDC).

"If you were exposed to COVID-19 now and were infected, your chances of being hospitalized now are much higher than earlier in the pandemic," Herlihy said.

The Delta variant was originally detected in India and has since spread worldwide. Delta is more contagious and can make patients sicker, according to health officials. The Centers for Disease Control and Prevention (CDC) predicts that the Delta variant will become the dominant strain in the U.S. by August.

The first Delta variant cases in Colorado were detected in early May in Mesa County. That county's public health officials told 9NEWS' Anusha Roy that Delta became the dominant strain of COVID-19 in the county within a few weeks of its detection.

Mesa and Garfield counties currently have the highest number of unvaccinated residents and the highest rate of hospitalizations in Colorado, according to CDPHE. Bookman said that the western and northwestern areas of the state are currently seeing an increase in use of ICU beds, while that rate is decreasing in the rest of the state.

"Vaccines continue to be highly effective," she said. "We continue to see high levels of effectiveness for all age groups in the state."

Earlier this month, Herlihy said that data on vaccine efficacy against the Delta variant showed the Pfizer vaccine was 88% effective and Moderna's vaccine had about the same effectiveness.

Officials emphasized the importance of people getting the second dose of the Pfizer and Moderna vaccines, which increases protection against the Delta variant.

There wasn't a lot of data for Johnson & Johnson because most of the data on the Delta variant has come from the United Kingdom, where the J&J vaccine is not available, health officials said.

RELATED: US likely to miss goal of 70% partially vaccinated by July 4