The governor made the announcement Friday and said phase 1B.4 will now begin on March 19. 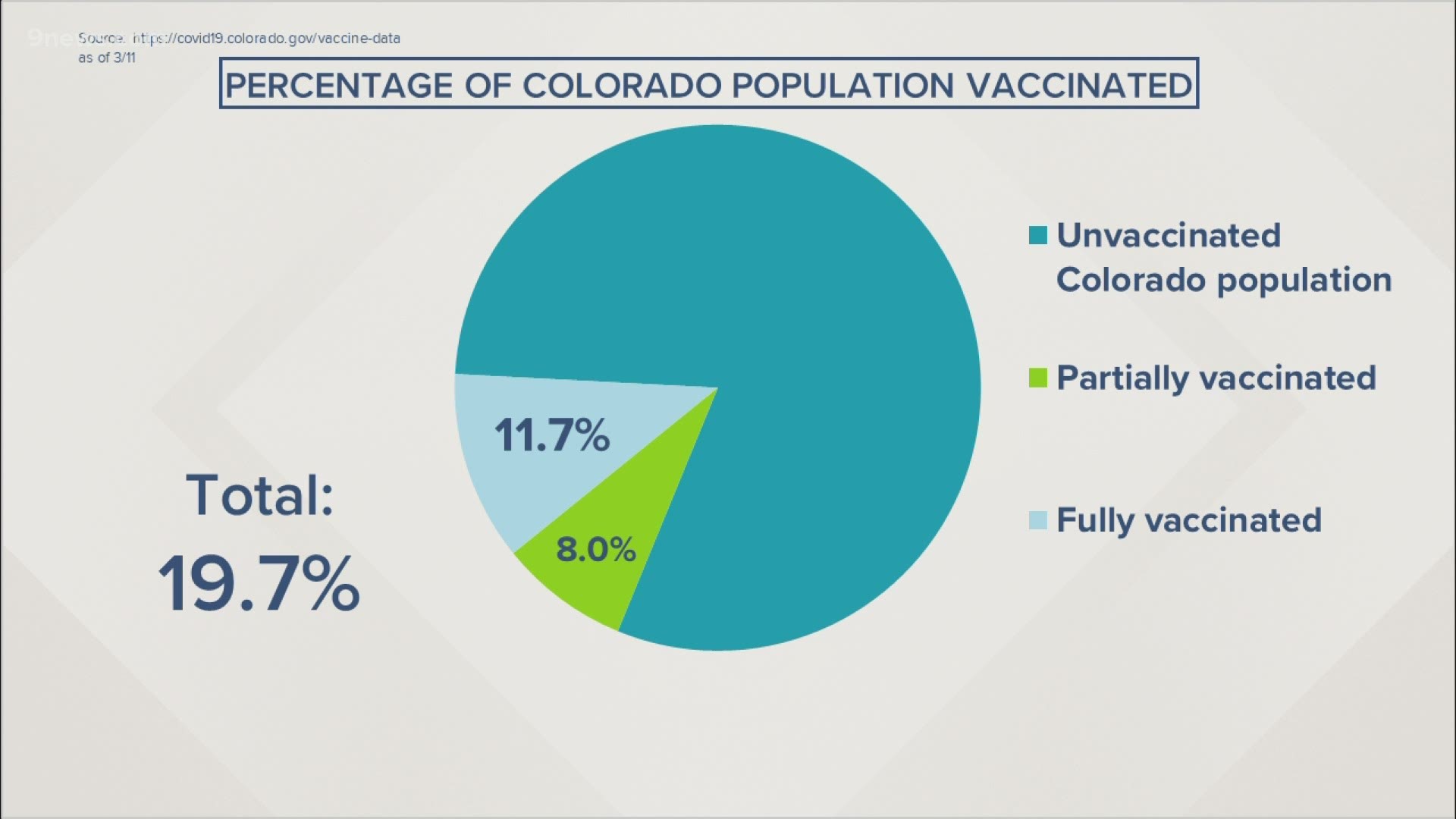 DENVER — The general population of Colorado will be eligible to receive the COVID-19 vaccine by mid-April, the governor announced Friday, depending on the vaccine supply.

"What we're able to say today, is that we have a very high degree of confidence and we're willing to say that by mid-April every Coloradan will be eligible, " Gov. Jared Polis (D-Colorado) said.

He said in the next few weeks once they have a better handle on the future vaccine supply they'll be able to pinpoint a specific date in April.

"We are in for a more or less normal summer. It will be a lot more normal than last summer. Folks will be confident in their protection," Polis said. "I would with a great degree of confidence sign my own kids up for summer camp."

Polis also announced at his Friday briefing that people in Phase 1B.4 will become eligible on March 19, two days earlier than previously announced. He said more information would be provided by March 17 about how those people can sign up and that people in that group likely won't be able to sign up just yet.

Phase 1B.4 includes people 50+, restaurant workers, other essential workers, and those 16 to 49 with one of the listed high-risk conditions. Eligible employees should work with their employer and that eligible individually should go through a provider or pharmacy Polis said. In all this phase includes about 2.5 million people.

As more people become eligible, Polis said the state would stand up six clinics across the state to deal with the surge in demand that likely can't be handled by the pharmacies or healthcare providers.

"By mid-April we're expecting over a half-million doses per week that's why we're getting these community vaccination sites established," said Sherman. "We're going to need those community vaccination sites to make sure that we get all the vaccine that we receive weekly, we're able to administer it and get it into Coloradan's arms so that we can well on the way to getting the population vaccinated."

The six sites include:

Watch below:  Polis provides update on COVID-19 vaccinations in Colorado 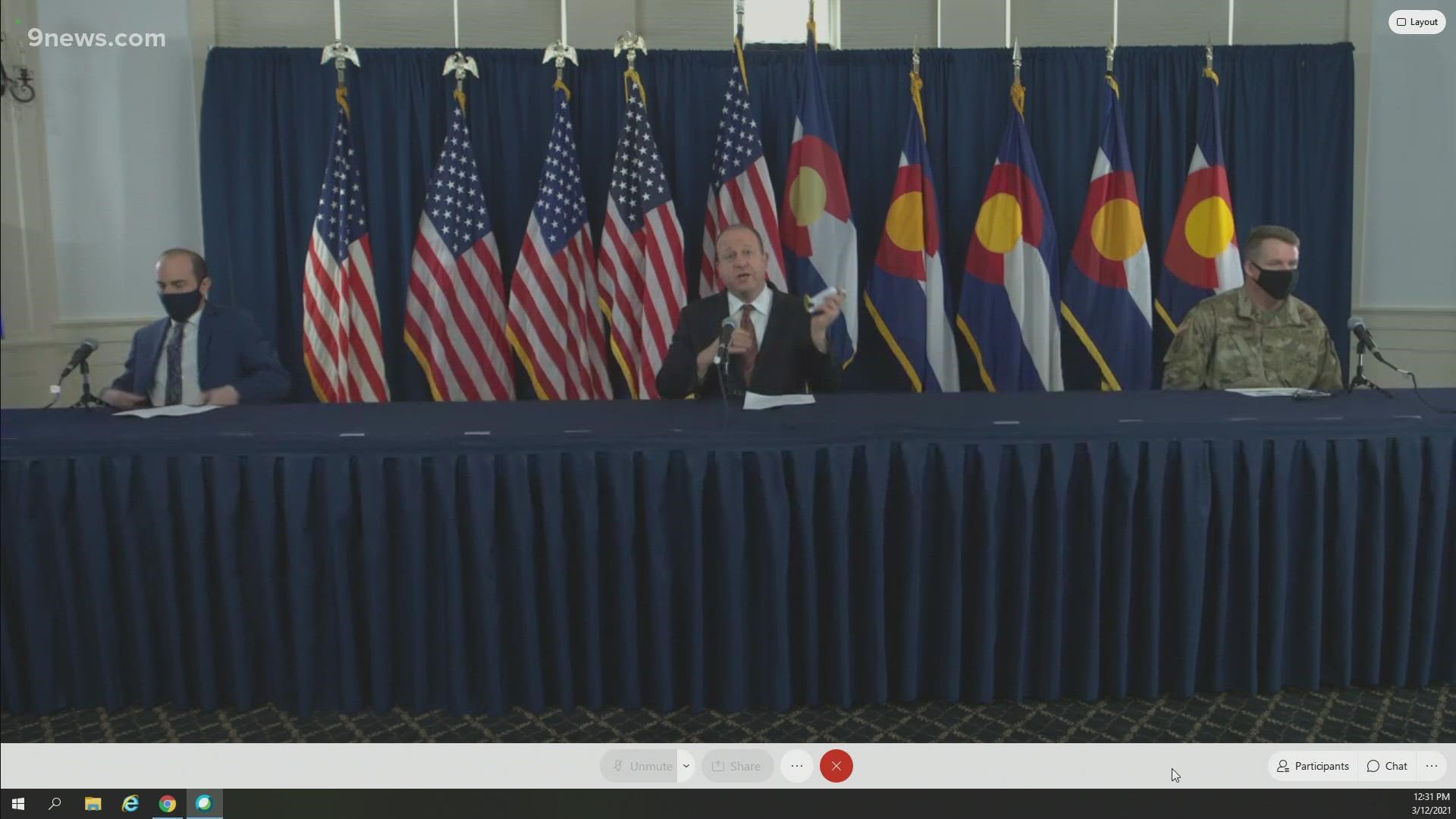 They'll be able to vaccinate up to about 6,000 people per day but will likely start with less and ramp up as the vaccine supply increases. The plan is to operate them for six to eight weeks to deal with the sudden surge in demand.

Bookman said Friday that they're looking at guidance from the Centers Disease Control and Prevention (CDC) about nursing homes and they'll be updating state guidelines to allow "significantly more indoor visitation" in the coming days.

Multiple providers have canceled vaccine clinics due to a snowstorm forecasted to significantly impact the state. State leaders said Friday that pharmacies have agreed to make sure anyone whose appointment is canceled this weekend will get rescheduled as soon as possible.

Sherman said they'll not overly concerned about vaccine doses being wasted due to canceled appointments because there are updated guidelines that allow the Pfizer vaccine to be refrigerated for up two weeks or even refrozen.

RELATED: 5 things to know about the winter storm headed to Colorado this weekend

Nearly 20% of Colorado's population has received at least one dose of a COVID-19 vaccine, according to the latest data from the state. Last week, people over 60 and essential workers, including grocery store workers, became eligible for a place in line.

Polis said 76% of people age 70 and older have now been vaccinated in Colorado.

"We are encouraging providers to prioritize those 70 and up," Polis said. "It's important to know if you are 65 and up, 70 and up, just because the eligibility is expanding doesn't mean that you are not prioritized," Polis said.

During an address to the nation on Thursday night, President Joe Biden called for every American to be eligible for a vaccine by May 1.

RELATED: President Biden sets May 1 target to have all adults vaccine-eligible

Polis has previously said that Colorado has the capacity to administer many more vaccines than it has, but it has been limited by the available supply.