Polis temporarily moves last call for alcohol to 10 p.m. due to COVID-19 surge among young people

The governor said cases in Colorado are up among those between 20-29. He also said 15 counties have been told to present COVID-19 mitigation plans. 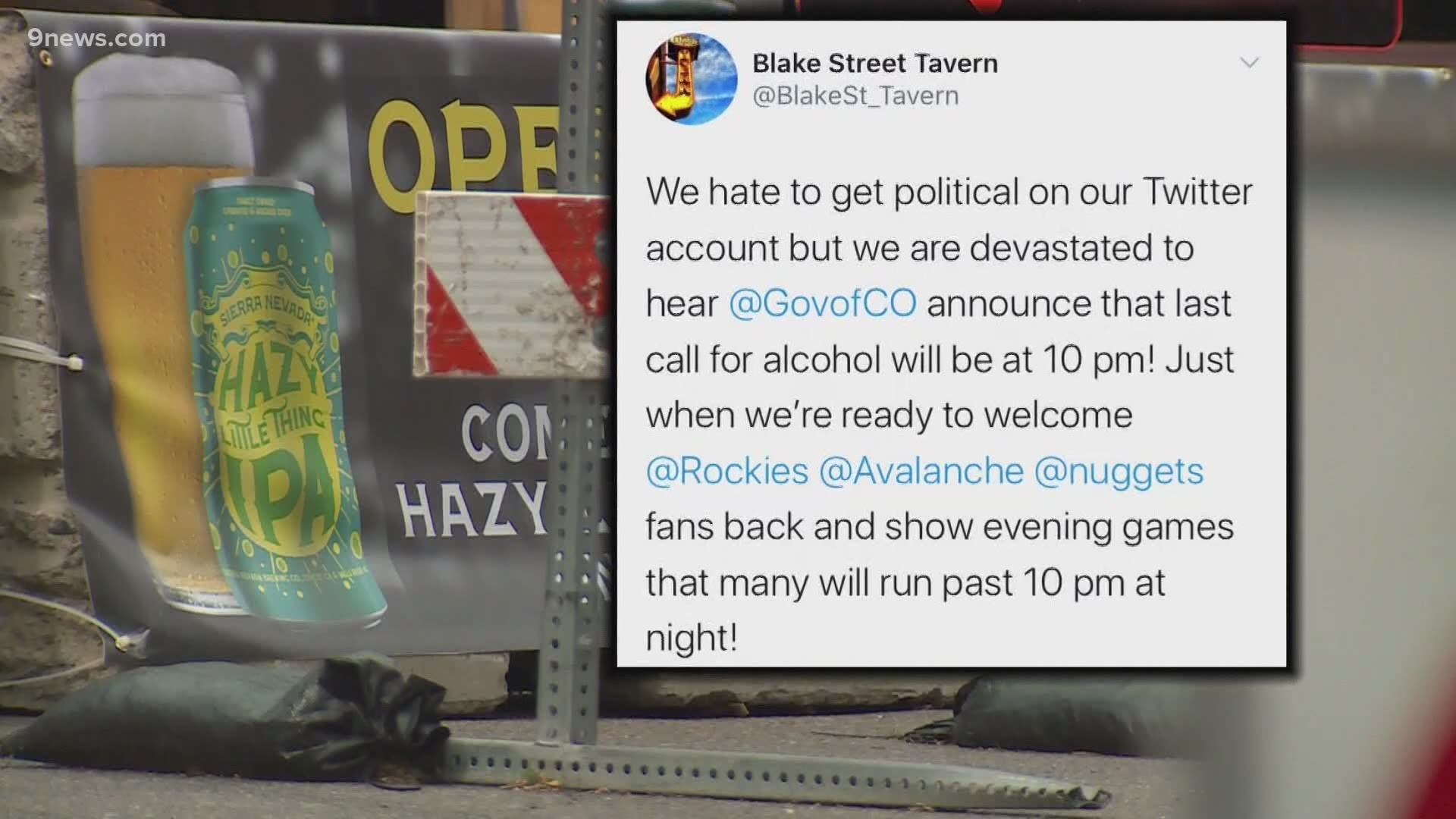 DENVER — Citing an uptick in COVID-19 cases among people between 20-29 years old, Gov. Jared Polis (D-Colorado) announced Tuesday that for 30 days, last call for alcohol in the state’s bars and restaurants will move from 2 a.m. to 10 p.m. beginning Thursday.

“Smaller corrections like this coupled with responsible behavior from Coloradans for all ages is what’s going to make the difference,” Polis said. 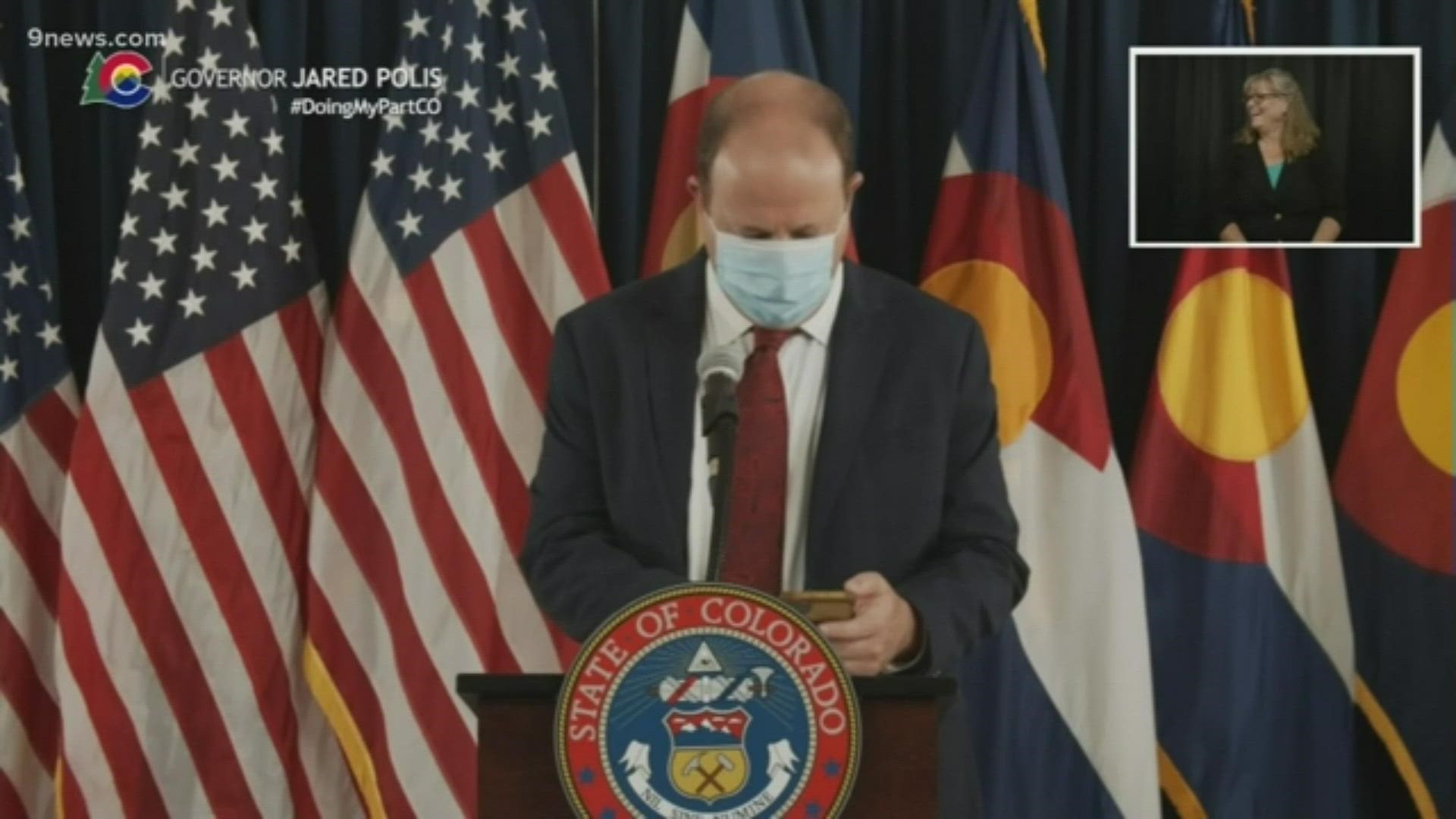 Colorado’s bars and nightclubs that don’t serve food have already been ordered to close. Polis said he was concerned about young people getting inebriated and losing their inhibitions about social distancing and mingling with other parties in the places that have stayed open.

Despite this latest order, Polis acknowledged that many outbreaks among young people have been at private parties. He said closing bars was about showing this is the “summer of no parties” and that nightlife should be largely discouraged.

“We’re very serious that young people should be getting together in small groups and not large groups for the duration of the summer and fall as the state addresses the pandemic,” Polis said.

The governor also said that in the future when there is a COVID-19 treatment or vaccine, he hopes to allow counties to have last calls beyond 2 a.m.

Some owners of restaurants and bars said they're irritated, too, and disagree with the governor's decision to move up last calls.

Mark Berzins is the CEO of Little Pub Company which owns 21 bars across the Denver Metro Area. He said he doesn't believe "there’s any correlation" between the spike in cases and "young people flocking to go out." Berzins said his bars' sales over Independence Day weekend are proof of that.

"4th of July, for example, our sales were down 50% from the Saturday just before," Berzins said.

"We hate to get political on our Twitter account but we are devastated to hear [Polis] announce that last call for alcohol will be at 10 p.m.," the restaurant tweeted. "Just when we're ready to welcome Rockies, Avalanche, Nuggets fans back and show evening games that many will run past 10 p.m. at night."

BST PATRONS! We, along with 200+ Restaurant Owners as part of the Tavern League, are going to fight ⁦@GovofCO⁩ Executive Order to cease Alcohol Sales at 10 pm nightly for 30 days effective this Thursday. Litigation coming tomorrow! Stay tuned! https://t.co/Y5m6nnBh6a

The general manager of Tracks nightclub Isaac Domingue said he understands Polis' decision, but that doesn't make it any less tough on businesses like his. He said, "the later moments are generally your more profitable ones."

"As soon as we learned of the announcement, we were all just working tirelessly to figure out how we can adjust the business to accommodate for the change," Domingue said.

He said Tracks is normally open from Thursdays through Sundays. Due to the loss of the extra hours though, he said the nightclub will temporarily open on Wednesdays, too.

"That extra day is going to help and it’s kind of what we have to do," he said.

Before Polis made this announcement, Colorado Department of Public Health and Environment (CDPHE) Executive Director Jill Hunsaker Ryan outlined the data the state is using to track localized outbreaks.

Fifteen Colorado counties that have received variances from the statewide safer at home order have experienced enough of an increase in novel coronavirus activity that they’ve been told they need to present a mitigation plan or else backtrack on their reopenings.

Ryan said eight of those counties (all of which were rural) opted to revert back to the statewide order in lieu of backtracking on their reopening.

The state has already put a two-week pause on new variances in an effort to slow the spread of COVID-19.

“If we can control the spread of the disease at a countywide level, it reduces the need for statewide disruption,” she said.