Here are all the Colorado grocery stores with COVID-19 outbreaks

16 grocery stores across Colorado have confirmed outbreaks of COVID-19, and as many as 800 people have died in nursing homes, according to CDPHE data. 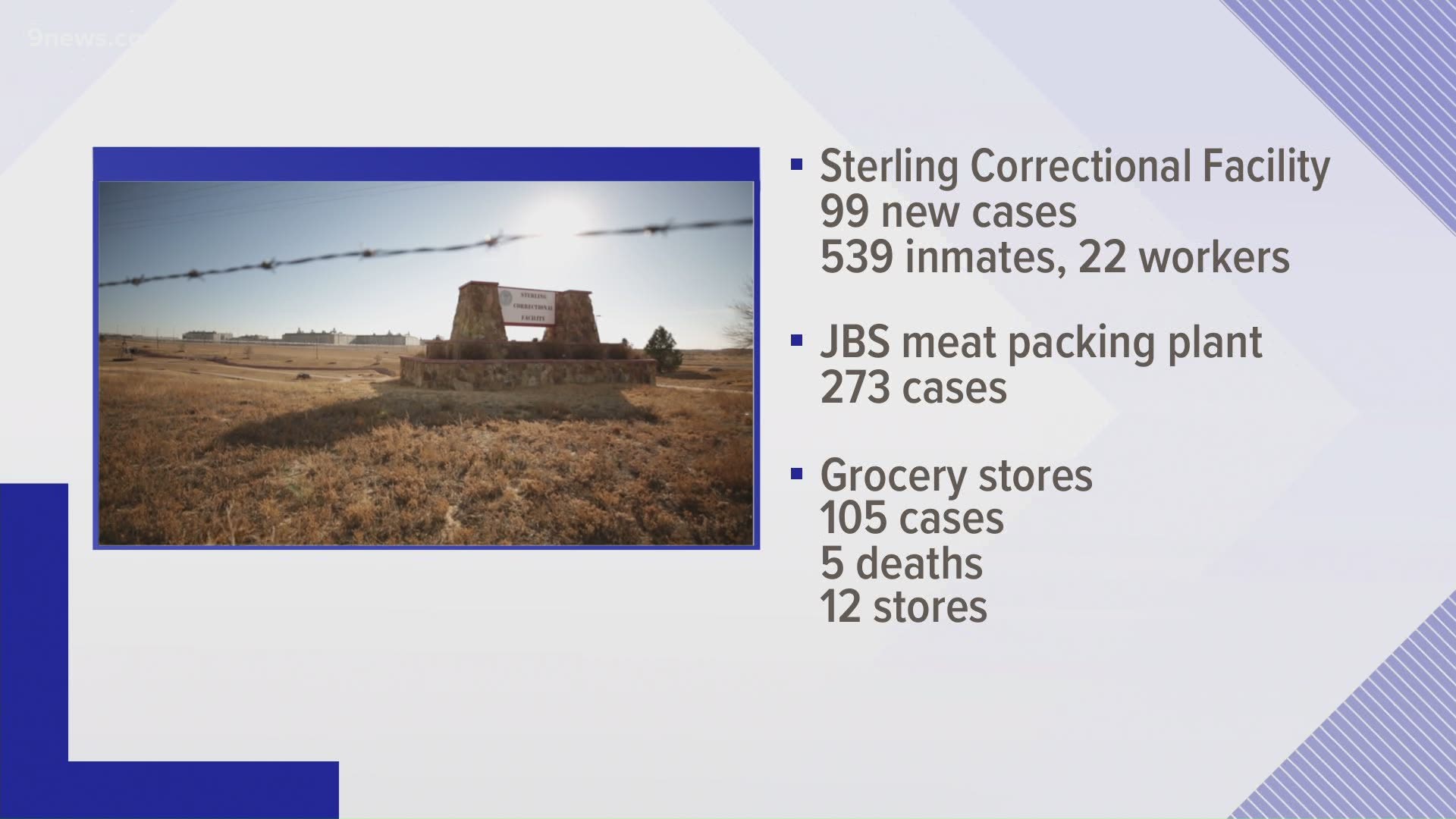 There have been 129 confirmed cases of COVID-19 among grocery store employees in the state, and 23 that are probable. Two employees at the Capitol Hill King Soopers have died, as well as two at a Walmart in Aurora.

Nursing homes and correctional facilities continue to be the epicenters of the COVID-19 pandemic in Colorado. Information on those growing outbreaks are below. As many as 800 people have died in nursing homes and other healthcare facilities throughout the state.

RELATED: Here are the grocery stores, restaurants and other facilities with COVID-19 outbreaks in Colorado

RELATED: COVID-19 outbreaks have been confirmed at these 10 Colorado grocery stores

Here’s a look at grocery stores with confirmed COVID-19 outbreaks:

Confirmed staff cases: 9 (up one from last week)

Somewhere in Adams County, no store number in data.

Confirmed staff deaths: 2 (one death has been removed from the data since last week)

Nursing homes continue to be the epicenters of the COVID-19 pandemic in Colorado.

There are 3,855 confirmed COVID-19 cases and 651 confirmed deaths among residents, staff and attendees in healthcare facilities (like nursing homes or assisted living facilities) in Colorado. This is a rise of 40 deaths over last week.

That means at least 14% of confirmed statewide cases and 43% of statewide deaths happened in a healthcare setting.

Statewide, outbreaks have accounted for 6,425 confirmed COVID-19 cases in Colorado. At least 687 people have died after a COVID-19 diagnosis in 292 outbreaks across Colorado.

Including 148 probable deaths, there are 799 total deaths in healthcare facilities across the state.

Cherry Creek Nursing Center continues to have the deadliest outbreak in Colorado, with at least 27 deaths. The facility did not add any new deaths, but there was one more confirmed case and three more probable cases at the nursing home since last week.

Compared to last week, one more inmate died after a COVID-19 diagnosis in Sterling. There are 21 more confirmed cases at the facility.

There seven more confirmed cases at the Van Cise-Simonet Detention Center. Ian Dickson, CDPHE spokesperson, said in an email that the state changed the way they keep track of cases in jails to those that occur within the facility, not if people are coming into a jail or prison already with it.

"Our outbreak data is meant to detect and measure spread inside a facility that has an outbreak," Dickson said. "These updated numbers reflect COVID-19 transmission within the facility. The facility continues to isolate and treat inmates who are identified to have COVID-19 on booking, though they are no longer included in the outbreak data."

The number of cases in Van Cise-Simonet went down drastically since there were at least 208 cases as of May 20.

According to Dickson, in other instances outbreaks may have decreases in cases or deaths compared to weeks prior because there were "errors in previous reports or learn new information about cases."

For example, a death at a Walmart in Arapahoe was subtracted because a "household contact" of an employee was included when data should have been limited to workers.

According to CDPHE, a coronavirus outbreak is considered over when 28 days have passed without a new case of the virus.

There were 45 resolved outbreaks in healthcare facilities like nursing homes and assisted living facilities, but there are still 118 active outbreaks.

Editors note: The outbreak at the King Soopers in Adams County was mislabeled at nine, when actually it is four confirmed cases. We regret the error.